The new feature is called Custom Audiences and is available through Power Editor and the Facebook advertising API.

What does this mean and how can you use it? Let me do my best to explain…

You can now export that email list into a one column CSV file and upload it into a Custom Audience within Power Editor. Then, Facebook will match up the email addresses with current Facebook users to serve your ads to only those people.

You can still layer on other targeting as well. So you could target only those users in your email list who aren’t currently a Facebook Fan, live in the US and are female.

There are rules that you need to follow when targeting ads at Custom Audiences. And to be honest, I’m still digesting exactly what the rules mean, what would be allowable and what would be a violation.

I’ll cover that in more detail later. Until then, you should certainly be careful about how it is you use your customer data. If you’ve determined that you can use that data for Facebook advertising, this has significant potential for you since you’ll be reaching people who are already close to your brand.

First, you need to use Power Editor, a Chrome plugin, or a third party application that utilizes the Facebook advertising API. If you haven’t used Power Editor before, read this blog post: How to Use Facebook Power Editor.

Within Power Editor, you will now see a new main navigation item for Custom Audiences. Click on that and then click Create Audience. 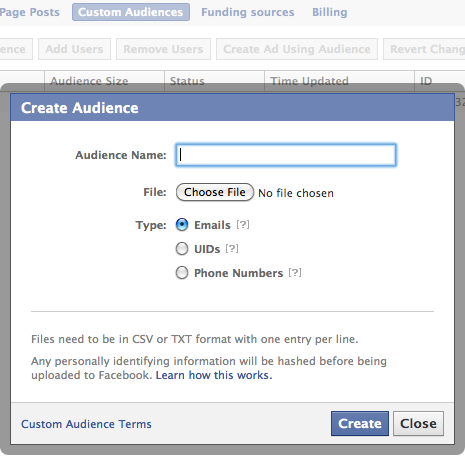 First, name your audience. Then select whether you are uploading a file of email addresses, phone numbers or Facebook ID’s. In each case, make sure that it is a CSV or TXT file with only one column and no header row. Then upload the file.

Next, highlight that Custom Audience you created and click the Create Ad Using Audience button. You will now create an ad the way you normally would, but the Custom Audience is now automatically added within the new Custom Audiences ad creation step.

As you can see, you can also exclude targeted users by Custom Audience. If you have very segmented email lists, this could come in handy.

I could spend another 2,000 words covering this new feature, but I’ll instead break this up into separate posts. Following are some topics that will be covered at another time:

Whenever I read a Facebook or blog post about Custom Audiences when it was first announced, the majority of comments voiced concern over privacy. I don’t think that privacy is a problem, but Facebook will need to explain why that’s the case. People will need to be educated on exactly what is happening with this data.

So far, I’ve heard nothing but good things about the impact of using Custom Audiences for Facebook ads among the big brands that previously had access. But what about the little guys, now that they can use it? My guess: No ads will be more effective than those using Custom Audiences. It’s possible that such ads will be even more effective than those targeted at your current Fans.

Sure, this is a great new tool. So what are some ways that you can apply it? I have a few ideas.

I have strong suspicions that Facebook plans to eventually charge for this feature, just as they are now with Offers. There’s a not-so-subtle clue in the Facebook Help Center, under “What does it cost to use this feature?”

Yes, currently. And if it’s as effective as I expect it to be, Facebook will certainly charge for it and many advertisers will be willing to buck up.

Have you started using Custom Audiences yet? In what ways do you plan to use them?