Back in February, I covered the challenges facing different types of businesses when it comes to domain verification, the 8-event limit, and conversion optimizationHow you optimize impacts who sees your Facebook ad. Facebook will show your ad to people most likely to perform your desired action.. It looks like there may be a glimmer of hope for some e-comm businesses, particularly those using Shopify.

Understand that this entire situation is fluid. Facebook established Aggregated Event Measurement, the 8-event limit, and other protocols in response to iOS 14 and privacy rules related to tracking. Facebook’s actions have been largely reactionary, and we should expect many changes and adjustments as we go.

This would impact many businesses and advertisers, as such a scenario is common. By forcing advertisers to optimize for another action (like link clicksThe link click metric measures all clicks on links that drive users to properties on and off of Facebook., landing page viewsLanding Page View is a Facebook ads metric that represents when people land on your destination URL after clicking a link in your ad., or engagement), it would likely lead to poorer conversion results. It appears that, while a solution may not currently exist, an exception — for Shopify, at the moment — has been developed.

Let’s walk through what you need to know…

Within Facebook’s documentation on domain verification for developers, an interesting amendment was added to the bottom.

If that doesn’t make sense to you, Facebook provides a use case:

For fun, let’s replace “myplatform.com” with “myshopify.com.” We can do that since “myshopify.com” is indeed on the Public Suffix List.

The Public Suffix List is a list of all commonly used web address suffixes. I know, that doesn’t mean anything. But examples include .com and .co.uk.

I can’t say I know a whole lot about this list. But what I can tell you is that it’s extensive, and it includes a whole lot more than simple suffixes. Most importantly for the readers of this post, it includes myshopify.com…

If you are a Shopify vendor, you may utilize a myshopify.com subdomain where your shop lives and sales occur.

Of course, it’s entirely possible that you utilize a different subdomain that may be covered under the Public Suffix List. You can view the entire text file here.

But Does it Work?

Of course, this all sounds great. But I wanted to test that you could actually verify a myshopify.com subdomain, configure events, and optimize for conversions happening on that subdomain. So, I decided to test it.

All of my conversions occur on domains that I own and control. But, I set up a Shopify test account to see if this would work. I quickly realized some pretty big problems.

After waiting about an hour and clicking around to send some event data, the subdomain I created appeared on my Event Configurations list.

According to Facebook’s documentation, I should be able to verify jon-loomer-digital.myshopify.com because “myshopify.com” exists on the Public Suffix List. Well, I don’t think I’m able to do that.

When I clicked the “Verify Domain” button, I get the following message… 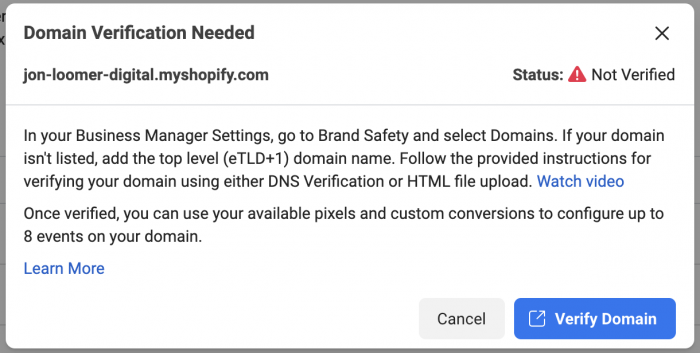 This error message is essentially saying that I need to verify the myshopify.com domain, which I clearly cannot do. We can assume this message doesn’t account for the Public Suffix exception, and that I should still be able to confirm this subdomain. But, that ignores what’s required of verifying a domain.

To verify a domain, you need access to one of the following:

While the first may be more common, I don’t think this is currently possible for Shopify vendors. Even if it is, Facebook seems to be phasing out that option (you may not have it).

The other two are most common for those who have full control of the domain — which is intentional so that only domain owners can prove that they own the domain.

Unless I’m missing something, this isn’t an immediate solution for Shopify vendors. But Facebook created this exception for a reason. Shopify added “myshopify.com” to the Public Suffix List for a reason. This is likely something in development — by Facebook, Shopify, or both.

And really, this is something that is likely on the radar of many platforms like Shopify that are surely flooded with requests right now connected to these updates related to iOS 14, domain verification, and conversion optimization.

It’s possible that “myshopify.com” hasn’t yet been verified, and this action would trigger the ability of the subdomains to do the same. Since my Event Configurations page should indicate if a domain is owned by someone else (and it doesn’t say that now), this step doesn’t appear to have happened yet.

It may also make sense that once the “myshopify.com” domain is verified, any advertisers with a single pixel on a subdomain will be able to configure their events, even without verifying the subdomain. Technically, this is how it currently works for domains with a single pixel — Facebook recommends verification, but it isn’t required.

The good news is that Facebook is aware and solutions appear to be on the way. Stay tuned.

Do you sell products on a domain that you don’t own or control? Anything you can add?