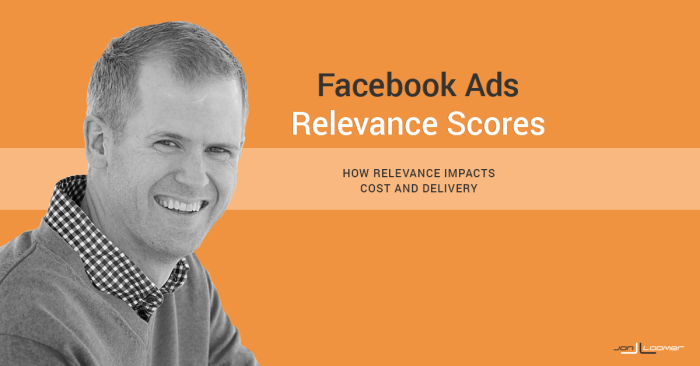 Relevance has always contributed to cost of distribution and whether your ad is shown to your target audience. But now, with the roll-out of relevance scores, Facebook reveals more about an ad’s relevance to the advertiser to help make informed decisions.

In this post, we’ll take a closer look at what relevance scores are and what they mean to your advertising.

[Tweet “Facebook rolls out relevance scores to help you optimize your ads. Here’s what you need to know…”]

What is a Relevance Score?

Advertisers often struggle to understand why Facebook prefers certain ads within an ad setAn ad set is a Facebook ads grouping where settings like targeting, scheduling, optimization, and placement are determined. over others. This will now become less of a mystery thanks to the relevance score.

While there are numerous metrics to distract an advertiser who is trying to determine what is working and what isn’t, the relevance score tries to balance the positive and negative into one single metric. It provides insight into what Facebook is seeing — and why an ad may be delivering the way it is.

Sound like voodoo? Well, let’s take a closer look at how this is figured out…

How is Relevance Score Calculated?

While Facebook says they use relevance score to determine “expected” interaction with your ad, I assume this can only be based on actual previous interaction. Facebook can only predict the future based on interaction that has already occurred — and that would be consistent with the 500 daily impressions minimum to receive a score.

Relevance scores are updated in real-time, so you may see different scores from day-to-day. This is a great thing as it will help advertisers spot both positive and negative trends regarding interactions with their ads. A dip may be an indication that it is time to refresh the creative, for example.

What is Positive Feedback?

A heavy influencer of the relevance score is positive feedback.

A rating based on the number of times your audience took a desired action after seeing your ad, such as shared or liked it, or helped you achieve your objective, such as visiting your website. When positive feedback is high it means people are responding well to your ad.

Positive feedback is based on positive actions associated with your ad, including commenting, liking and sharing. Possibly more importantly, this includes actions directly related to your campaign objectiveThe campaign objective is the ultimate goal for your Facebook ad. Your selection will impact options, including optimization and delivery.. For example, link clicksThe link click metric measures all clicks on links that drive users to properties on and off of Facebook. for the clicks to website objective or video views for the video views objective.

This is somewhat ambiguous. It’s not clear how Facebook weights each action, depending on the objective. That ambiguity is intentional, of course, as it prevents manipulation.

What is Negative Feedback?

A rating based on the number of times your audience hid your ad or otherwise indicated a negative experience such as choosing not to see ads from you. When negative feedback is high it means people don’t want to see this ad.

Negative feedback is not a new metric, of course. It’s been a thorn in marketers’ sides for years. It includes any negative interaction with your ads, such as hiding or reporting them. One can assume that as negative feedback rises, relevance score drops — that drop in relevance score may be joined by a drop in distribution and an increase in price.

Something I want to call out about Facebook’s definition of negative feedback for this purpose is this: It is based on the number of times “your audience” reacted negatively to an ad. This is good because we know that ads that get great engagement will also reach people organically — thus those who were not targeted. Negative response from these people would be expected, but that does not impact the negative feedback score.

Some keys to a high relevance score, according to these examples, are as follows:

Relevance is Not the Only Factor

Keep in mind that an ad’s relevance score won’t always matter when it comes to how your ad is delivered and at what cost. Ads with guaranteed delivery (those purchased through reach or frequencyCalculated as (Impressions/Reach), Frequency is a Facebook ads metric that measures the average number of times users have seen your ad.), for example, are not impacted by the relevance score of an ad.

In other words, if you choose to optimize for impressions or daily unique reachDaily Unique Reach Facebook ads optimization allows you to limit the number of times you reach your audience to no more than once per day., don’t expect relevance score to impact delivery or cost. Facebook is simply going to show it to the most people within your target audience as is possible.

Relevance score also has less impact on delivery and cost of local awareness campaignsThe campaign is the foundation of your Facebook ad. This is where you'll set an advertising objective, which defines what you want your ad to achieve. since they are optimized for impressions rather than any specific action. Once again, Facebook wants to show your ad to as many people within a given radius as possible — only impressions matter to distribution, not the actions made.

Once you optimize for an action, however, the relevance score suddenly becomes important. If you want conversions, Facebook is going to take a very close look at all positive and negative actions — but particularly the conversions — when determining how often to show your ad and at what cost.

End of the day, an ad’s relevance score can be very helpful. However, it is still not the primary metric to measure success. Ultimately, your desired action or objective remains that primary metric.

Relevance scores are rolling out globally and can be viewed across all Facebook ads reporting and through the ads API. If you don’t see it yet, try and be patient. As always, you are at Facebook’s mercy!

For more on relevance scores, including where they are found and how you can use them, make sure to check out my recent exclusive post for Power Hitters Club members.

Not part of the Power Hitters Club yet? Go here to get started!

Have you started seeing relevance scores yet? What do you think?