You have a new product that you want to promote. You create a Facebook ad campaignThe campaign is the foundation of your Facebook ad. This is where you'll set an advertising objective, which defines what you want your ad to achieve.. Should you optimize for conversions or clicks? Now, you have another option with a new Facebook conversion optimizationHow you optimize impacts who sees your Facebook ad. Facebook will show your ad to people most likely to perform your desired action. feature: BOTH.

One of the many benefits of Facebook advertising is the ability to optimize for a particular action. Facebook has data. They have lots and lots of data. As a result, they have a really good idea about which groups of people are more likely than others to click, convert, or engage.

When creating a campaign with the conversion objectiveThe campaign objective is the ultimate goal for your Facebook ad. Your selection will impact options, including optimization and delivery., advertisers need to select an optimization action…

You can optimize for any of the following:

The power of Facebook advertising is found within the first two options. Facebook knows who (within the audience you’ve selected) is most likely to convert or click a link. You don’t need to waste money on those least likely to perform those actions.

When you optimize for an action, Facebook won’t show your ad to everyone within your audience. Instead, they’ll focus only on those most likely to perform the action that you want.

If I’m selling my Business Manager training program, I’d logically want to optimize for that.

Facebook knows what types of people have bought my course before because I have the Facebook pixel on my website and created a Custom Conversion for that product. So Facebook can learn about what those people are like so that they can find more people in my audience who are just like them and likely to buy.

But here’s the problem: What if my product is new? What if only a couple of people have bought it so far? Facebook won’t have enough data to properly optimize.

Facebook says that in order for its systems to properly optimize, you need to receive a minimum of 15-25 of those conversions per week. Obviously, the more high-quality data that Facebook can work with, the better. But that’s the minimum.

What, then, do you do if you aren’t getting that many conversions?

Or you could optimize for link clicks to drive more people to the landing page in an effort to get more conversions.

That method is a bit messy, of course. It’s manual. You need to make assumptions. How long should you optimize for link clicks prior to switching to conversions? How many conversions is enough to properly optimize for conversions?

Thankfully, Facebook is rolling out a new method that will automatically switch from optimizing for link clicks to conversions!

If you have this new method, the optimization area will look like this…

That could be pretty dang helpful.

If you click the toggle to turn this feature on, you’ll get a drop-down… 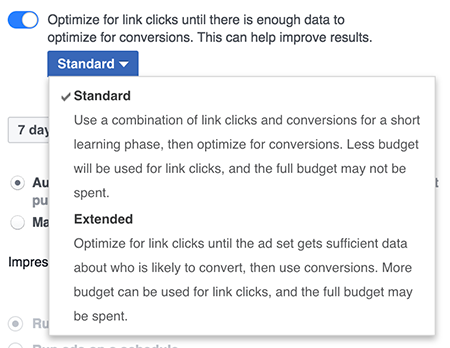 This is the default (or “standard,” I guess) option.

Facebook will start by optimizing for link clicks until your campaign achieves one of the following three things:

Once that happens, optimization will switch automatically to conversions.

Note that Facebook doesn’t care if your campaign is running for less than a week. They also don’t care if you’ve already used up your budgetA budget is an amount you're willing to spend on your Facebook campaigns or ad sets on a daily or lifetime basis.. Theoretically, you may never switch to optimizing for conversions if you never hit one of those thresholds.

While you may get more conversions early with this method than with Standard, you’re also at risk of driving lots of traffic without any conversions since Facebook will have a difficult time optimizing for those conversions.

Which Should You Use?

First, know that this method isn’t magical. It doesn’t replace the normal way of optimizing for conversions if you already have enough conversions to properly optimize. If that method is working, don’t expect this to improve your results.

But if volume is an issue and you aren’t getting good results, you absolutely should give this a try. A couple of thoughts to keep in mind…

Standard is the default option because that’s where Facebook thinks most advertisers will find success. If you want to generate more volume to eventually optimize for conversions, use this method.

If your focus is instead on making sure you spend your entire budget or get full delivery, Facebook suggests Extended optimization.

Not sure what’s right for you? Facebook says to start with Standard optimization and switch to Extended if you don’t get enough delivery.

Have you started to experiment with these optimization options yet? What results are you seeing?