If your Facebook ad ads are struggling due to audience fragmentation, there’s a way to manage them with automated rules.

Let’s say that you have multiple ad setsAn ad set is a Facebook ads grouping where settings like targeting, scheduling, optimization, and placement are determined. More running at the same time that are targeting different audiences. These could be ad sets within the same or different campaignsThe campaign is the foundation of your Facebook ad. This is where you'll set an advertising objective, which defines what you want your ad to achieve. More.

Each ad set promotes similar ad creative with a similar setup. For example, each uses the Conversions objectiveThe campaign objective is the ultimate goal for your Facebook ad. Your selection will impact options, including optimization and delivery. More and with ad images that utilize a similar image and copy.

The belief is that it will help optimize performance faster, allowing you to spend the budgets more efficiently.

Luckily, you can manage audience fragmentation with automated rules.

Automated rules allow you to set up automated processes to make changes to your advertising based on certain benchmarks. You can create a new automated rule in Ads Manager by clicking the Rules dropdown. 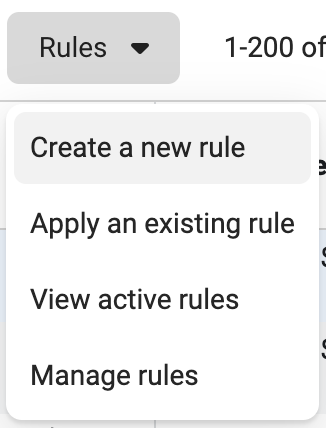 Within automated rules, there’s a template to “Reduce Audience Fragmentation.”

Here’s how it works…

When you turn this automated rule on, it will apply to all of the ad sets in your account. It is triggered if Facebook detects audience fragmentation between ad sets. The ad creative and setup would need to be similar, with different audiences and ad sets. 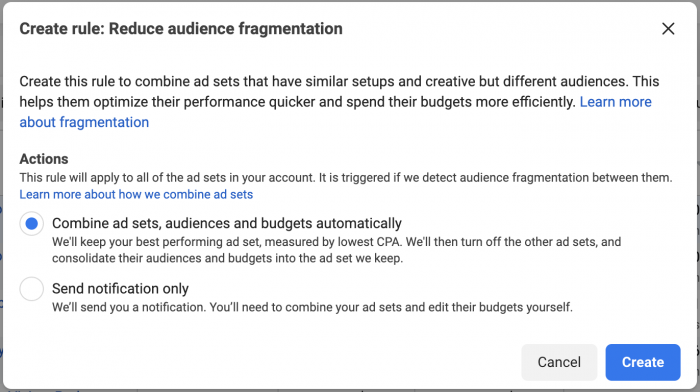 When you do this, Facebook will keep your best-performing ad set (measured by lowest Cost Per Action). The other ad sets will be turned off, but the audiences and budgets will be combined into the surviving ad set.

In this case, you’ll simply be notified that Facebook thinks audience fragmentation is an issue, and you’ll receive recommendations to combine ad sets. It will be up to you whether you combine these ad sets or not.

Personally, I tend to prefer the notification option, but feel free to test this out. Maybe you’ll see over time that combining ad sets automatically keeps your performance more efficient.

Find what works best for you!

Have you used the automated rules template to manage audience fragmentation? Has it improved your results?