Facebook announced today the launch of improved friend lists, helping make sharing to relevant groups easier. Presumably, since I don’t yet have the update. 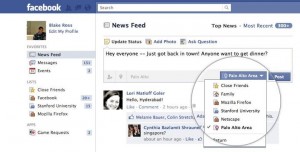 A screenshot from Facebook showing their improved friends lists in action. Click the image for a close-up view.

We’ll see how much this increases the use of lists, but this sounds like a good — and overdue — first step.

One of the things that baffles me about Facebook is the uproar over privacy. Yet, merely 5% of Facebook’s users utilize Lists, a feature I use routinely to target specific groups of people with my updates and keep things private that I want private.

When Google+ launched, early adopters raved about Circles, saying how great it was that they’d now be able to put friends into these cool groups and target content accordingly. What a novel idea!

While the Google+ feature is nothing new, there are two things to keep in mind: 1) it is a better interface for grouping friends, and 2) it’s easier to group friends when you are doing it from the start. Getting someone to create lists now on Facebook when they have 500+ friends is understandably difficult.

But the main point here is that what Google+ did wasn’t so much new as improved. And my skepticism about the platform from the start has been that, while it may be cleaner and have a better interface, as a Facebook clone it’s nothing more than a testing ground for Facebook.

We saw this when Facebook recently made updates, tagging, and changing the audience much more streamlined. And now we’re seeing it in their updating of friends lists.

Will Facebook’s improvements be good enough to keep users from leaving the social network for Google+? We’ll see. But so far, it’s clear that Facebook is doing the right thing. They aren’t only listening to their own users, they are listening to Google’s.

Do you have the update yet? What do you think? Will it impact your usage of Lists?