During the past few days, Facebook has made some dramatic changes to their platform. Those changes have garnered the expected response: A mixture of confusion, frustration and anger (and those who actually think it’s pretty cool). 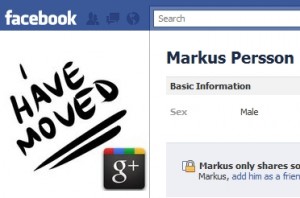 Thinking about moving from Facebook to Google+? There are some things to consdier.

Every time this happens, users threaten to leave. This time, they actually have an alternative.

While I use both platforms (you can connect with me here, though I’m admittedly boring there) and others do as well, this is not the norm. They are similar products in utility, so for the vast majority of the population we’re looking at using one or the other, not both.

So are you fed up and ready to leave Facebook? Maybe it’s time you go. Depending on how you want to use the services, Google+ may absolutely be better for you. On the other hand, you may realize it’s best to stay put.

So here is a quick checklist of things to consider before you make the switch:

Do you care about your history?

This is a big one. If you’ve been on Facebook for a few years, you’ve likely accumulated mounds of photos and other memories. Facebook is going to start highlighting that with the new user profile (now a Timeline). If you are an extremely private person, don’t care about all that sentimental stuff, or just don’t have much you’re leaving behind, making a switch wouldn’t be a big deal for you.

This is also a consideration for those of you who may be sentimental, but are simply creeped out by having all of your stuff available on Facebook.

Do you want to start your network over?

I thought of various ways of wording this. Many of us have hundreds of friends on Facebook. Much of people’s complaints about privacy could be mitigated if they simply had a smaller network of friends. So starting over with a small group may be a good idea.

Starting over is also a good way to make sure your privacy settings are appropriate. While Google Circles really aren’t much different than Facebook Lists, you have to go through hundreds of people to apply your lists today if you hadn’t yet. If you start over with Google+, it seems much easier because you use it every time you add a new connection.

Just know that, at least at the moment, most of your friends aren’t on Google+. So if you move over, you’ll need to put in some work to create a new network of connectionsWithin your ad set, you can further narrow targeting by adding a connection to a page, app, or event that you control.. Depending on whether your friends are generally tech savvy or not, it may be a completely different group of friends on Google+.

Are you more interested in sharing and getting information than sharing lives?

This is important. Facebook really is about family, close friends and sharing our lives together. Facebook is pushing us even harder in this direction with the launch of the Ticker, smart lists for Close Friends and Family, and the new Timeline that tells your life story.

Maybe you have no need for the endless stream of baby updates, pregnant bellies, and drunk photos (hopefully not from the same people). If you are more interested in sharing information on a particular subject, professional networking, or simply being more private about what you share, Google+ may be for you.

Do you want less complexity?

Google+ is definitely simpler, both in user interface and in privacy settings. There is no Ticker. Just one feed. And while Facebook is making your Timeline (profile) a destination, it’s an afterthought on Google+.

It also makes privacy simpler. A major complaint on Facebook is that users don’t always understand what’s public and what’s not. While that’s been vastly improved of late, not having a Wall on Google+ removes a layer that causes much of the confusion. People often forget that when you comment on someone else’s wall, you’re at the mercy of their privacy settings.

That said, it’s not as if this is a non-issue on Google+. When you comment on someone’s posts there, you are subject to their privacy settings. If you make a comment on someone else’s public posts, Google’s search engines will gladly make it available to the world. In either place, you need to be smart.

But remember… It’s all subject to change

The grass may seem greener on Google+ right now. And in some cases, it may be the right place for you.

But Google+ is intriguing right now partly because it’s new. Yeah, it’s shiny and cool. But it’s also small, exclusive, clean and uncluttered. It hasn’t been stomped on by the unruly neighbors.

If there does end up being a mass exodus from Facebook, suddenly you’re going to be seeing a lot of the same things you didn’t like about Facebook on Google+. Baby updates, pregnant bellies, drunk photos (hopefully from different people).

Also, since Google+ is so new, it’s not clear how they’ll enhance the service. You yearn for Facebook of 2008. See how much the service has changed? Expect Google+ to change dramatically over the coming years as well.

I’m really not trying to keep you from leaving. I just want to make sure you think it through. The last thing I want is to not be able to read your complaining the next time Facebook makes a change. It’s good, clean entertainment.

And, really, if your life is filled with stress and disappointments because of Facebook’s refusal to never change, trying out another option can’t hurt.

If you’re ready to leave your Facebook history behind, if you’re ready to start your network of friends over from scratch, if you’re more interested in information sharing than the sharing of lives, and if you’d prefer less complexity, then I’d absolutely suggest you consider the move.

I like Google+. Hangouts, the way photos are presented and mobile are done well there. It’s not for everyone, but it might be for you.