If you want to know how many conversions were driven by an ad, Facebook is very good about helping you uncover that information. They are eager to show how responsible the ad was for your impact.

Strangely, it’s a different story when it comes to organic distribution — whether it be of a purely organic post of an otherwise paid ad. This is a huge missed opportunity.

Today we’ll talk more about conversions from organic distribution, the ways you can track it, and how it ultimately impacts our actions as marketers.

A little-known secret: Ads Manager isn’t giving you all of the data.

If your ad is particularly effective, there will be a viral component. Those you target will comment, like, and share your ad. As a result, their friends and followers will have the opportunity to see your ad, too, even though you didn’t pay to reach them.

And if you didn’t pay to reach this new viral audience, guess what? Ads Manager doesn’t report on it. It only reports on paid distribution.

The problem is that most brands and advertisers completely forget about this. When we measure the effectiveness of an ad, we only look at Ads Manager. But there is the potential for a completely different story that is left untold.

If the ad lacks virality, the difference in this impact will be minimal. But for other cases, you may be grossly underestimating the impact of your ads.

The result: We think an ad isn’t performing well, so we turn it off. Meanwhile, it was driving more conversions than we knew.

Here is the really weird thing: Facebook does everything it can to show that your ads were effective (related to your paid distribution). Some would argue that Facebook’s attribution model (7 days after a click, 1 day after a view) takes too much credit for conversions at times.

And yet, Facebook makes no attempt whatsoever to show the conversions you generate with an organic post.

Here’s an example of the metrics that Facebook provides for a post I published that was never promoted as an ad. It only has organic distribution… 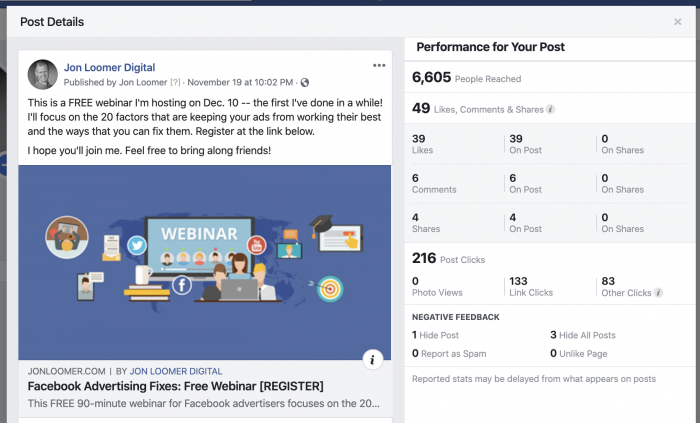 This is not, on the surface, a particularly impactful post. It only reached about 3.5% of my potential audience. It didn’t get much engagement. Facebook only reported on 133 link clicksThe link click metric measures all clicks on links that drive users to properties on and off of Facebook. More.

But, guess what? This pedestrian post drove more than 100 leads, according to Google Analytics… 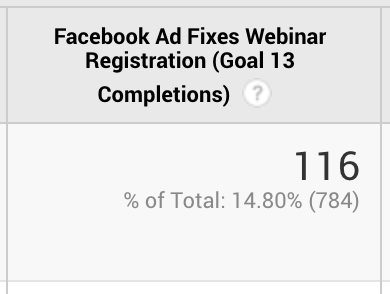 The numbers Facebook provided made me feel like the post was a waste of time. And yet, it generated 116 completely free leads. Particularly during these high competition times, I could easily spend more than $200 for those results.

If you’re wondering how I determined that post generated 116 leads, it’s because I used UTM parameters. In other words, I altered the end of my URL so that Google Analytics could track my traffic and report on those who arrived on my website from that specific link.

You can create your own with the Google URL Builder (or freehand if you’re a pro).

When you use that new URL, find out the results within the “Campaigns” section of Google Analytics.

4. Conversion AttributionAn attribution window is the number of days between when a person viewed or clicked your Facebook ad and subsequently took an action. More Consistency

Of course, you shouldn’t have to go through all of this to track the number of conversions coming from your organic post. Facebook should display it.

And one reason Facebook should display it is that this method is imperfect for one primary reason: attribution consistency.

Google can’t do this. They have no idea if you saw an ad without clicking and later acted on it. We know that Facebook and Google Analytics will never match up. It’s not because one is trying to mislead you. They simply have access to different information.

As a result, the use of UTM parameters is merely a Band-Aid for uncovering the full picture when Facebook could easily provide this information.

Some of you may be ready to shout at me about the Facebook Attribution Tool. Yes, this tool can help you uncover how many conversions you get from both paid and organic efforts on Facebook.

But there are two primary issues with this that don’t solve our problem.

First, it displays both paid and organic conversions coming from Facebook, but it doesn’t separate those that weren’t the result of a post you shared. But this is a smaller issue.

This is incredibly frustrating since we know that Facebook has this information. They’re just choosing not to show it.

6. The Disappearance of Organic Distribution Metrics

While doing the research for this post, there’s also been a change that impacts our ability to even see the basic organic distribution metrics associated with our ad.

When viewing a post published to my page from Facebook’s Pages mobile app, I’m able to see the difference in organic and paid distribution of that post (assuming I promoted it).

But what about the organic distribution of a post that only exists as an ad?

There was a time when you could go to the permalink of your ad, and Facebook would display organic and paid distribution — just as displayed above with a page post. This helped understand the viral impact of the ad, even if it didn’t help uncover organic conversion information.

As far as I can tell, this is no longer the case…

Another place that previously helped display total reach, organic and paid, of an ad was the Page Posts section within Ads Manager. Well, whether it’s a bug or intentional, it now displays all zeros for me… 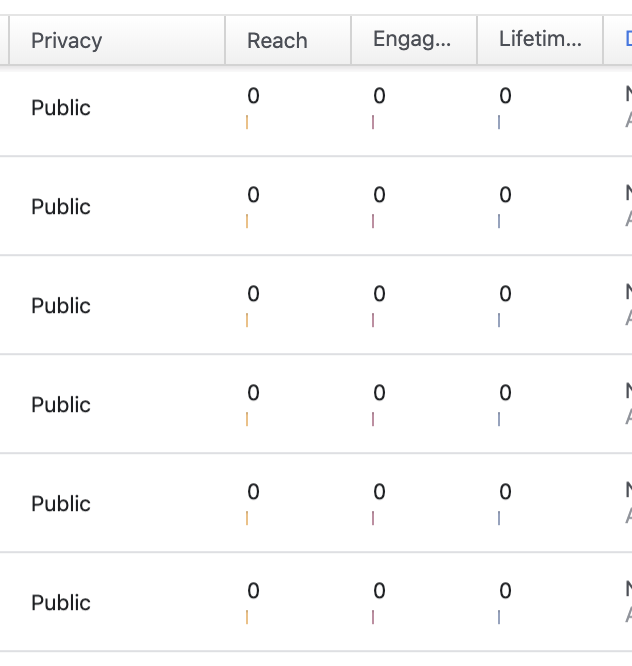 For whatever reason, Facebook now makes it insanely difficult to uncover any organic distribution information related to an ad.

So, let’s try to look at this from Facebook’s perspective. Why don’t they display this information?

The first explanation would be that it’s not possible. But that would seem unlikely, particularly for those page admins who are already using the Facebook pixel. What’s so different about a paid post and organic post that allows Facebook to report on paid, but not organic, conversions? The organic post itself has every other metric.

And since Facebook provides the general organic conversion numbers within the Facebook Attribution Tool, I’m even more inclined to believe it’s possible.

I’m left to assume this is a business decision on the part of Facebook. What is the danger of displaying this information? Let’s think about it…

Facebook’s been criticized for putting such a focus on organic reach. Well, actually, I’d say that highlighting organic reach has resulted in complaints about not reaching more people. And the implied goal of highlighting that metric is to get people to spend money to reach more.

But, what if reach isn’t all that important after all? What if you’re getting a bunch of conversions from that organic post? A post that you otherwise presumed hadn’t been that effective?

In my case, I could have spent more than $200 to get the same impact of a poorly performing, strictly organic, post. That certainly made me think about my distribution of paid and organic efforts.

This all seems like a colossal missed opportunity. It really shouldn’t be that hard. Create a prompt that encourages the page admin to connect their pixel, if they haven’t already. Then report on organic conversions that happen as a result.

I don’t know if this would change behavior, leading marketers to spend more or less on ads. But I do know that it would provide a much clearer picture regarding the impact they are making.

Was this ad effective? Well, these are the numbers based on those I paid to reach, but…

Was this organic post effective? Well, these are the numbers based on how many people it reached and other basic metrics, but…

This is especially important for those running ads for others. It’s possible that these advertisers are currently missing a portion of their impact. A full picture may keep clients happy.

Show us the conversions, Facebook. Paid and organic. There’s really no excuse.

I also talked about this on the video below…

What are your thoughts on organic conversions?