Advertisers make the mistake of minimizing — if not forgetting entirely — the impact of the organic distribution of their ads. Today, let’s take a closer look at this as it relates to Facebook lead ads.

When you create a Facebook lead ad form, you may be unintentionally limiting your distribution. In some cases, this may be fine — even preferred. In most cases, though, advertisers may be surprised that this is happening.

When creating your form, toggle over to the (often ignored) “Settings” tab.

As you can see in the screengrab above, Facebook limits the audience of your lead ad form to “restricted” by default. If you don’t target someone, they won’t see it and can’t complete it.

The natural impulse may be, “Well, duh,” but you’re missing an important group. What if someone you targeted shares your ad? Do you want to allow others to complete the form?

In some cases, the answer might actually be “no.” You may want to provide something to a very select group.

But in most cases, you probably want to keep it open to anyone, even if they weren’t targeted. I almost always switch this to “open.”

One of the inherent weaknesses of Ads Manager is that it ONLY reports on actions and impressions that are the result of paid distribution. Here’s an example of that in action…

Ads Manager reports that a lead ad campaignThe campaign is the foundation of your Facebook ad. This is where you'll set an advertising objective, which defines what you want your ad to achieve. resulted in 94 leads. 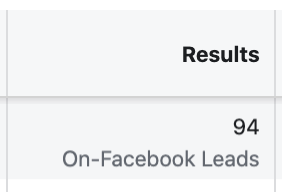 Keep in mind that this is the only campaign, active or inactive, using this particular form.

More than likely, you aren’t going to question these results. You’ll assume that you generated 94 leads with this campaign.

Luckily, this is something that can be easily proven (or disproven).

From your page’s publishing tools, select the forms library under Lead Ads Forms. 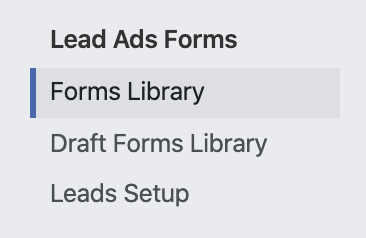 Hover over the “Leads Count” column for the form in question.

As you can see in the example above, there were 98 actual leads generated with this form. Of that 98, 95 were targeted and 3 were untargeted.

In all, there are 4 total leads being reported here that weren’t reported in Ads Manager (I’ll get to the discrepancy in a moment). While that’s not a huge number, this also wasn’t a particularly viral campaign. Imagine what can happen if a campaign gets an engagement push and a high number of targeted people share or tag friends.

So, you’ll recall that Ads Manager reported 94 leads while Publishing Tools reported 98 (95 targeted and 3 untargeted). We would assume that the targeted number should be 94, not 95. Assuming no delays in reporting, what’s the deal?

I have a couple of theories, but one that I think is most likely. We need an explanation for why a lead would be reported as targeted, but also not paid (and not appearing in Ads Manager).

The targeted user didn’t act on the ad, but later acted when it was shown organically.

Recall that Ads Manager only reports on paid distribution and actions. It’s possible that a person can be targeted, but not act on the ad, then act on it when someone else shares it. As a result, that lead would not appear within Ads Manager, but may still appear within Publishing Tools as “targeted.”

There would be additional explanations had this been a website conversion that required certain attributionAn attribution window is the number of days between when a person viewed or clicked your Facebook ad and subsequently took an action. windows to be reported. But that doesn’t apply to “on ad” leads.

The Power of Organic Distribution of Ads

This actually takes us to a whole separate conversation that I’ll reserve for another day. But let’s scrape the top of it.

Facebook is missing a golden opportunity. Ads Manager completely ignores organic distribution and actions. Even within your post Insights, you will see organic vs. paid distribution, but Facebook never displays the organic conversions.

It’s actually a question I’ve posed to Facebook. You’d think that Facebook would want us to know this info. It gives us a broader — and more accurate — view of the impact that our advertising is making.

If you’re lucky enough to have a paid campaign go viral, Ads Manager is going to report on only the paid portion of results. This really matters.

Right now, Facebook reports on the general impact you’re making with conversions across paid and organic efforts within the Facebook Attribution tool. But it’s not connected to a specific campaign or ad.

While you could use workarounds with UTM parameters and third-party tools, understand that Facebook reports conversions based on a standard attribution window: Within 1 day of viewing (and not clicking) or within 7 days of clicking an ad (or in this case, a post). Only Facebook can report that accurately (particularly view-through conversions).

Again, it’s a huge missed opportunity. And it’s something you shouldn’t forget about when determining the impact of your advertising, particularly if you know you’re getting a viral boost.

The nice thing about Facebook lead ads and their results is that there isn’t ambiguity about the number of leads that are produced. We don’t use attribution windows. Either someone completes the form or they don’t. That makes this exercise of separating paid and organic leads very easy.

It’s not nearly as simple with conversions. We’re going to talk about that soon.

In the meantime, have you monitored the organic impact of your ads? In particular, do you have examples when there is a huge, separate story that’s left untold by Ads Manager due to organic distribution?