You may have heard about it. Advantage+ (or Advantage Plus?) conversion campaign creation has been rolled out to some advertisers during the past several months, but not everyone has it.

What is Advantage Plus?

If you have Advantage Plus, you’ll know it when you create a Purchases campaign in ODAX or a conversions campaign during the old objective selection method. You’ll immediately see a prompt for the “Creation Method.” 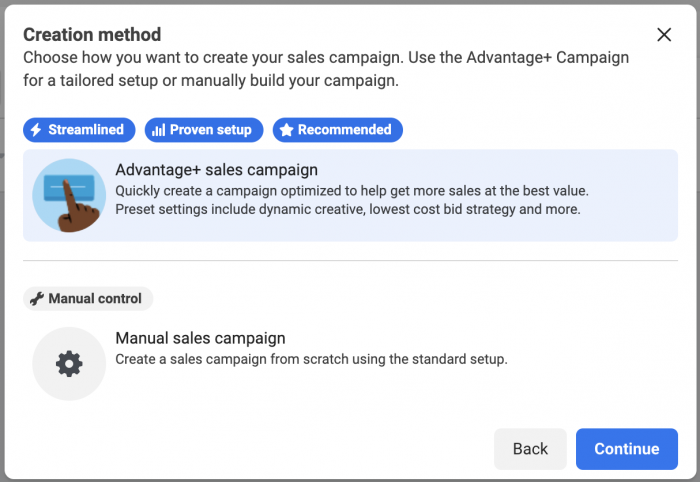 You’ll have the option of using the Advantage Plus campaign creation method for a “tailored setup” or the usual manual sales campaign.

And finally, it’s “recommended,” which basically repeats the stuff we’ve already said and benefits in threes are better than benefits in twos.

The biggest difference you’ll notice is that the ad setAn ad set is a Facebook ads grouping where settings like targeting, scheduling, optimization, and placement are determined. More and ad creation processes are now on a single screen.

Those preset settings are:

You’ll still be able to customize the following in the ad set:

Advantage Plus attempts to simplify audience targeting as well. It looks a bit more streamlined, though it’s essentially the same process as before. 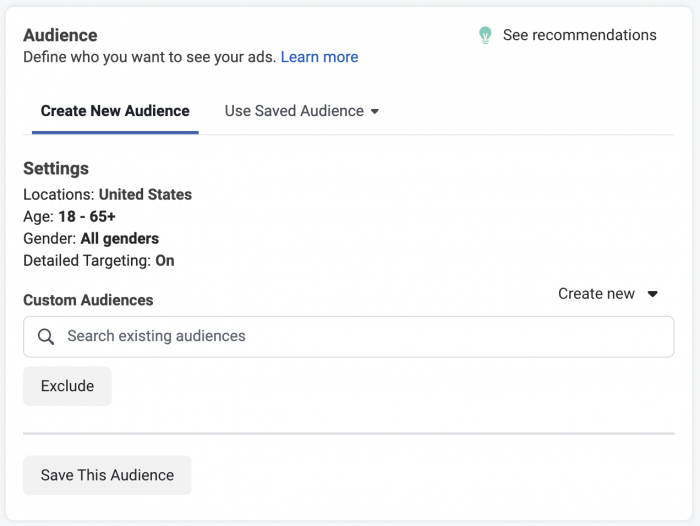 You can select a custom audience or lookalike. You can edit the locations, age, gender, and detailed targeting if you want. You can use Saved Audiences. It’s just not as inviting to do those things.

The ad setup is mostly the same as before. Again, keep in mind that Dynamic Creative is automatically on.

I’d love to say that this is some super powerful way to create campaignsThe campaign is the foundation of your Facebook ad. This is where you'll set an advertising objective, which defines what you want your ad to achieve. More. Unfortunately, I see nothing magical about it.

This is Facebook’s (Meta’s) attempt to simplify campaign creation in Ads Manager for less advanced advertisers. There aren’t any new features here. No new functionality. It’s the opposite, actually.

Advantage Plus is essentially rolling with the defaults (other than Dynamic Creative). It’s Facebook preventing you from editing these things because they believe you’ll get better results by leaving those defaults alone.

This is quite similar to the Boost button. The Boost is Facebook’s attempt to make the creation of a single campaign, ad set, and ad as simple as possible. You could do the exact same thing within Ads Manager. But the Boost has fewer ways to customize.

Advantage Plus is very similar. Ads Manager can be overwhelming. To make the campaign creation process more inviting to a less experienced advertiser, Facebook simply hides the defaults so that you can’t change them.

That’s it. There’s really nothing else to it.

To be clear, I don’t have this yet, so I can’t say definitively whether this is a big deal or not. But, there is no evidence that Advantage Plus is anything more than preventing advertisers from changing defaults.

Advantage Plus is Facebook trying to protect newbie advertisers from themselves. I’d love to be proven wrong, but this just feels like another boost button with no true “advantage” for experienced advertisers.

Have you experimented with Advantage Plus yet? What do you think?