I hear a lot of chatter about how time-consuming creating Facebook ads within Ads Manager can be. The truth is, though, that most people with this issue don’t have the right processes in place for optimal efficiency.

When I create a new campaign, the vast majority of my time is spent on the ad itself (imagery and creative). The creation of campaignsThe campaign is the foundation of your Facebook ad. This is where you'll set an advertising objective, which defines what you want your ad to achieve. and ad setsAn ad set is a Facebook ads grouping where settings like targeting, scheduling, optimization, and placement are determined. is lightning fast, and a big reason for that is saved audiencesA saved audience allows a Facebook advertiser to save often-used targeting settings to easily use later..

What a Saved Audience Is

The typical advertiser takes one of two approaches when creating an ad set that targets an audience they’ve targeted before:

The second option can save time, but there is the matter of finding that ad set and changing the settings that don’t apply to the new ad set.

The first is the most common. The advertiser essentially wings it, creating the audience based on…

There are a couple of obvious issues with this approach.

First, it’s absolutely time-consuming. You may need to enter several custom audiences. Or several countries. And as almost always is the case with interests, several of them. The advertiser either enters them from memory or goes back and forth between an existing ad set and the new one.

More importantly, though, is that it’s inexact. When advertisers wing it, they enter all of these things from memory. Is the ideal age group 35-44 or 25-49? Did the list of interests include “Facebook for Business” or “Facebook for Local Business”?

These seem like small variations, but they make a huge difference.

With saved audiences, you can take an audience you use frequently — and successfully — and save it for easy access later.

Create a Saved Audience From Scratch

To create a Saved Audience from scratch, go to the “Audiences” section of Ads Manager… 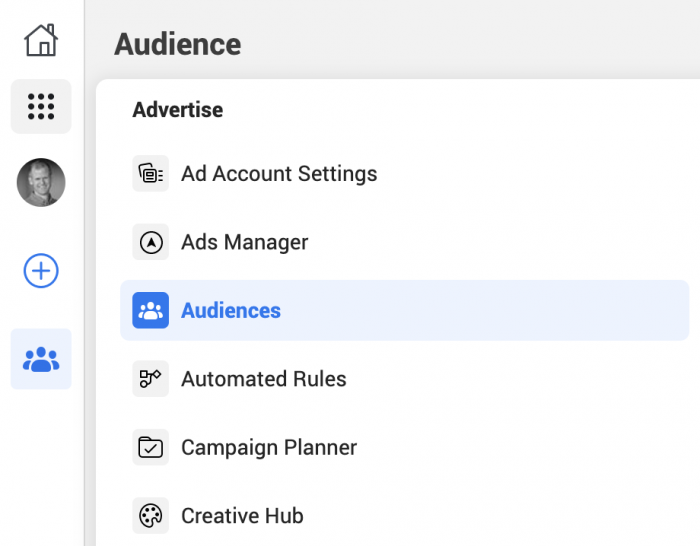 Click the “Create Audience” button at the far right and select “Saved Audience.” 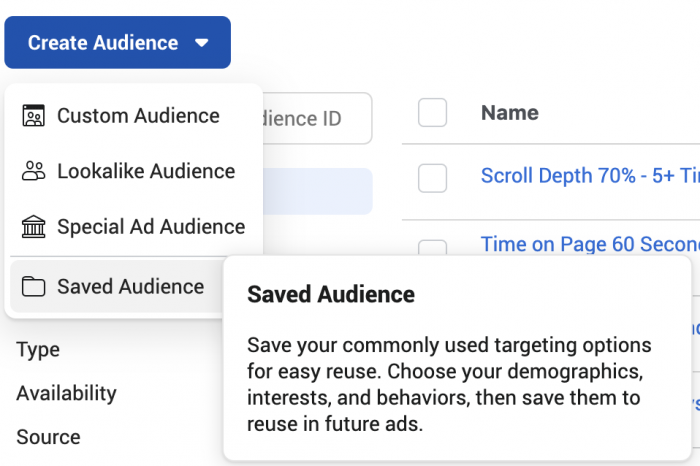 Now create the audience as you normally would within the ad set. Select custom audiences, countries, ages, genders, interests, connections, or whatever you want. Then name and save it. 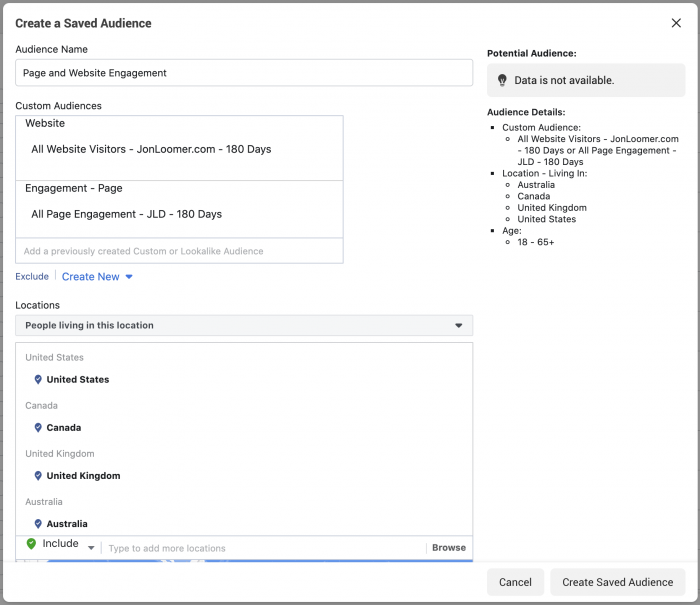 Create a Saved Audience From an Existing Ad Set

There are a couple of ways you could create a Saved Audience from an existing ad set.

The first is to find an ad set that uses a frequently used audience. Select it and then click the icon to save your audience.

The second is within the creation of your audience within the ad set. At the bottom is a button to save the audience. When checked, you’ll need to name it. 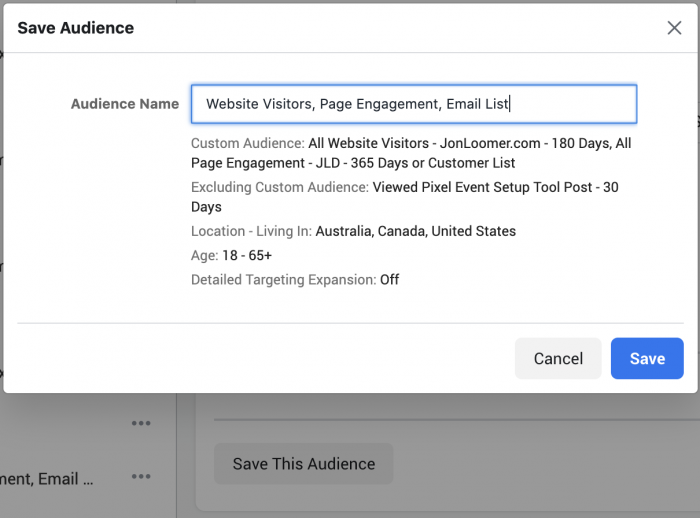 That new saved audience will now be found within your “Audiences” list.

Use a Saved Audience

When creating your ad set, by default you are generating a new audience. But, click “Use Saved Audience” to get a list of saved audiences. 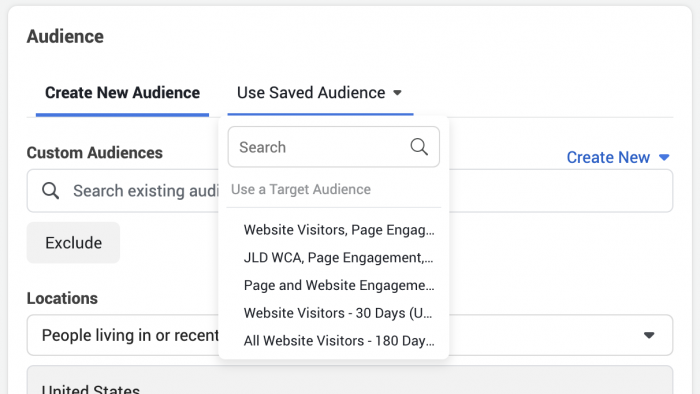 After selecting a saved audience, it will fill out the audience settings for you. 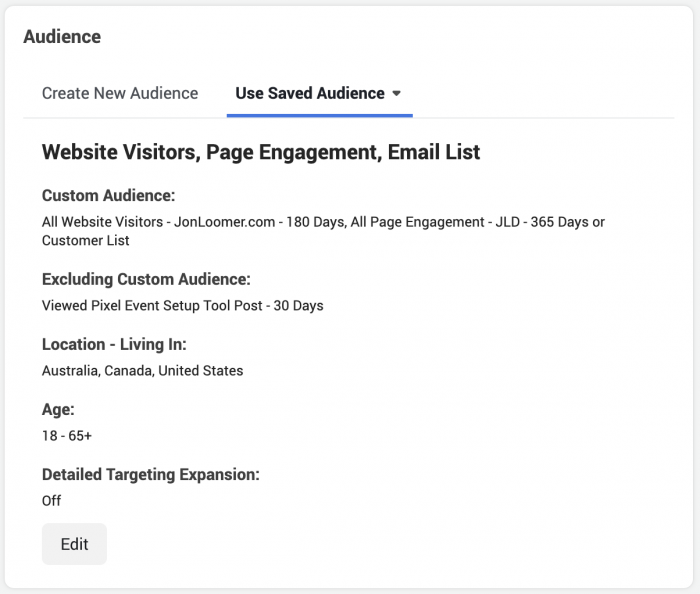 Just know that once you select that, any edits will be made to the saved audience itself. So if you click the “Edit Audience” button and change the ages or countries, for example, those changes are applied to the Saved Audience. This same audience may be used for other ad sets as well, and those changes would also appear there.

This part is extremely annoying. It’s always been this way, and it seems like an obvious area for improvement. Why not make saved audiences more of a template that can be edited? For example, you’ll often want to exclude the audience that performed the action you’re promoting.

As a result, this may be best suited for targeting where exclusion isn’t needed — maybe where an action can be performed repeatedly.

Saved Audiences You Should Create

You should look at this tool as a way to save yourself a ton of time. Find the audiences you target most frequently and create saved audiences out of them.

Here are a few examples…

Honestly, it could be anything. No judging.

Do you use saved audiences? Which audiences do you save?