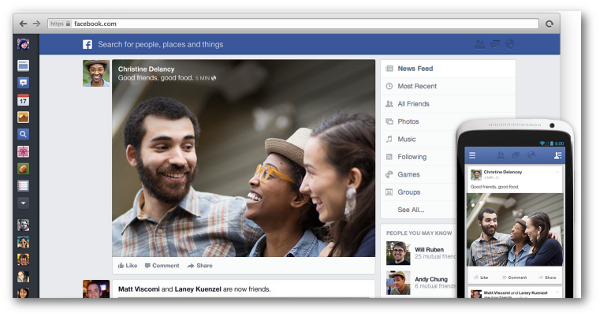 For the past several months, we’ve been hearing marketers from across the globe gripe about the number of Facebook Fans they reach. Mark Cuban led the charge, insisting that Facebook was preventing its users from seeing the brand content that they so desperately wanted to see.

With the latest News Feed design, Facebook is giving users the opportunity to view more of the things they care about most. If Mark Cuban and others are right, that would mean that more of our brand content will be seen.

But Cuban and those who agree with him are wrong. And barring something surprising, many brands will not be happy with the results.

Giving Users More of What They Want (It’s Not You)

The new News Feed includes several options for users to view unfiltered content that they may have missed. The feed that could hurt brands the most: All Friends.

All Friends obviously doesn’t include brand content. And it is likely to be the most popular feed option after the default News Feed.

It’s impossible to say just how much these alternative feeds will be used. But the more users are on feeds that don’t include brand content, the fewer the opportunities to reach them.

Any increase in concentration of activity on friend content is unlikely to be good for brands. It’s difficult to come up with a scenario where the watering down of the News Feed will result in brands reaching more users (though I’ll consider one later).

Following Feed Will Be Ignored

And now here’s the biggest problem, and Facebook should make sure to email these results to Cuban and others.

Now that we have the Following feed, we’ll find out whether this is true. And I think we all know where this is heading.

One of the cool features of the new feed system is that the order of the feeds will be sorted by those used most often. My guess: The Following feed will tumble to the bottom of most users’ lists.

So, could the Following feed result in reaching more Fans? Sure, if you believe the refrain that users care whether they are seeing 100% of brand content.

But I’m guessing that — at least in the early version of the new News Feed — brands will be reaching fewer people than they were before.

The argument was flawed from the start.

Once we learned that “only” 16% (or sometimes less) of our Fans were seeing a specific post, many made the false correlation that Facebook was directly responsible by intentionally preventing the other 84-90% from seeing it.

This was never true.

The truth is that only about half of our Fans are on Facebook every day. And even those who are will only be on for a period of 30-60 minutes. Content — even filtered content — gets buried in a hurry on Facebook. If you miss a two hour window when a user is online, they probably won’t see your content.

So somewhere between 10-16% of our Fans saw our content? The target open rate for email — a stationary target — is 20%. And you expected that (or more) on Facebook?

No one ever talks about percentage of followers reached on Twitter. But I’d be willing to bet money the percentage is under 5% for a single post. Maybe under 1%.

We always had unrealistic expectations on Facebook. I never understood why. And my guess is that we’re about to pine for the days when we reached as many Fans as we once did.

Engagement and Relevance Should Rise

I know this all sounds disastrous. If you think Reach is an important metric, it could be. And even for the rest of us, there is reason to be concerned.

But it’s not all bad. If you adjust and take advantage of the changes to News Feed, you should benefit.

That’s why I preach over and over that you need to look beyond Reach. It’s entirely possible that Reach is about to drop again, but you may actually end up getting more engagement.

I’m looking further into the future here, but I envision Facebook eventually adding more feed options that apply to brands. Think about a Sports feed, for example, that automatically pulls in posts from the sports-themed Pages you like. Facebook could apply to this to a long list of categories since this segmentation has already been done when the Page was created.

If that happens (and I’m betting it will), this will allow brands to reach a more relevant and engaged audience. While I don’t expect users to spend much time on a general “Following” feed, I do think they’d find utility in themed lists for brands.

Effectiveness of Advertising Should Improve

This all leads to advertising. Of course it does.

If the segmentation of feeds results in brands struggling for exposure — or a perceived struggle for exposure — the immediate reaction will be to advertise. Or it will be for some.

I realize the immediate response here is anger. But let’s think this through…

In my opinion, the changes could significantly improve the Facebook user experience. And a better user experience could include seeing less of your content.

So it only makes sense that if you want to reach more people who aren’t otherwise all that passionate about your content, you should have to pay for this access.

But I’m going to go out on a limb here and say that such advertising will be far more effective than it is now.

If you promote a post, the images and videos and thumbnails — as mentioned earlier — will all be much larger and will attract more engagement.

If you run a marketplace ad on the sidebar, the ads will be bigger and will compete with fewer ads than before. 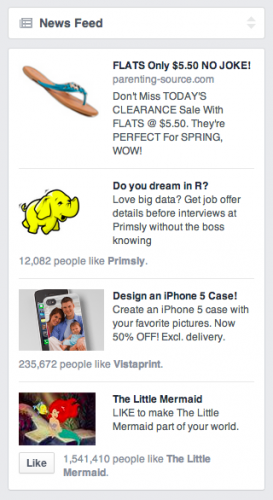 If you run a Page Like Sponsored Story, your cover photo will be pulled in, which would likely yield better results. In fact, the organic version of this story should prove to be more effective than it is now.

But there are other opportunities that may be coming, and they are related to the potential emergence of new feeds as described above.

Let’s use the current Music feed as an example. A music-related brand could theoretically create an ad that reaches non-Fans who follow that feed. Same with the Games feed.

And consider if a Sports feed were created. Or Food. Or Marketing. Or Technology. Or Local Businesses.

You get the point. The relevance of those ads could skyrocket.

Separating the Invested from the Freeloaders

One thing is certain: Those who continue to use the same, tired marketing tactics and who think that marketing on Facebook is meant to be “free” are in for a rude awakening.

I fully expect some level of an exodus of brands as a result. Those who refuse to spend for ads and have unreasonable expectations will be disappointed — probably angry.

But the rest of us who commit even marginal budgets (I spend between $100-200 per month on my Facebook marketing) will benefit from the new News Feed. Particularly those who get more visual.

It Depends on How Users Adjust

There is a scenario here where brands benefit and actually reach more users. Let me explain…

The problem with News Feed in the old form was that it was too easy to exhaust recent posts and get bored. I’m constantly on Facebook, and I’ll refresh and refresh and see nothing new — but want to see something else.

What if users continue to use the default News Feed just as much as before? What if they only switch to the other feeds when they are bored and want something more?

If this is the case, there’s no harm done. In fact, some of those bored users may just wander over to the Following feed to see more of our stuff.

Such a scenario would be huge for Facebook. It would mean an explosion in time on site.

But it all depends on how users adjust. They’ve been known to completely ignore new Facebook features in the past. I doubt they will this time, but it’s possible.

And maybe they’ll actually like the Following feed more than I expect. But we’ll have to wait and see what happens.

How do you think users will adjust to the new News Feed? And how will brands be impacted?