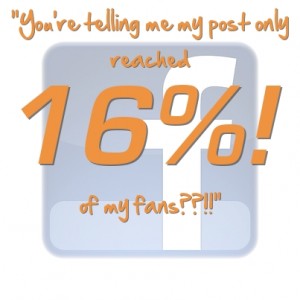 This has been bothering me for a while, and it’s time that this blog post is written…

I keep seeing people freaking out about the fact that their brand’s Facebook Page posts only reach 16% of their fans, “forcing” them to pay for advertising. I continue to read grand proclamations about how EdgeRank is the culprit, and that they should be able to reach everyone.

My biggest struggle with EdgeRank (the formula Facebook uses to surface content that is important to you), is that Facebook is incredibly ambiguous about how it’s used. It makes sense that EdgeRank is the force behind Top News, but I still doubt it’s much of a factor when your News Feed is sorted by Most Recent.

How much exactly is Facebook keeping you from your audience? Is EdgeRank the reason the percentage is 16% instead of 17%? 30%? 50%? No one knows for sure.

I’ve read comments from uninformed users and blog posts from respected writers who are all certain that EdgeRank is the Boogeyman. Yet no one has statistics or studies showing exactly how that’s the case.

Something scientific would be great here, folks. “After a two week study, we concluded that our average Facebook post reached only 160 of our 1,000 fans, and we would have reached 40 more if not for EdgeRank.” You know, facts and evidence and stuff.

I’m fully convinced that we’re focusing on the wrong thing, and some basic math shows this to be the case. People want to point the finger when EdgeRank is not the main reason why you’re reaching only 16% of your fans.

I find it a bit strange that so many marketers are demanding that their posts reach more than 16% of their fans. Why is it that anyone can expect we’d easily reach more?

The typical open rate for a marketing email is 20%. Yet, email is a stationary target. Whether your target audience is on their email right now or not, they’ll get that email. They just may not open it.

On Facebook, your target audience is constantly moving. While users are on Facebook more than any other website, that doesn’t mean that your fans are sitting at their computers waiting for your brand’s latest update.

A recent study indicated that the typical Facebook update has a lifespan of 2 1/2 hours. If your fan isn’t on Facebook within 2 1/2 hours of you posting it, they probably won’t see it.

Another study indicates that the average user is on Facebook 16 hours per month, or about 30 minutes per day. So, what are the odds that your post reaches your target audience during that 2 1/2 hours when they are only on Facebook for 30 minutes per day? Also keep in mind that only half of all users are on Facebook on a given day.

Let’s do the math. An average Facebook user is on for 30 minutes per day. There’s a 2 1/2 hour window from when that person is online that you can reach them (total of three hours). Of a total 24-hour day (especially for international brands), that leaves you with a 12.5% chance of reaching fans through the News Feed on any given day — without considering EdgeRank.

Maybe my math is wrong (statistics nerds — let me know your thoughts), but do you see what I’m getting at? Our biggest obstacle isn’t EdgeRank. It’s that our audience is a moving target. It’s that, unlike email, if our fans aren’t on Facebook during a small window of the day, they probably won’t see our post.

It just seems to me that people have latched onto the concept of EdgeRank without thinking. How many of your Twitter followers do you think see your updates? How about Google+? No one talks about this because there isn’t some big, bad formula to blame.

Some marketers are revolted at the thought of using Promoted Posts or Page Post Ads, but advertising is a very good solution. Facebook knows when your fans are online, you do not. So if User X missed your post, Facebook makes sure that they see it. What’s bad about that?

Of course, you also need to do your due diligence to make sure that you’re reaching as many of your fans as you can organically. Don’t post updates blindly. Use your Facebook Insights and analyze posts made during the past three months that were made in specific 15-minute windows. Which had the highest reach? Which were lowest?

What’s your response to the fact that your updates reach only 16% of your fans? Share below!
433
SHARES
FacebookTwitterBuffer
Linkedin