[The following is a guest post from Emeric Ernoult of AgoraPulse. This is in response to Jon’s post, Facebook Reach Insights Reporting Bug: It Doesn’t Matter.]

Don’t be fooled, I LOVE Jon Loomer. I’ve been following him like a groupie for over a year, and have read most of his articles with the utmost interest.

But Jon is a human being, and he can’t be right 100% of the time. Lately, he’s been wrong about the importance of Facebook reach, and I feel I need to set the record straight about a metric that deserves much more attention than he claims.

Why Reach is Not a “Virtual” Metric

In his highly debated blog post, Jon referred to the reach metric as “an imaginary stat.” It’s not, and here’s why:

Reason #1: Reach has always been a top advertising metric

Facebook did not invent reach, it’s been widely used in the advertising industry for decades. Why? Before the Internet and its army of tracking tools came around, there were very few ways to track the value of advertising from one media avenue to another. Reach was the safest way to place a value on advertisements, and the best metric to inform educated choices as to which media to advertise on.

A radio station could promise you they reached 150,000 listeners. A TV station could boast of 600,000 viewers during their evening news show, while a newspaper could claim distribution to 250,000 readers.

Are these figures of people reached 100% accurate? Definitely not, but even if they are 75% accurate, it’s already good enough to help you decide which one is right for you, if you are trying to reach a certain number of people.

Reason #2: Reach can help you decide on which channel is best to invest your energy and budgets

Let’s say you have a choice to place your ad on two different billboards of the same size, look and feel. The first, on a small road with an average count of 1,000 cars a day, and another situated on a highway with a traffic count above 100,000 cars a day. Which one would you choose?

You’d choose the one on the highway, just because its potential reach is a hundred times higher, regardless that all 100,000 daily drivers may not actually look at the ad.

So, the assumption that reach is worthless because you can’t be sure all the people counted in the metric actually looked at the content is not the right way to look at it. The number of people who will be exposed to a piece of content is an important criteria for marketers. Period.

Reason #3: Reach is probably measured way more accurately on Facebook than on any other media

One of Jon’s greatest criticisms about reach is that “it can’t be proven.”

Well, that’s true. When a radio station tells you it reaches 300,000 listeners for a given talk show, or a TV station says it reaches 1M viewers for its evening news, they don’t have an army of people standing by their said listeners or viewers to make sure they are actually listening to the talk show or watching the evening news. This type of reach is estimated using panels or technological means that are not 100% accurate.

If the advertising industry has been relying on the reach metric for TV, radio and newspaper despite its flaws, it should have no reason not to rely on the Facebook reach metric as the latter is much more accurate.

Worse than describing the reach metric as imaginary, it is also depicted as “close to worthless”. Facebook reach is far from worthless. It’s actually super useful and very important. Here’s why:

Reason #1: Reach is one of the best indicators of your Facebook Marketing strategy’s performance.

The percentage of your fans reached is a great indicator of your Facebook page’s health. Let’s say that you have 1M fans and only reach 1% of them, what does it tell you about your Facebook page strategy? Your content may be good. You may be spending a lot of time and money creating it, but no one is seeing it. 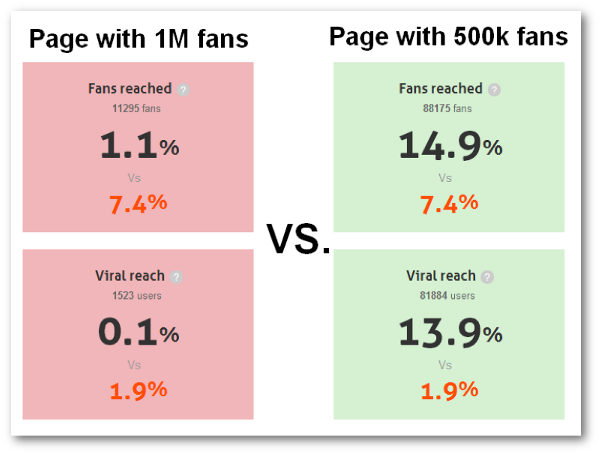 Here are two pages, one with 1M fans and the other with 500k fans. This screenshot from our Facebook Page Performance Barometer shows the average number of fans reached by each post of the page for the last 50 posts. But, even if the second one reaches half the fans of the first one, it still reaches 8 times more people each time it publishes something. Don’t you think you need to be aware of that?

Reason #2: Reach is the only way to accurately measure the engagement of your audience

Too many vendors still provide engagement metrics based on the total number of fans. They take the number of comments, likes and shares, then divide them by the number of fans and multiply it by 100. You end up with a ridiculously low percentage (between 0.1 and 1% for the best pages).

Why on earth would you include fans who did not have a chance to view the content in the formula which measures the percentage of fans who engaged with the content?

The only way to effectively measure the % of engagement on a Facebook page or a Facebook page’s content is to prorate it against the number of people who have seen it. The others should not be taken into account.

Reason #3: Ignoring reach and focusing on engagement only is neglecting the importance of the long term value of brand awareness

I realize that in the era of the almighty ROI, everything we do should produce immediate and measurable results that impact our bottom line. Right now.

Having founded five businesses over the last 13 years, I can tell you one thing for sure: ROI is great and should be measured when it can, but basing all your investment on ROI is the best way to ultimately fail.

Why? Because, even in the online world, where everything seems to be measurable, very few things actually are. Worse, those things that can be accurately measured in terms of ROI, such as Adwords, are rarely generating a positive ROI. How many marketers among you can say they invest $1 on advertising and make $1.5? Or more?

Let’s face it, positive ROI is a scarce thing.

In my case, the strategies that have proven the most rewarding have been long term strategies, such as content and networking with my peers. None of these can actually be measured and none will ever provide a return you can easily link to the efforts and budgetA budget is an amount you're willing to spend on your Facebook campaigns or ad sets on a daily or lifetime basis. you have invested in them.

So, if you remove reach from your value equation and focus on the engagement, you’re making the same mistake — focusing only on the effect your content is having right now, and not the one it will have on all the people who have been exposed to it over time.

Reason #4: Reach is the only way to benchmark your posts’ performance against one another and improve your editorial strategy

How can you compare your posts against one another? The only way to do this effectively is to prorate all your engagement metrics against the individual reach of each post.

To have a real life illustration of that demonstration, check the screenshot below. It comes from one of the pages we manage using our Facebook Page management software and it automatically makes this percentage calculation for us. 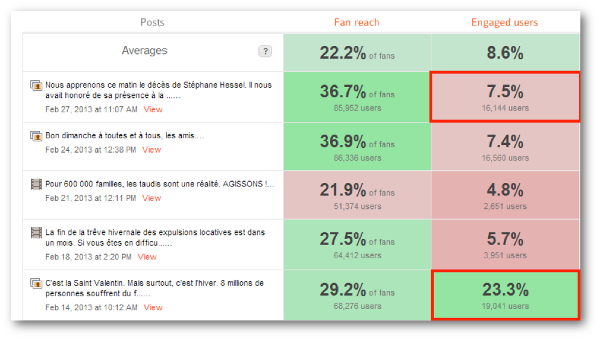 That’s it. I don’t have any more arguments to convince Jon that reach is not such a bad metric after all… I hope he’ll change his mind!

What about you? Do you monitor your reach? Do you use it to get a better understanding of your engagement metrics? Just don’t give a damn? Let me know! 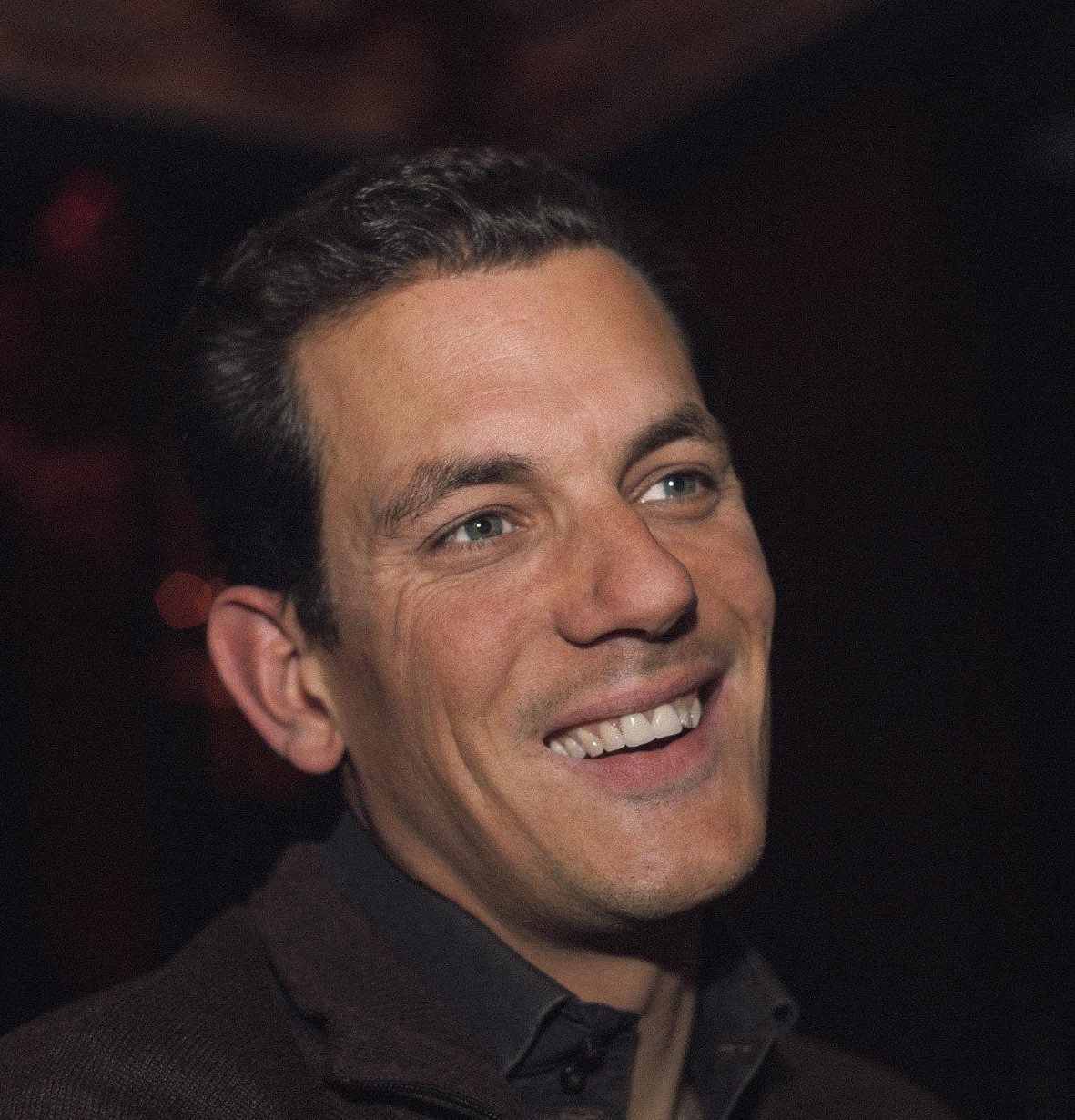 About Emeric Ernoult
Emeric is a serial entrepreneur with a passion for Facebook marketing. He is the founder of AgoraPulse, the first Facebook marketing and CRM software specially designed for small and medium-sized businesses. He has also launched the Facebook Page Performance Barometer, a free tool helping Facebook Page manager to better understand their performance on Facebook.