The Facebook Conversions API has been a popular topic for the past year or so. While most marketers understand that they need it, most misunderstand the reason why.

Let’s clear up the following:

The Conversions API creates a direct connectionWithin your ad set, you can further narrow targeting by adding a connection to a page, app, or event that you control. between your data and Facebook. This helps provide a conversions source in addition to the pixel and offline methods.

Consider the API something of a backup plan for sending web events. Those web events can be used for conversion attribution and reporting, optimization, and targeting.

Why the API is Important

The Facebook pixel was one of the most impactful developments of the past decade for advertisers. It’s certainly been huge for my advertising.

The problem is that the pixel is getting less and less reliable. Its ability to send event data to Facebook is interrupted by cookie blockers, loading errors, and connection problems.

It doesn’t mean that you should use the Conversions API instead of the Facebook pixelThe Facebook pixel helps advertisers track events that occur on their website and reach people who performed those events with ads.. If you use them both, you’re more likely to send Facebook a complete set of data. If Facebook doesn’t have the complete picture, it will negatively impact the platform’s impression of performance.

Consider this: If Facebook doesn’t have all of the event data, it may make it more difficult for your ad setAn ad set is a Facebook ads grouping where settings like targeting, scheduling, optimization, and placement are determined. to exit the learning phase. It may lead Facebook to incorrectly favor one ad set over another or one ad over another. Accurate attributionAn attribution window is the number of days between when a person viewed or clicked your Facebook ad and subsequently took an action. is important.

Adding the API leads to improved reporting, more complete custom audiences, and better optimizationHow you optimize impacts who sees your Facebook ad. Facebook will show your ad to people most likely to perform your desired action.. And given the trend of ad blocking and browser privacy changes, we can expect the pixel to get less useful in the future — making the API even more important.

The Facebook Conversions API started getting more popular once changes related to iOS 14 were first announced. And Facebook confused matters more by recommending the API during this time.

The problem is, though, that the Facebook Conversions API has to follow the same rules for web events that the pixel does for sending data. If someone opts out of tracking, the API will be impacted in the same ways the pixel is.

Again, though, that doesn’t mean the API isn’t important. If you’re getting fewer conversions reported due to iOS 14, that just makes it more important that Facebook gets as many of the events that it can to report on what it can.

It won’t solve problems related to iOS 14, but the Facebook Conversions API will help improve your reporting that is unaffected by iOS 14.

How to Set it Up

Of course, there isn’t a single method for setting up the Facebook Conversions API. And in most cases, it’s not a simple task (there are exceptions!). It depends largely upon how you’re managing your pixel right now.

Within the Events Manager for your pixel, scroll down to Conversions API. 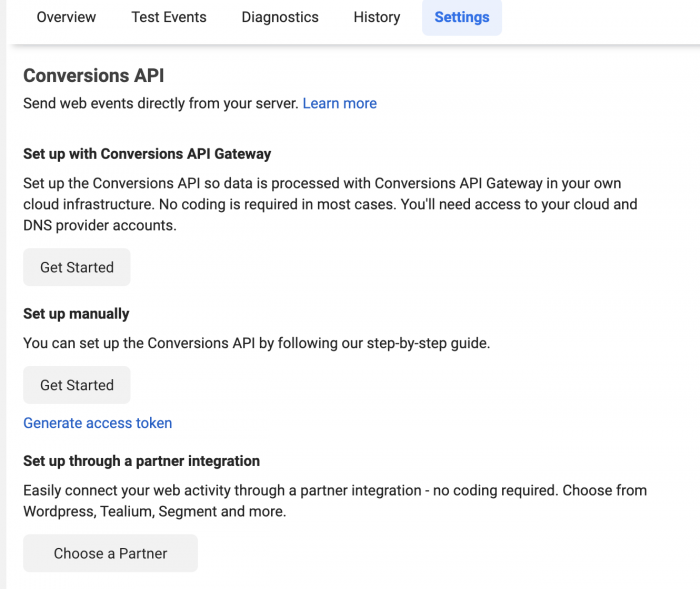 Click to choose a partner. There are several potential integration partners that you can pick from. 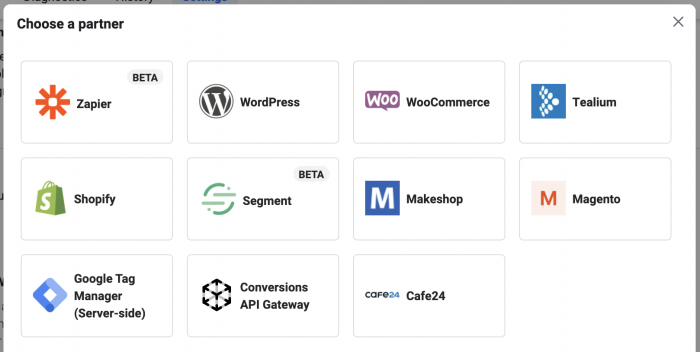 Depending on the partner, the instructions for setting up the API will be different. In some cases, it may be just a matter of a few clicks (the rumor is that Shopify and WooCommerce are very easy). In others, it may require some technical assistance.

I used the Conversions API Gateway to set it up. I wouldn’t say it was easy, but it was finally a solution that allowed me to get the process completed. For the longest time, I ran into hurdles.

Read my tutorial on how I set up the Conversions API Gateway.

Other Uses of the API

Beyond sending web events, you can also send offline events or integrate your CRM. The CRM integration, at least for now, is being used by Facebook for Conversion Lead optimization when running Facebook lead ads. I’ll cover that in more detail later.

Do you have the Conversions API set up? What method did you use? Are you seeing an improvement in performance as a result?