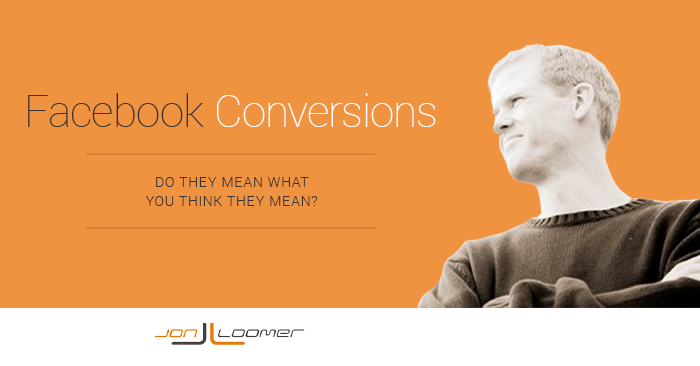 Facebook ads are more powerful than ever, and a big reason for that is Conversion Tracking. But if you use it, do you know what is actually being measured?

Thanks to the new Facebook ads reports — an amazing tool that help advertisers optimize ads with incredible precision — I was recently made aware that the offsite conversions that Facebook reports aren’t always what I thought they were.

Today I’m going to take a look at the following:

What is Conversion Tracking?

First, an explanation is in order.

Conversion Tracking is the ability to track whether your Facebook ads led to offsite conversions.

So, let’s assume you’re using Facebook ads to drive people to an offsite landing page that you control. You are selling a product. With the help of an offsite pixel (a piece of code you put on your website), Facebook can track whether your ad led to a conversion.

This is powerful stuff. You can then compare the cost of your ads to the direct revenue that resulted. This is how you measure ROI with Facebook ads!

This is all great — better than great — but I had some basic assumptions regarding what this meant.

Here’s an example of some results I’ve seen from my reports:

If you hover over the Conversions column, you get the following definition: 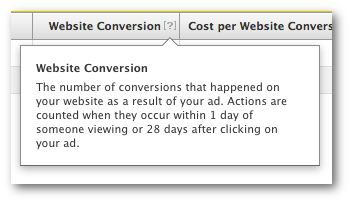 The number of conversions that happened on your website as a result of your ad. Actions are counted when they occur within 1 day of someone viewing or 7 days after clicking on your ad (previously 28).

There are two keys here:

Now, I’m not going to say that information about users who saw my ad and converted isn’t helpful. Or the same regarding users who clicked and eventually converted. Both are important.

But what I improperly assumed was that these were ad clicks that led directly — almost immediately, or at least within 24 hours — to conversions.

How You Can Use This Information

Like I said, I still think information about conversions that started in an ad view is important. And I still want to know if someone who clicked on an ad converted later on.

But the key here is that not all actions are equal.

If someone clicks on an ad and converts that day, there is little doubt that the ad was why they converted.

If someone was shown your ad and converted that day, there is far less certainty. We don’t even know if they saw it.

The same can be said for someone who clicked and converted 7 days later. That ad was part of the process. But it certainly didn’t push the customer over the edge.

Luckily, you can edit your columns to provide much more clarity on the types of conversions you are seeing.

When you click on “Edit Columns,” there are advanced settings at the bottom. Select “Use a custom action attributionAn attribution window is the number of days between when a person viewed or clicked your Facebook ad and subsequently took an action. window” and you’ll see the following: 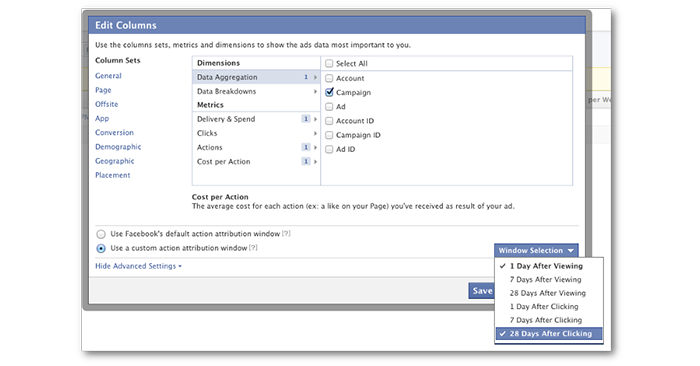 You can select any of the following columns (written prior to the removal of 28-day click attribution):

This provides far more context behind your conversions.

Remember how Facebook reported previously that my ads had resulted in 57 total conversions? Here’s how that’s broken down when you pull in the “1 Day After Viewing” and “28 Days After Clicking” columns:

So, 43 of my conversions were still the direct result of clicking. That’s actually very good to know.

Now, let’s break down those 43 conversions, pulling out those that happened 1 Day, 7 Days and 28 Days after clicking:

You’ll recall that Facebook previously told me that 43 users clicked on my ads and eventually converted. What we see here is that…

This is again encouraging. Most of the conversions Facebook is reporting are actually due to clicks. And a majority of those conversions happened rather quickly.

The problem is that the further you get away from that first day — even from those first few minutes — the less the correlation is between that ad and the conversion. I’m not saying there’s no correlation. It’s just weaker.

I have other efforts going on to get that conversion. I have emails going out. Reminders on my website. Ads away from Facebook.

The other question I have is regarding the multiple ads I have on Facebook. What about the person who saw variations of my ads and eventually converted?

Based on my results, I doubt that the conversion is reported for multiple ads. Some of my ads didn’t perform at all. Some performed incredibly.

What if a user saw four different ads during a 28 day period and eventually converted without clicking? How does Facebook decide which ad led to the conversion? Is it the ad that was shown most recently that gets credit?

In other words, this measurement — for now — is still a bit of an inexact science. But I will focus more on the 1 Day Click to Conversion than the other splits.

How do you measure offsite conversions? Let me know in the comments below!