This is a very big change to the structure of Facebook campaignsThe campaign is the foundation of your Facebook ad. This is where you'll set an advertising objective, which defines what you want your ad to achieve.. In short, you will no longer be able to set a daily or lifetime budgetA budget is an amount you're willing to spend on your Facebook campaigns or ad sets on a daily or lifetime basis. at the ad set level. Let’s dig into the details of what this means…

It’s difficult to overstate how much this changes things. While Facebook hasn’t released numbers on how popular this feature is, it’s safe to assume that a very small percentage of advertisers currently use Campaign Budget Optimization. So forcing it will be a major change in habits and process.

Setting Budgets: Now and Before

The current, default method for setting a daily or lifetime budget is at the ad set level.

With this approach, advertisers set a budget based on a combination of targeting, placement, and bidding. But the primary reason for a new ad set (and budget) was for a different audience.

For example, you may create two different ad setsAn ad set is a Facebook ads grouping where settings like targeting, scheduling, optimization, and placement are determined. based on targeting:

Another example of why you’d create multiple ad sets is to separate countries, particularly when you are spending a bit more. I have found, for example, that the bulk of my paying customers come from the United States, Canada, United Kingdom, and Australia. However, it’s much cheaper to get link clicksThe link click metric measures all clicks on links that drive users to properties on and off of Facebook. and free registrations from other countries.

If I’m promoting a blog post or opt-in, it’s usually not a good idea to include all countries in the same ad set. Facebook will optimize to get the most link clicks or opt-ins. As a result, the ad may be shown primarily to countries that don’t ultimately result in a paid conversion.

In other words, I’m willing to pay more to get clicks and email addresses from certain countries because I know they are more likely to ultimately buy. If I leave it up to Facebook, the optimization may leave me spending very little in these primary countries.

This is why creating separate ad sets by country or country group can be a good idea. It forces Facebook to spend in certain places.

We’ll come back to this later…

Campaign Budget Optimization: What Is It?

Launched a little more than a year ago, Campaign Budget Optimization is an option to control your budget at the campaign level. 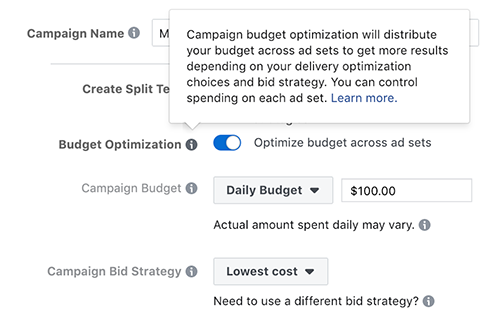 By default, this is off.

When activated, you can control the overall daily or lifetime budget for the campaign. Assuming you have multiple ad sets within that campaign, Facebook then optimizes to distribute your budget to those ad sets. Hopefully, this will be more efficient.

This is very similar to what currently happens with ads. You don’t set a budget at the ad level. You can have multiple ads within a single ad set, and Facebook determines how to distribute the budget between them.

If you want to retain some control over the minimum or maximum spend by ad set, the prior version of Campaign Budget Optimization provided some settings for that…

UPDATE: I was initially concerned that this was going away. After scouring Facebook documentation, I found no mention of ad set minimums and maximums when using Campaign Budget Optimization. However, I reached out to Mike Manning of Facebook, and he confirmed that this feature will be retained.

Help Center has been updated to reflect this.

Let’s use an example Facebook provides in their documentation. Assume you have three ad sets and spend $10 per ad set.

Here’s a visual representation without and with Campaign Budget Optimization… 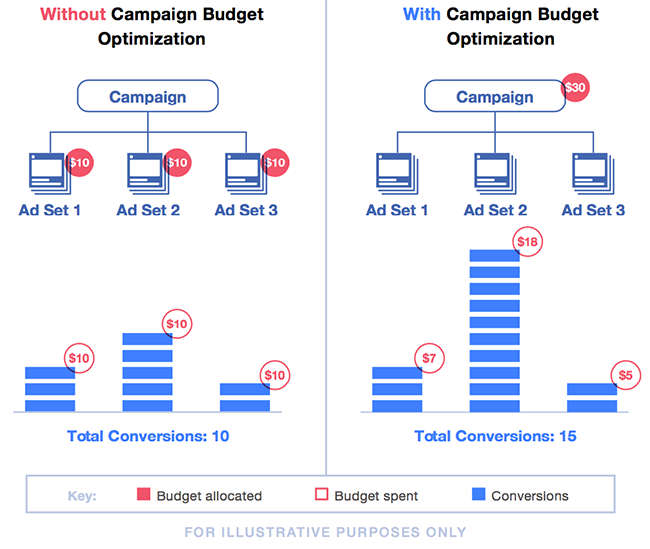 This is all in theory, of course. This is how Facebook says it works. If the feature is valuable, this is how it needs to work.

How is Campaign Budget Optimization Helpful?

Assuming it works and is actually more efficient than the old method (which I realize is a leap), Campaign Budget Optimization does simplify the campaign creation process.

Setting budgets can be a challenge. One of the primary questions I get revolves around how to set budgets based on the size of the audience. And when you split up targeting into multiple ad sets, it becomes a guessing game regarding how you should distribute your budget.

At minimum, this will be good for the less experienced advertiser who struggles with setting budgets.

My Tests with Campaign Budget Optimization

When this feature originally rolled out as an option, I tested it. I had very underwhelming results. At the time, I received worse results with Campaign Budget Optimization than without it. I then quickly abandoned it.

Lately, however, I’ve heard from several members within my Power Hitters Club – Elite community who are using it and getting good results. I’ve since begun to experiment with it again.

My focus with this feature is on two promotions: 1) My free webinar and 2) My Facebook ads quiz. Both utilize the Lead Generation objectiveThe campaign objective is the ultimate goal for your Facebook ad. Your selection will impact options, including optimization and delivery..

For each promotion, I created separate campaigns by country or country group. I then have multiple ad sets within each campaign for both cold and warm audiences. Facebook optimizes budget at the campaign level.

This, though not a glowing endorsement, is a sign that the feature is improving since my original tests.

This is going to be a controversial change. Advertisers have their routines. We’re accustomed to setting budgets at the ad set level, and most of us think we’re pretty good at it now. Many will see this as forfeiting control.

If you are still angry about ad distribution optimization — and you create separate ad sets for each ad so that you can control the budget spent by ad — you aren’t going to be happy about this.

I can tell you that I’ve long let go of this concern. If I create multiple ads within an ad set, I let Facebook do its thing. I’m done losing sleep over it.

This happens at the ad level, too. Facebook distributes budget almost entirely to one ad over another. One ad didn’t even get a chance. We want to see what will happen when that ad gets seen!

Does Facebook know this? Probably not. If your objective is engagement, traffic, or leads, Facebook is focused on getting you those things at the lowest possible cost. They won’t focus on whether these people ultimately buy from you because it isn’t your primary objective of this campaign.

What Should You Do If CBO Doesn’t Work?

The example above seems to be an immediate problem area. Facebook’s algorithms are unlikely to be smart enough to understand that even though a certain user may result in the cheapest engagement or registration, they may not be a good target long-term. At least, I’m going to assume that Facebook’s algorithms aren’t smart enough to sort this out. I’d be hugely impressed if they are.

UPDATE: Since ad set minimums and maximums will indeed survive, this helps tremendously. While you don’t truly set a budget at the ad set level, you can get pretty close by setting minimums and maximums. While I wouldn’t advise using this regularly, this is a very good solution in cases where Facebook isn’t spending the way you’d prefer.

Otherwise, advertisers will simply need to do the same thing they’ve been doing when confronted with similar ad optimization issues. Force Facebook to spend and distribute the way we want.

To do that, we would need to create separate campaigns per ad set (or group of similar ad sets). If you don’t trust Facebook optimization and you feel the need to do this exclusively, it’s going to create some significant headaches.

I would not recommend taking this approach going in. Give Campaign Budget Optimization a chance. See what happens. Then, where necessary, adjust.

If you’re reading this in February, March, April, or May, this change is still a bit in the future. You have time to experiment with this feature and prepare.

However, note that your existing campaigns will migrate to Campaign Budget Optimization. That’s a big deal. That could change how your campaigns are currently running.

In August, this will become an urgent issue. At that point, it will be important to check all active campaigns as the very structure will be changing.

As I type this, about eight months remain until the change goes into effect. There’s time for Facebook to improve Campaign Budget Optimization. There’s also time for us to get better at understanding how to use it efficiently.

What are your thoughts on this upcoming change? Let me know in the comments below!