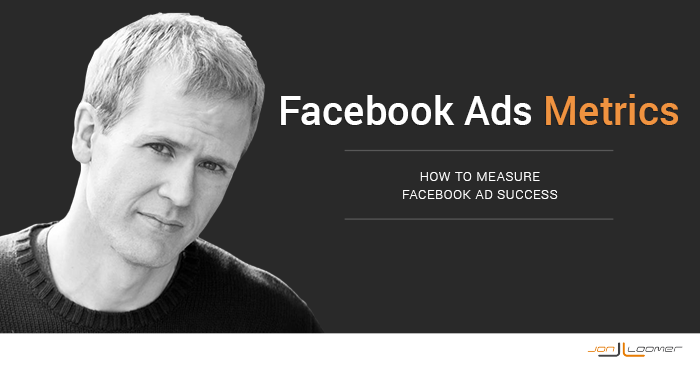 You are wasting time and money focusing on metrics that don’t matter.

The following metrics are given far too much attention. When I ask an advertiser whether their campaignThe campaign is the foundation of your Facebook ad. This is where you'll set an advertising objective, which defines what you want your ad to achieve. was a success, they almost always refer to at least one of the following:

Stop basing success or failure on these metrics alone. They may help provide context. But they should not control your pivot.

The reason is simple. You often have one very definitive goal. It’s not general clicks. It’s usually not reach or impressions (though there are some exceptions). You want a specific action.

Therefore, your focus should be on getting as many of those actions as possible for the least amount of money.

None of the stats listed above tell the whole story. In most cases, I recommend you follow only five things:

Of course, you should use the new Facebook ad reports to monitor these stats.

[Tweet “Are you focusing on the wrong Facebook advertising metrics? Here are the five metrics that matter…”]

Before you even start a campaign, you should know your desired action. It could be any of the following:

If you don’t know your desired action — and it had better be something concrete — you won’t be able to measure success. And when you can’t measure success, you’ll cling to metrics that don’t matter to tell your story.

For any campaign that has a goal that leads to an offsite conversion, you must use Conversion Tracking. Not only is it how you ultimately measure success, but this allows you to have Facebook optimize for that action.

Otherwise, if your goal is Page Likes, you should be running a Page Like Sponsored Story or a standard Page Like ad. In that case, the general click doesn’t matter. You only care about the Like.

Maybe your goal is to drive traffic to your website without the intent of a specific conversion. I often do this when I share my blog posts. In this case, I monitor link clicksThe link click metric measures all clicks on links that drive users to properties on and off of Facebook. closely.

There is a long list of actions that you can monitor. In fact, the Facebook ad reports provide 45 options to choose from.

Yes, that leads to spend! I love seeing these three metrics together when comparing ad or campaign performance.

Spend will let me know if I need to shift my budgetA budget is an amount you're willing to spend on your Facebook campaigns or ad sets on a daily or lifetime basis. from one ad or campaign to another. Or raise or lower the spend of an effective or underperforming ad.

This metric is often ignored.

When I promote posts in the News Feeds of my Fans, I want to be sure that they see it only once. Therefore, my goal is a 1.0 Frequency.

But for other ads that lead to an offsite conversion or Page Like, for example, a greater frequency is required. And that sample size is important when determining whether an ad has run its course.

If an ad isn’t performing, but the Frequency is under 3.0 (depending on the level of underperformance), I’ll typically let it ride for a while. That remains a small sample size.

But if a poorly performing ad has a frequency of 8.0 or more, it’s definitely time to pull the plug.

Likewise, it’s important to put such ads with high frequency under a microscope. The ad may have an efficient overall CPA (Cost Per Action), but it’s likely to become less efficient over time as Frequency rises.

Revenue is a metric that can only be monitored within the Facebook ad reports if you utilize Conversion Tracking with Returned Value (learn more about how you can set it up here).

So far, you know which of your ads return the lowest Cost Per Action. You use Spend and Frequency to provide perspective.

But are your ads providing a positive ROI? You won’t know that without following Revenue!

What Facebook ads metrics do you monitor closely? Let me know in the comments below!