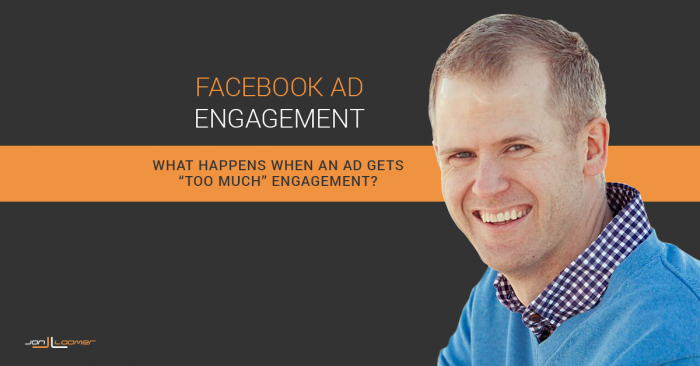 Is it possible to get “too much” Facebook ad engagement? I started asking that when ads that got great engagement received a high percentage of organic distribution.

I know, the question sounds ridiculous. Especially since Facebook marketers are notorious for complaining about their lack of organic reach on posts that weren’t ads.

The truth is that the paid results Facebook reports only make up a part of the story. And if you have a particularly strong ad, Facebook may be leaving out quite a bit of information that helps you measure the success of that ad.

This became especially evident in an experiment I’m running right now. That organic distribution can actually cause problems and confusion when people see “ads” they aren’t supposed to see — because they aren’t actually ads at that moment due to the engagement by a connectionWithin your ad set, you can further narrow targeting by adding a connection to a page, app, or event that you control..

[Tweet “Is it possible for a Facebook ad to get ‘too much’ engagement? Let’s take a look…”]

I’m performing a little experiment. Would you like to participate?>> CLICK ON THE IMAGE THAT APPLIES TO YOU AS A…

I also promoted this to my fans. I then created another version as an ad only and targeted my website visitors. This isn’t important since my focus won’t be on those ads, but the background is necessary.

The concept is this: I want people to segment themselves by clicking on one of the images within a carouselA carousel allows you to display two or more scrollable images or videos in the same ad, with the ability to link each to a different URL. ad indicating whether they are an advanced, intermediate or beginner Facebook advertiser. I will then show them promoted content catered to them as such.

I’ll get into the details regarding how this is done at another time. But the primary way this works is with Website Custom AudiencesA website custom audience matches people who visit your website with people on Facebook. You can then create ads to show to that audience..

Once a person clicks on the “Advanced” image, for example, they immediately fall into a 30-day campaignThe campaign is the foundation of your Facebook ad. This is where you'll set an advertising objective, which defines what you want your ad to achieve.. That campaign starts with a video that will be shown to them for the first three days, welcoming them. After that, I ask them to complete a quiz to get a better idea of their “advanced” level.

From there, I will show them content during the final three weeks or so that I think will matter most to them. After those 30 days, they fall out of the campaign. This is an example of an evergreen campaign — you may have heard me talk about the concept before.

Again, I don’t want to go into all of the details of the campaign right now. But the background was necessary.

The main takeaway is that people are engaging with this content at a very high rate, and it’s led to some unexpected consequences.

As I mentioned above, if you clicked the “Advanced” image link within the first campaign, you’d be added to a series of Website Custom Audiences for advanced Facebook advertisers. That would be the primary source of my targeting for the advanced group.

The first ad these people would see after clicking the “Advanced” image is a video. Here is a recap of some of the primary metrics for that ad in my ad reports…

At first glance, it’s really not that impressive. Getting $.05 per video view is nothing to write home about. However, keep in mind that the CPMCPM measures the cost per 1,000 impressions. It's a good metric to evaluate competition level and costs to reach your audience. is pretty high at over $15. A big reason for this is that I bid extremely high to make sure I reach as many of the people in the audience as possible.

Anyway, that’s again a discussion for another day.

The primary thing to see here is that if we look only at the ad reports, this video reached 2,175 people and got 2,378 video views (some people watched it multiple times!). Immediately, that over 1:1 ratio is fantastic engagement.

Finding that organic distribution isn’t particularly easy, either. Since this video exists only as an ad, it’s not as if I can go to my page or even my page Insights to find it. Instead, I need to find the permalink for the ad — this is where I’m directed when I get a notification about a new comment on the ad. 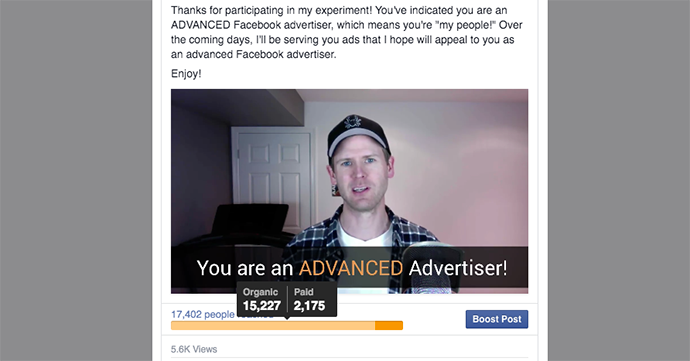 Do you see what I see?

My ad reports tell me that the ad reached 2,175 people. In reality, it reached 17,402 people. It’s not that the ad report was lying. It was only reporting on paid reach.

So Facebook was only reporting on 12.5% of the reach in the ad reports. While the ad was only published as an ad (never published to my page), nearly 88% of the audience ended up being organic.

That also means we could alter our evaluation of this ad. While the ad reports told us there were 2,378 video views, there have actually been approximately 5,600. So in reality, my cost per video view is actually closer to $.02.

Sure, the people I targeted engaged with the video at a far higher rate than those who engaged organically (109% vs. 21%). That should also be expected — it means I targeted well! But we shouldn’t ignore that organic engagement either.

Normally, I wouldn’t be all that concerned that about 88% of the reach on an ad is organic. It tells me that the ad is performing well!

But in this case, it presents problems. Maybe they are problems that aren’t typical to a campaign, but the problem highlights what can happen when an ad gets “too much” engagement.

While the comments on that ad are overwhelmingly positive, here’s a sampling of the not-so-positive response… 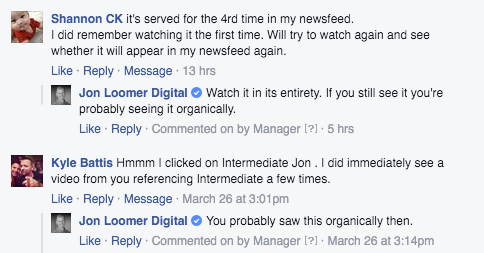 Note that I’m excluding people once they’ve watched at least 50% of the video (I use Engagement on Facebook Custom Audiences to do that). So the first person may have simply failed to watch 50% of the video.

But the second is a clear case of someone who was very likely seeing the “ad” organically. They didn’t click the “Advanced” image, they clicked “Intermediate.” And while they had been served the intermediate video as well, they were now seeing the advanced one — and they aren’t supposed to!

Again, normally, this isn’t a problem. But this experiment is a perfect storm for it to become an issue:

If the purpose of this campaign was to sell sleeping bags, no one would care — or probably notice. But the organic distribution will lead to people seeing an ad that I had intended for someone else.

How I’m Combatting It

The organic distribution of that post is about 62%. But I have a long list of comments on it from people who think they shouldn’t be seeing it.

There are many explanations for why someone might be seeing that ad when they think they shouldn’t be. But while users are quick to blame either the advertiser or Facebook, the reality is that neither are normally at fault. It’s often due to one of the following:

Particularly on that primary ad, I had replied to countless people about this, and it was beginning to get exhausting.

How do you solve this “problem”? On one hand, the best solution would be that no one ever commented, liked or shared the ads. That would keep distribution to precisely the people I targeted. But that wouldn’t happen, and that’s a pretty silly solution.

Instead, I’m now creating ads as a carousel — I promote the primary link as the focus of the ad, but the second image links to a page where I explain Why You Might Be Seeing an Ad When You Think You Shouldn’t Be (feel free to read it if you’re interested!). 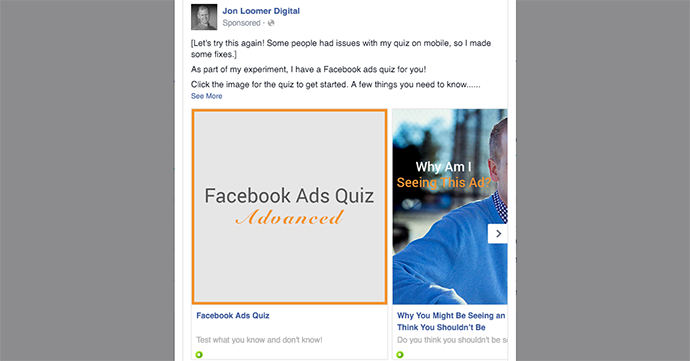 What you don’t see in the ad above is that in the final bit of copy I include this message:

Finally, it’s possible you’re seeing this right now when you think you shouldn’t be. I always get those comments below! I added the “Why You Might Be Seeing An Ad You Think You Shouldn’t Be” post below to help answer that question.

That seems to have helped!

While this may be an extreme example, this is something we need to consider. I’ll often hear from people who are upset that they have comments from people in countries they were not targeting in their ad (or some other characteristic), but this is precisely how it happens.

What do you think? Have you ever seen organic distribution of ads cause problems?