I’ve been running an experiment for more than a month now, and I wanted to share my initial results. The goal was simple: Reach all, or most, of my Facebook followers with a single ad. I spent $300 to reach the first 100,000 Facebook followers in 30 days.

Let me walk through how this campaign was set up, my expectations, and what actually happened during those first 30 days. Then I’ll also summarize what’s happened since then (the test remains ongoing) and how we can apply what’s been learned.

I created a campaign using the Reach objectiveThe campaign objective is the ultimate goal for your Facebook ad. Your selection will impact options, including optimization and delivery. More. 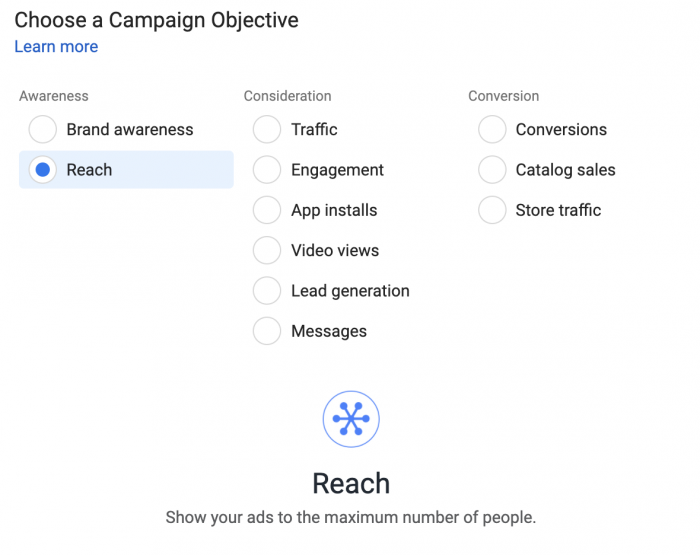 While my goal is to reach everyone, I don’t care that much whether everyone actually sees or pays attention to the ad. I’m going to make my attempt, and if you see it, you see it. If you don’t, no big deal.

As such, I used a frequencyCalculated as (Impressions/Reach), Frequency is a Facebook ads metric that measures the average number of times users have seen your ad. More cap of 1 in 90 days.

While this doesn’t guarantee I won’t reach people more than once, Facebook will attempt to cap frequency at one impression in 90 days. My overall average frequency is 1.13, so Facebook is keeping close to that promise.

This may seem reckless on the surface, but it’s all part of the test. You’ll recall that I have a frequency cap of 1 in 90 days, so Facebook won’t be able to spend all of my money on countries that are the cheapest to reach.

I decided to go with most, but not all, placements. 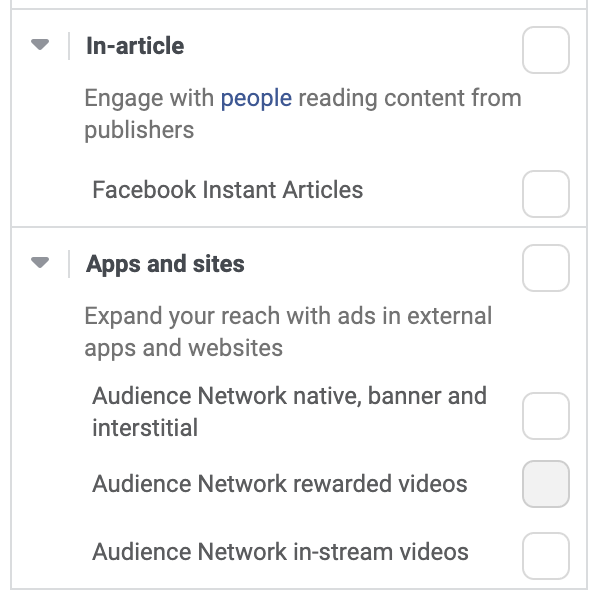 I removed Audience Network placements due to prior bad experiences. I would eventually remove in-article placements since I was getting reports of people seeing my ads multiple times there. I didn’t want that to happen, so I just removed the placement entirely.

I used a $10 per day budgetA budget is an amount you're willing to spend on your Facebook campaigns or ad sets on a daily or lifetime basis. More.

When I did this, I didn’t give it much thought. But, if I were to do it again, I’d likely use $20 — or increase the number of days in my frequency cappingFrequency capping allows you to limit the number of times your audience sees your ad during a given window of time. More settings. I’ll explain why later.

The ad itself is nothing special. If I were to do it all over again, I’d probably do it differently. But it’s a simple image and text. 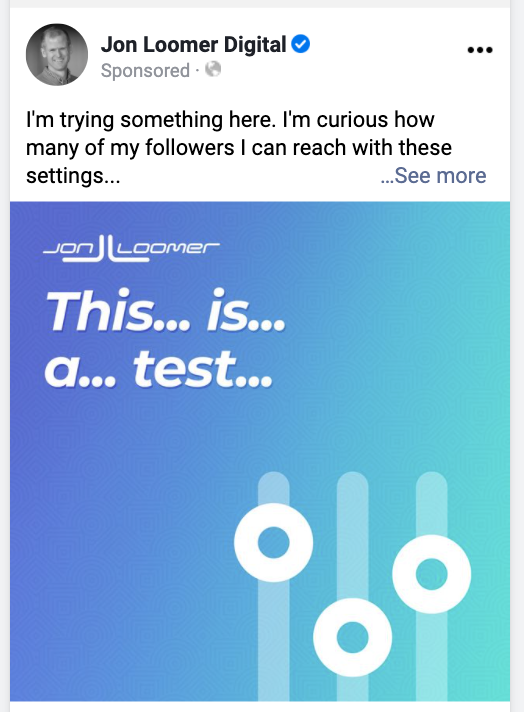 Buried under the “See More,” I explain exactly what I’m doing with the ad.

My hypothesis was that I would reach few, if any, people in those four countries initially. I may need to exhaust other countries first — at least those that are cheapest to reach.

So, I expected to reach a lot of people early, due to low CPMs. And I assumed the number of people I reached would steadily drop while the CPMCPM measures the cost per 1,000 impressions. It's a good metric to evaluate competition level and costs to reach your audience. More costs increased over time.

My expectations weren’t all that far off. The first day was almost everything I had expected. The CPM was an insanely low $.56. I reached more than 17,000 people on that first day. But, what I didn’t really expect was that I was able to reach some people within those expensive four countries.

Of course, that number was very low on Day 1 (6). But it increased quickly from there.

Here’s a chart laying out the total number of people reached (in 10,000s) compared to the CPM by day during the first 30 days. 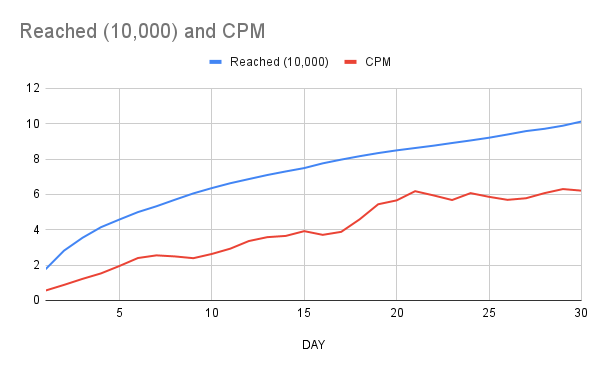 Here’s another way of looking at the number of people reached by day during the first 10 days (CPM in parentheses):

As you can see, it was a sharp difference in number of people reached and CPM during the first few days. But, then it started stablizing. The CPM would stay consistent from day to day, trending upward, but it wouldn’t always increase.

What Has Happened Since

Through Day 46, I have now reached over 116,000 of my followers. These days, more than half of those I reach are from the four most expensive countries. 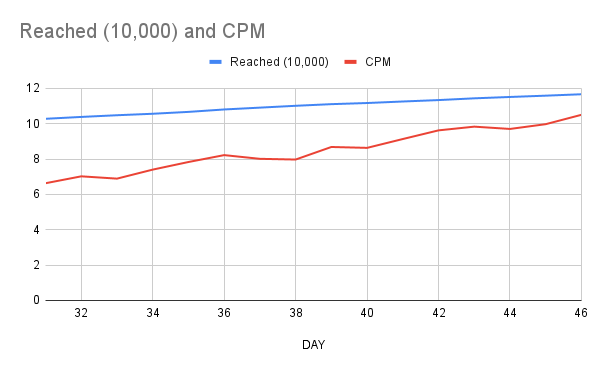 We’re in a weird place because it’s also the holidays. Will CPMs come down a little in January and February? If not, I can expect those costs to only increase, leading to reaching fewer and fewer of my followers every day.

I mentioned earlier that I’m regretting not either using a higher daily budget or extending the frequency cap to something like 1 in 120 days. The reason is that I do not expect to get close to the full 196,000 by the 90th day. Once we get to Day 91, of course, the frequency cap would allow Facebook to reach people again who were reached on Day 1.

That said, I think it’s reasonable to expect that I’ll be able to reach about 150,000 of my followers with this test. It’s been fun seeing the responses from people when I reach them, usually sharing the country they’re from.

What Can We Do With This?

One of the things I’ve always struggled with is how I deal with my audience that doesn’t live in one of the four core countries. While people in those countries make up more than half of my paying customers, how can I pay attention to the rest?

The challenge is that with most campaignsThe campaign is the foundation of your Facebook ad. This is where you'll set an advertising objective, which defines what you want your ad to achieve. More, I can’t go worldwide. When I do that, Facebook will ONLY focus on the countries other than those core four. And I don’t want that either.

Let me provide a way I plan to use this…

See it as that one email you get in a drip campaign. Your subscriber may not open that email. But you sent it. And you won’t keep sending it over and over.

This could technically be something that repeats itself. Again, it’s an evergreen promotion. Maybe next time I use a $20 daily budget and run an ad promoting my Power Hitters Club – Elite community. I keep the frequency cap at 1 in 90 days. After 90 days, it will repeat.

That means that the campaign itself would cost $1,800. A PHC – Elite membership is $147 per month. If the campaign resulted in a single new member who spent the entire year in the community, I would nearly break even. Two and it’s a profit.

I could do the same with targeting my email list. And really, you don’t have to go worldwide as I have. But you can and still expect to reach people in the more expensive countries.

What do you think of this approach? How might you apply it?