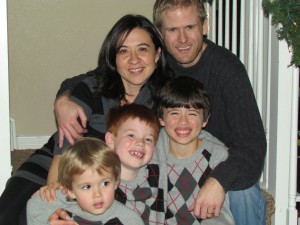 From our family to yours, Happy New Year!

I don’t typically get too personal on this blog, but I wanted to take this opportunity to reflect on a year of challenges, and thank you for being a big part of why it was still great. It’s been quite a year in the Loomer house. Life-changing.

It was a year of beginnings, ends, rebirth and redefinition. 2011 was a year defined by change, challenge and opportunity.

I was laid off in August, but four months later I still see that moment as an opportunity to put my life on the path towards full professional fulfillment. My wife might argue that it was the moment we put all financial decisions on hold, but that’s the way the CFO (and CEO) of Loomer, Inc. is supposed to be thinking. Even after having had amazing opportunities with the NBA and American Cancer Society, it was time to grow.

It was the year our oldest son marked his eighth year being cancer free; the year he played his first season of player-pitch baseball and emerged as his coach’s (and dad’s and biggest fan’s) ace pitcher; the year he won the spelling bee for the second straight year; and the year I accepted that none of his accomplishments going forward would occur without bringing a tear to my eye.

It was the year my passion project, PastKast, developed into something great. I completed the first full year, retelling an historic season in real time. And we retold two.

It was the year I finally decided to stop dreaming about being my own boss, and it was the year I decided to start doing. This website was born in September, initially as an an interactive résumé and then slowly transforming into a consulting site. The transformation wasn’t immediate as it took me time to build up the courage to commit.

After two months, it finally became painfully obvious that my new “business” needed a Facebook page, and it was born in November. I’ve used it to show that I can apply what I know and practice what I preach.

It was the year that I stopped talking about writing a book and finally wrote one (okay, an eBook — but it’s a start!).

Today, I’m optimistic and excited for what’s in store in 2012. I don’t know what exactly is in store, but I have a vision of what might be, and it’s awesome. You may be family or a friend or someone who simply found me as someone who can help solve a problem. I’m happy to have you along for the ride and humbled that you read this site and support me personally and professionally.

From our family to yours, may it be a great one for all of us. Happy New Year!