The challenges related to tracking, targeting, and optimizationHow you optimize impacts who sees your Facebook ad. Facebook will show your ad to people most likely to perform your desired action. More have increased during the past couple of years. And yet, Meta has a solution that is sitting right in front of them. Meta needs to leverage Outbound ClicksOutbound clicks measure the number of clicks on ads that take people to properties away from Facebook. More.

This isn’t a particularly complex concept. Even the simplest application could be a huge help for advertisers looking to send traffic to their stuff — whether it’s on a website they own or a third-party website.

In this post, we’ll cover the obstacles these advertisers currently face, what Outbound Clicks are, and how they could be leveraged for the advertiser’s benefit.

There are a couple of groups of advertisers who could benefit from an expansion of Outbound Clicks.

1. Advertisers who sell on a third-party website. This is one of the most frustrating places to be. If you can’t use your pixel, you aren’t able to track results, optimize for a conversion, or target those who clicked on your ad.

2. Advertisers who are heavily impacted by iOS 14+. If a large percentage of your audience consumes your content while on an iOS device, tracking opt-outs could significantly impact your reporting, optimization, and retargeting.

Outbound Clicks aren’t going to solve all of these advertisers’ problems, but they can absolutely help — assuming Meta leverages them properly.

Before we get to how Meta could leverage Outbound Clicks, it’s important that we explain what they are — and how they’re different from other metrics. Let’s define the various “Click” metrics that are often confused.

Clicks (All)The Clicks (All) metric includes all clicks on your Facebook ad (link clicks, clicks on media, post reactions, comments, shares, and more). More: This includes ALL clicks on your ad (like it says). So, link clicksThe link click metric measures all clicks on links that drive users to properties on and off of Facebook. More, clicks to your page profile, post reactions, comments, shares, clicks to expand media to full screen, clicks to take action (liking your page or RSVP for an event), and more. Everything.

This also applies to CPC (All) and CTR (All). If you’re following these metrics, you’re looking at total engagement on your ad, and not just clicks on a link to the thing you’re promoting.

Link Clicks: This is the number of clicks on links within the ad that lead to advertiser-specified destinations, on or off Meta technologies. While links away from Facebook are included in these clicks, it can also include clicks to open other experiences within the ad, like click-to-call, click-to-message, lead forms, playable experiences, and more.

This also applies to CPC (Cost Per Link Click)Facebook reports on CPC (All) and CPC (Link Click). The first refers to all clicks and the second on all internal and outbound links. More and CTR (Link Click-Through Rate).

Outbound Clicks: The number of clicks that take people away from the Meta family of apps. This includes clicks on links in the displayed ad as well as links to external websites and apps within Instant Experiences, lead forms, and collections.

Of course, the most valuable of these click metrics for advertisers would be the Landing Page View. We know that someone clicked on our ad, was redirected to our website, and the website loaded. But, of course, this may not be an option if you are sending someone to a website where your pixel doesn’t exist (like Amazon).

As discussed earlier, one of the most annoying challenges for an Amazon seller, for example, is that they can’t target those who clicked their ad and went to Amazon. Their pixel isn’t on Amazon, so a Website Custom Audience wouldn’t be possible.

Let’s say that you have an initial prospecting ad that promotes your product, sending them to Amazon. How do you remarket to those who initially engaged with that ad? Right now, your options are limited. If you used a video, you could target those who watched that video. You could also target a Page Engagement custom audience, which allows you to reach anyone who has clicked on any post or ad. That’s not ideal either.

But, what about a custom audience based on Outbound Clicks? It wouldn’t matter whether your pixel exists on the external website. You could target anyone who clicked on your ads to an external website.

The Page Engagement custom audience was too broad. This limits those clicks to outbound clicks.

Of course, it would be nice to add even further granularity. What if, when creating these audiences, you could select the ads or URLs that you used for these posts or ads? Then you could create audiences based on the specific website pages people went to after clicking your ad. 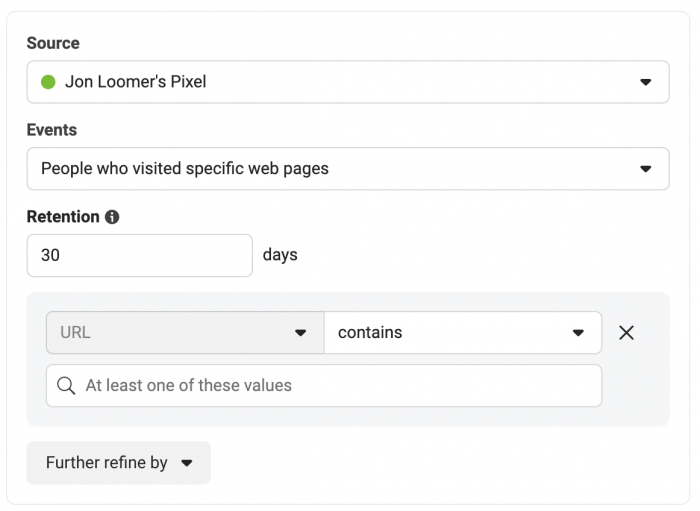 This could also, potentially, help advertisers who have a high concentration of iOS users who have opted out of tracking. Meta is super unclear about how opt-outs impact targeting (only that these audiences will be smaller), but I assume this to mean that a user who opts out of tracking will no longer be included in website custom audiencesA website custom audience matches people who visit your website with people on Facebook. You can then create ads to show to that audience. More.

But, of course, opt-outs do not apply to activity on the Facebook platform. So, an Outbound Click could conceivably be used as the source for a targeting audience.

If you’re selling a product on Amazon, you can’t optimize for a conversion because your pixel doesn’t exist there. You also can’t optimize for Landing Page Views for the same reason. Your primary option, if traffic is your goal, is Link Clicks. 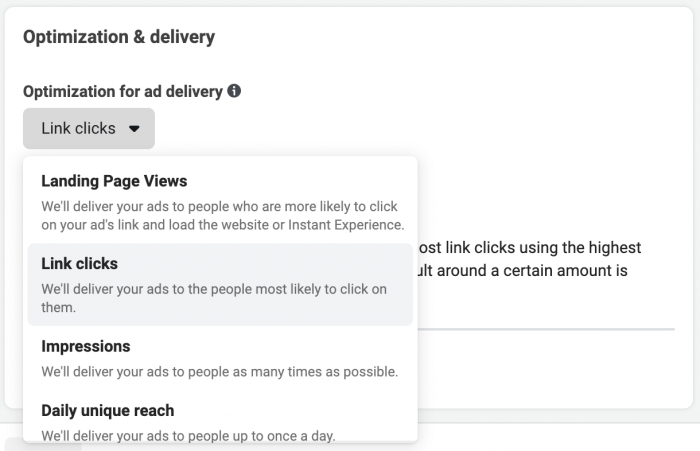 What if you could also optimize for Outbound Clicks? This would assure that Meta’s ad systems are looking specifically for people who will click out to an external website or app.

Now, the difference between Link Clicks and Outbound Clicks (discussed above) is subtle, but wouldn’t it make sense to offer an option to optimize for Outbound Clicks? Especially if your ad includes other experiences that could be counted as a Link Click but not an Outbound Click, it would certainly help the advertiser get the specific actions they want.

Do you think Outbound Clicks could be used to fill some holes for advertisers? What other solutions would you add?