It’s important to understand that your Facebook ads costs aren’t determined in a vacuum. It won’t always cost the same amount to get that click or conversion. In fact, the rate at which people act on your ads could remain constant while your costs could fluctuate wildly.

Why? The role of competition.

Competition will become a bigger issue for most advertisers during the final quarter of the year. Let’s discuss how competition could impact your costs.

How the AuctionFacebook uses an ad auction to determine the best ad to show to a person at a given point in time. The winner of the auction is the ad with the highest total value, based on bid, estimated action rates, and ad quality. More Works

Assuming you select Auction buying when creating your campaign (this is the default, and this is likely used 99.9% of the time), your ads are delivered based on an ad auction.

For each ad impression, our ad auction system selects the best ads to run based on the ads’ maximum bids and ad performance. All ads on Facebook compete against each other in this process, and the ads that our system determines are most likely to be successful will win the auction.

Your ads will compete with the ads of other advertisers when determining which ads a targeted user will see. The primary factors for determining the winner are bid, estimated action rates (probability someone will engage with an ad), and ad quality.

By default, Facebook delivers ads based on an “automatic” bid. Instead of you making a manual bid, Facebook will automatically bid what it takes to get the most actions for the least cost (while reaching the audience most likely to act). You can use cost control as well, but this is a manual adjustment.

So, Facebook will bid “what it costs” to reach your desired audience. The more competition there is to reach that person, the more Facebook will need to bid.

If you aren’t competing against another advertiser to reach a particular user, you can expect it to cost very little to deliver the ad. But that, of course, isn’t realistic. There are millions of advertisers looking to show millions of ads to many of the same users.

High-performing ads will do better in the auction as Facebook will prefer your ad. It may be more difficult to get distribution if people aren’t acting favorably on your ad. Or it may cost a lot in the auction to get your ad shown.

On average, the higher the level of competition, the more it’s going to cost to show your ad; the lower the competition, the less it will cost. This only refers to the cost to be shown, of course, and not whether your ads are attracting your desired actions.

This becomes most obvious during high-competition times. When are more advertisers participating in the auction? When are advertisers spending more than usual? Think about seasonality. Some advertisers are inactive until the final couple of months of the year. Some spend less until then. The more budgetA budget is an amount you're willing to spend on your Facebook campaigns or ad sets on a daily or lifetime basis. More that’s pumped into the auction, the more it’s going to cost to reach people.

But seasonality isn’t the only example of high competition. Some industries, for example, may see far more competition than others. Some users and interests may be popular to a niche of advertisers. As a result, there could be many advertisers competing for the same users.

The result of this competition is increased costs. And if your ad isn’t high-performing, you may see an even greater impact as Facebook doesn’t prioritize your ad in the auction.

Competition and CPMCPM measures the cost per 1,000 impressions. It's a good metric to evaluate competition level and costs to reach your audience. More

One important metric to monitor related to the rise and fall of competition is CPM (Cost Per 1,000 Impressions). This is essentially how much it costs to reach your target audience. While fluctuations in CPM can be related to many factors, one is certainly competition. This has a significant impact on your overall costs.

You can see this in your ad reports by adding a column for CPM. First, click the Columns drop-down and select “Customize Columns.”

Then search for and add CPM to your report.

Once you’ve added the CPM column, click the BreakdownBreakdown is a way to get insights into your ad performance related to time, delivery, action, or dynamic creative element. More drop-down, select “Time” and then “Day” (or “Week” if you’ve been running this for a long time). 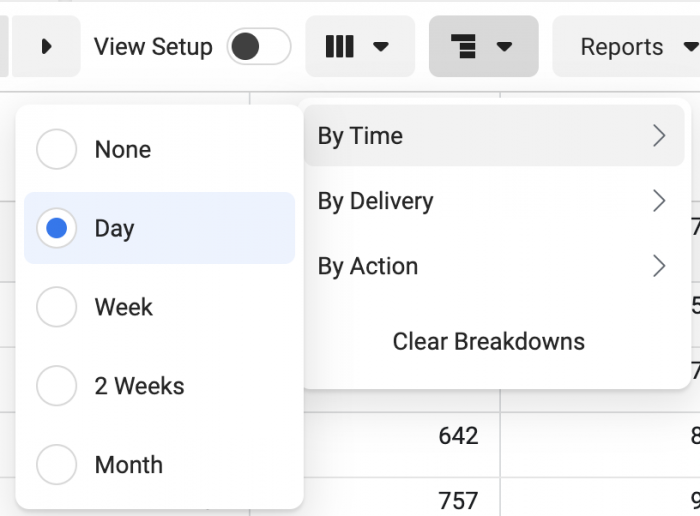 Now you can get a sense of whether CPM has been increasing, potentially leading to increasing costs. 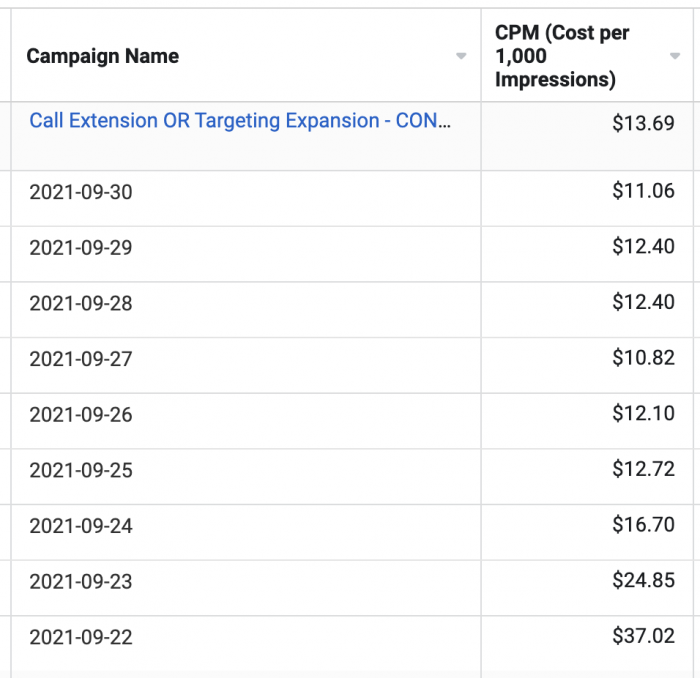 It’s not easy to control CPM. Sometimes, you just can’t due to high competition. Most importantly, you should monitor it and understand why it’s happening. Because ultimately, your ads may be performing normally in terms of action rate, but you’re showing them during a time that’s resulting in higher costs.

How to Monitor Competition

The Inspect Tool is a feature that highlights many important metrics, including one that helps monitor competition — and whether it may be leading to increased costs. Note that the Inspect Tool is not available for all objectivesThe campaign objective is the ultimate goal for your Facebook ad. Your selection will impact options, including optimization and delivery. More and campaignsThe campaign is the foundation of your Facebook ad. This is where you'll set an advertising objective, which defines what you want your ad to achieve. More, but it’s useful when available.

Select an ad setAn ad set is a Facebook ads grouping where settings like targeting, scheduling, optimization, and placement are determined. More and click the “Inspect” icon on the far right (it looks like a magnifying glass).

Use a long window of time here, like 30 days or more if you can. You may not get data otherwise.

There is a lot of great information here, but one of the charts is for Auction Competition.

Competition is reflected with data points using percentages. For a data point of 5%, you are seeing competition that is 5% higher than normal for this selection. Facebook considers anything between 20% and -20% to be stable. If competition goes above 20% and costs are increasing, those increased costs may be related to competition.

CPMs and Auction Competition may help you uncover why your personal costs are increasing. But something else you can do is monitor how CPMs are rising and falling across the industry.

One tool we like to use is the Within Marketing Pulse Dashboard (it’s free).

They offer a lot of great data, but one of their charts tracks Facebook, Instagram, and Overall CPM over time.

During “normal” years, we’ll often see CPMs triple during the holidays. Of course, it’s been two years since a “normal” one, so we really don’t know what to expect during the final months of 2021.

If your costs are soaring as a result of competition, there are several potential actions to take.

1. Change the target audience. Especially if the competition isn’t seasonal, trying a different audience may help you get the costs down. You may even try Targeting Expansion or Lookalike Expansion.

2. Change your ads. The best way to overcome competition is to have highly engaging ads. Look at improving copy, creative, or your offer to give you an advantage.

3. Consider a pause. It’s possible that your ads simply won’t be profitable during a high-competition period. You may want to lower your budget or shut it down entirely if competition is so high that you’re not getting profitable results.

Are you seeing the impact of competition on your Facebook ads costs? What have you been doing in response?