Lookalike Audiences are one of the oldest shortcuts for isolating a broad audience for targeting. Advertisers can also experiment with Facebook Lookalike Expansion to yield optimal results that scale.

Of course, this is not to be confused with Targeting Expansion, which I wrote about recently. They are similar… but different.

Let’s talk about what Lookalike Expansion is, why you might use it, and how it differs from Targeting Expansion.

What is Lookalike Expansion?

Lookalike Audiences allow you to create bigger audiences of people similar to those who are already connected to you (email list, website visitors, page engagement, and more). You can have Facebook find the people who are in anywhere from the top 1% to 10% within a country or region who are most similar to your source audience. 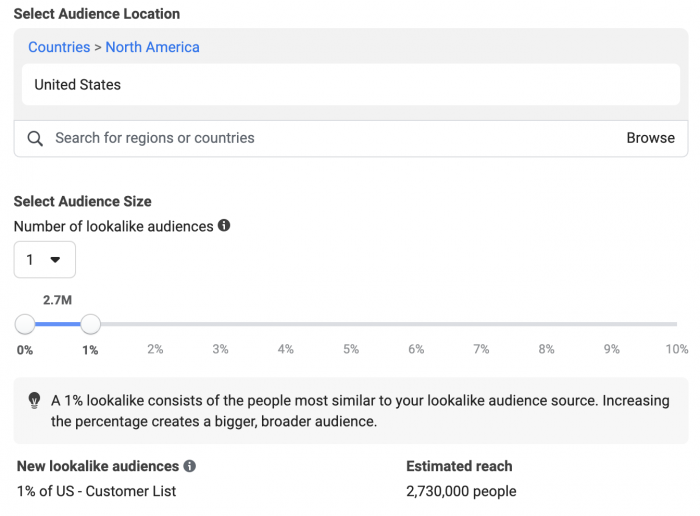 A question I often get is related to what percentage you should use for your Lookalike Audience. I typically tell advertisers to test and experiment. But it would seem, if it works as it should, that Lookalike Expansion will help simplify this process.

Lookalike Expansion allows Facebook to dynamically expand your audience if their system finds better performance opportunities beyond the percentage you selected.

Our ad delivery system uses the Custom Audience that you based your lookalike audience on as a guide for ad delivery, while also dynamically assessing performance. If our system finds better performance opportunities beyond the percentage you selected for your lookalike audience, lookalike expansion allows us to dynamically make updates that reflect where we’re seeing better performance and we may expand your audience further to include similar opportunities.

Lookalike Expansion is automatically enabled for new, duplicated, and draft campaignsThe campaign is the foundation of your Facebook ad. This is where you'll set an advertising objective, which defines what you want your ad to achieve. More and ad setsAn ad set is a Facebook ads grouping where settings like targeting, scheduling, optimization, and placement are determined. More optimizing for conversion, value, or app events using the Conversions objective. You’ll notice a checkbox after selecting a Lookalike Audience when creating such a conversions campaign.

Note that Lookalike Expansion will not expand beyond the ages, genders, locations, or exclusions that you indicate in your targeting. Lookalike Expansion cannot be used with other objectivesThe campaign objective is the ultimate goal for your Facebook ad. Your selection will impact options, including optimization and delivery. More beyond Conversions or with Special Ad Categories.

Much of this may sound very similar to our discussions about Targeting Expansion. When turned on in that case, Facebook will test and monitor to determine if more or cheaper conversions can be found outside of your designated audience. If so, Facebook will dynamically expand to reach these other people. Facebook uses the targeting you select as a guide.

One way Targeting Expansion is different is that, unlike Lookalike Expansion, it is used when targeting demographics, interests, and behaviors. Facebook doesn’t come out and say this in their documentation, but this is also assumed to include custom audiences (we’ve tested to confirm).

The checkbox to turn this on is found below Detailed Targeting within the ad set.

Targeting Expansion is now on by default (and can’t be turned off) when used with the Conversions objective. It is off by default (but can be turned on) when used for all other objectives (other than Reach and Awareness, which are not eligible).

Ultimately, Lookalike Expansion can only be used for one very narrow scenario — when you are targeting a Lookalike Audience while using the Conversions objective. You could technically use both Lookalike Expansion and Targeting Expansion (which would be on by default) in such a situation.

How to Use Lookalike Expansion

I alluded to it earlier, but there is one very clear value to this. There are limitless ways to create Lookalike Audiences. What will be the source? For which countries? What percentages will you use? It’s a lot to consider and test.

I’ve consistently used 1%, since this should be the most relevant group that is most likely to be effective. But that’s not always the case, of course. A bigger or different audience may result in lower competition and CPMs, leading to lower costs. You just never know without testing, testing, and testing some more.

If Lookalike Expansion works the way it should, I see no reason to turn it off if given the option. Start with a smaller, highly relevant Lookalike Audience. This will usually be 1%, but it could be the top 3% or 5% in smaller countries. Use that as the starting point. Then, turn on Lookalike Expansion so that Facebook can expand the audience if necessary.

The “if necessary” is the key. Assuming it works as designed, Facebook won’t necessarily expand if the audience is working as well as it can. But if Facebook’s ad delivery systems see that you can get more and cheaper conversions by expanding to a larger percentage, it will.

This would also seem to be a good way to scale an ad set — or at least maintain solid performance for a longer period of time. If frequencyCalculated as (Impressions/Reach), Frequency is a Facebook ads metric that measures the average number of times users have seen your ad. More is increasing or you’re beginning to exhaust the highest performers within your designated Lookalike Audience, the assumption is that Facebook could expand beyond that group to maintain or improve performance.

But Does it Work?

I discussed this while talking about Targeting Expansion as well. One very big problem is that Facebook provides nothing within reporting to help you understand how well Lookalike Expansion is performing — or how much it is being applied.

For example, let’s assume you are targeting a Lookalike Audience (top 1%) and have Lookalike Expansion turned on. You’re getting great results. But was Lookalike Expansion applied? How far beyond that top 1% did Facebook go? What percentage of your results were from the originally targeted audience?

This is my big issue with both expansion products. How they work, how much they work, and how well they work are all hidden behind the Facebook Black Box. If our ad set is effective and expansion was turned on, we have no idea if it was effective BECAUSE it was turned on. And that’s not helpful for advertisers looking to get consistent results.

I’m not suggesting that a dynamic Expansion is unnecessary. I just wonder if having both Lookalike Expansion and Targeting Expansion creates too much confusion. Why not just have Targeting Expansion? It can still function in the same ways when using Lookalike Audiences, but you won’t have a whole new box and term to confuse people.

Of course, there are some differences in how the two expansions are applied related to defaults and objectives that would need to be made uniform, but it would seem to be a good simplification for Facebook. I’m sure I’m not the only one who took some time to understand the difference between the two.

Have you experimented with Lookalike Expansion? What kind of results have you seen?