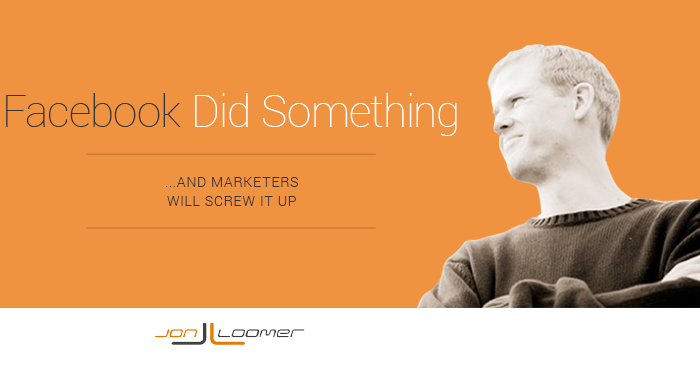 [AUDIO VERSION: As an experiment, I also recorded an audio version of this blog post. Click below to listen. Let me know if this is something you find helpful!]

Facebook recently announced that they are rolling out the long-tested feature of surfacing posts from pages users don’t like that tag pages they do. I considered writing a long response to this development. And then I realized something…

My response is virtually identical to any Facebook feature change that impacts what users see in the News Feed: Brands will abuse it to the point of rendering it useless.

The end result is that, though the change was meant to help brands, it will ultimately be reversed or countered when brands take it too far.

1. Text Updates: There was a time when text updates received more Reach than other content types. The reason for this was that Facebook, always wanting to encourage engagement, noticed users are more likely to create their own content when they see text updates.

The problem? This wasn’t true of brand text updates. Why? Because brands used them in a completely different way than users did.

When a user just wanted to tell their friends how they were feeling or what they were doing, they shared a text update. Brands, on the other hand, went out of their way to share everything as a text update to improve their Reach. 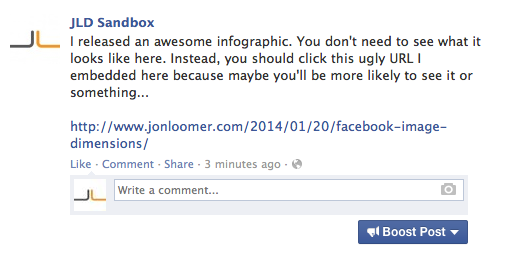 Brands destroyed the use of text updates. And Facebook needed to adjust their algorithm accordingly. Now we’re seeing that the Reach on text updates is down about 40%.

Of course, some brands took this to mean they should stop using text updates altogether. In other words, they just don’t get it…

2. Memes and Unnecessary Photos: Before text updates, sharing everything as a photo was the biggest craze.

Once again, the action of sharing a photo wasn’t the problem. It was brands going out of their way to share photos unnecessarily in order to artificially inflate Reach or engagement that was the core issue.

So we started seeing brands share everything as a photo. Photo boxes with nothing but text in them. Screen shots of blog posts with a URL pasted into the description. Endless cat photos and other memes. 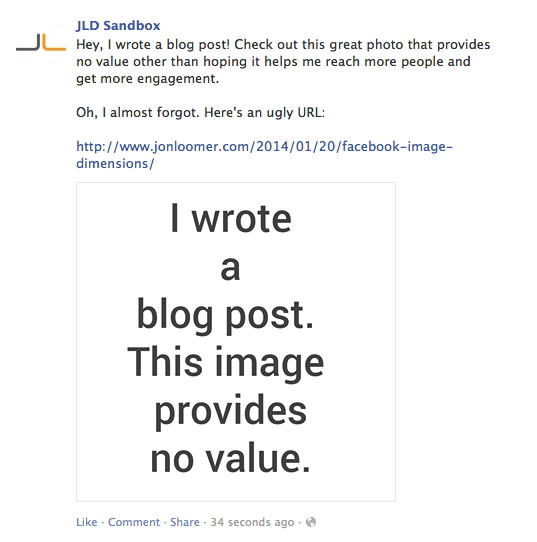 The goal here, in most cases, wasn’t to provide value. Brands were putting a metric ahead of their content. They assumed that any photo would get more Reach and engagement, and that no matter what it was users would prefer it as long as it was in the form of an image.

Of course, users don’t share everything as a photo. But brands were forcing the use of photos unnaturally, which completely screwed up the News Feed.

3. Lame CTAs: Study after study has been released indicating that if you want a desired action, you simply need to ask for it. Psychology and stuff.

I don’t completely disagree with this. I understand the power of calls to actionA call-to-action is a button or link on your ad that suggests the action you want your audience to take. Examples: "Learn More" or "Sign Up.". But I also know how annoying bad ones are.

Here’s the brand’s dilemma: Most Facebook users are on the network to engage with friends and family. People don’t talk like this. Only brands do. And when brands do, these posts stick out unnaturally.

But of course you want the engagement. You want the click. We just need to be far more creative — and more conscious of how users prefer to engage on Facebook.

4. Get Notifications: Back around the time brands found out that ONLY 16% of their fans were seeing a single post, the Get Notifications option was released that allowed users to subscribe to alerts whenever a brand published new content.

The result? Yeah, I’m sure you know what happened. Brands started sharing whiny posts that went a little something like this…

You aren’t seeing all of my posts! Facebook is keeping us from reaching 84% of you. YOU CAN GET AROUND THIS! Just click that drop-down thing and select Get Notifications so you never miss one of our updates EVER AGAIN!

Do you know how many people actually followed your instructions and decided to get notifications? Probably very, very few. Likely fewer than the number of people who unliked your page as a result.

It’s very rare that a brand will produce content that’s so good that I would be upset if I missed a single post. In fact, no brand exists for me.

5. Hashtags: Very few people use hashtags on Facebook. But when the feature was launched, do you know who used it more than anyone else? Brands.

And why do you think this was? No, it wasn’t because it added any value to the post. The only motivation was to reach more people than they do normally. Evil Facebook was keeping them from reaching all of their fans, so they might as well hijack some discussions through hashtags.

The result was posts cluttered with unnecessary hashtags. You’d rarely see this from users. But brands went nuts with it. 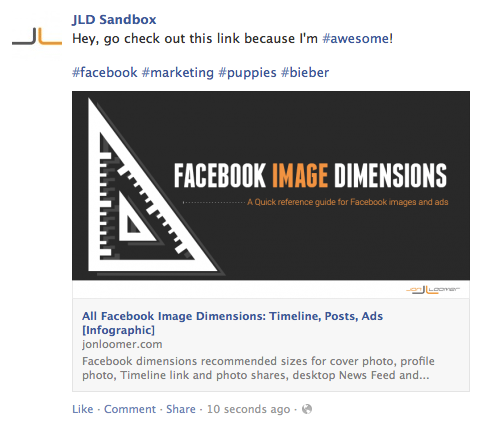 I won’t go so far as to say brands ruined the hashtag on Facebook. It never really got off the ground (at least so far). But they are certainly slowing the feature’s growth.

So now the latest shiny object that distracts brands is page tagging. 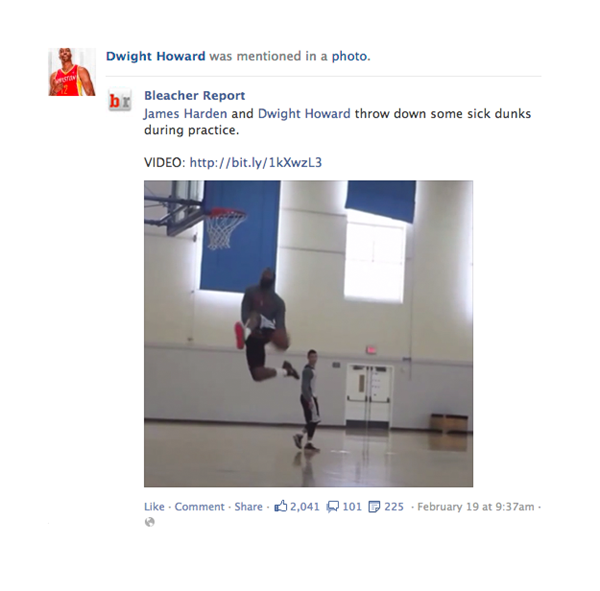 This is actually something I’ve seen in my News Feed for a while. It has worked quite well because it wasn’t public knowledge that this happened — or that brands could take advantage of it.

But now that the feature is official? I expect the worst.

Some will continue to use it for good. They’ll tag a page to provide attributionAn attribution window is the number of days between when a person viewed or clicked your Facebook ad and subsequently took an action. for a link they are sharing. This is the way it should be used.

But you can also expect to see brands randomly tagging big brands with the grand plans of reaching their larger audience. This will help those big brands, but it’s unlikely to move the needle at all for the small brands tagging them.

You see, Facebook’s learned their lesson. They know they can’t trust brands. So not every post that tags a brand you like will appear in your News Feed. Those posts will first need to be highly relevant to both audiences and receive a ton of engagement.

So I don’t expect this to be effective at all. But that hasn’t stopped brands from abusing features in the past, all in the name of the almighty Reach metric.

It’s Time We Learn Our Lesson

In the process of chasing Reach and putting a metric ahead of value, brands are becoming less and less interesting on Facebook. In fact, a recent survey suggests that 68% of users never or hardly ever pay attention to brand posts on Facebook.

Now, I’m the first to question results from surveys since they rarely reflect reality of actions. But I do believe there’s truth in this.

Brands complain that they don’t reach all of their fans with a single post. They do everything they can to game the system. They assume that a “like” is an opt-in and that users are furious if they don’t see every post.

But the reality is that most users just don’t care. And in fact, if you’re chasing Reach instead of focusing on providing valuable content that your target audience actually cares about, they probably care even less about you than the typical brand.

Users aren’t robots. They aren’t going to automatically engage with you or buy your stuff just because you used a text update or a photo or a hashtag or a tag or a CTA. If your marketing doesn’t work on Facebook, it may just be because you completely suck at it.

The Root of the Problem

If you think everyone who likes your page wants to see all of your content, you are part of the problem.

If you obsess over Reach and treat users as robots who will automatically engage if you post a particular way, you are part of the problem.

That doesn’t mean brands can’t be successful on Facebook. The complete opposite. But it separates the brands who get it from those who don’t.

If you want to reach users on Facebook, treat users as people. Understand what they like. Find out how you can make their lives better with your content. Act accordingly.

Am I off base here? Are bad marketers ruining the News Feed?