As the popularity of streaming video with Facebook Live continues to rise, new tools are being provided to marketers. One of the most exciting developments is the ability to stream webinars to pages and groups via Facebook Live.

Let’s take a closer look at what this means for you as a marketer and how you can start streaming webinars today.

Webinars are a great sales tool for marketers. They provide the ability to stream the host’s desktop, typically featuring a series of slides.

Traditionally, this has meant creating lead forms and landing pages that entice visitors to provide an email address to reserve a spot and attend at a planned time (there is evergreen webinar software as well that streams recordings around the clock, but I’m not going there).

I use free webinars to build my email list and also act as an introduction to my paid products. My training programs are built on a live webinar system. Finally, I conduct weekly webinars for my Power Hitters Club – Elite membership community.

There are several built-in advantages of using Facebook Live to stream your webinars.

1. No additional software for users.

This is a big deal. Some people hate adding software to their computers. GoToWebinar needs regular updates and can take a while to install.

Install aside, though, there are other issues involved with hosting webinars elsewhere. They rely on the user receiving email communication with a special link to attend the webinar. This is often an issue, whether it be those emails go to spam, they get buried, or the notifications get delayed.

It doesn’t get much easier for the user. They don’t need to provide an email address. Since 1.8 Billion users are on Facebook monthly, it’s not as if the typical person needs to change their behavior to view the webinar. It comes to them.

This is huge for the marketer. It tends to cost $1 or more to get a registrant for a typical webinar hosted elsewhere. And a small percentage of those people are expected to attend. For most marketers, this means a lot of work and money for a low turnout.

But on Facebook, there is much more potential for reaching a large number of people. Of course, it certainly helps that you have a built-in audience in place. But if you do, you start your webinar and it shows in users’ news feeds. And given Facebook’s emphasis on live video, they’re even likely to be notified when it starts.

I’ve found webinars conducted via Facebook Live to be much more social than the typical webinar. I can answer people verbally who comment. Others watching the video can also communicate with one another.

Even better, I can write replies after the webinar is over to add value to the comment thread when users view the replay.

Some webinar hosting software (like GoToWebinar) have maximums on the number of people who can attend a webinar at a time. You have to pay more for a higher threshold, going up to 1,000.

But with Facebook Live, you have no such restrictions. You could have 100 or 100,000 people watch your webinar.

Of course, there are also some potential disadvantages of using Facebook Live to host webinars.

I’ve used GoToWebinar for several years now, and I find it to be extremely dependable. I can’t say I know the technology well to explain it, but there tend to be very few issues of people being unable to view a webinar with that software.

I’ve streamed via Facebook Live since 2017, and I have seen more issues here. The quality of the audio and video relies heavily on the bandwidth and connectionWithin your ad set, you can further narrow targeting by adding a connection to a page, app, or event that you control. More speed of the user. And that can be frustrating for all involved.

2. No email address provided for marketers.

You may not get an email address up front, but there is something else you can do to follow up (I’ll get to that later).

This could be a major annoyance if you’re streaming to your Facebook page. The typical webinar is walled off. Those watching it want to be there. They jump through a lot of hoops to be there.

With Facebook Live, they may be seeing it because a friend is engaging with it. Or maybe they like a page that they follow very casually.

The troll comments can be a major disruption.

If you use GoToWebinar or another tool to host your webinars, you have quite a bit of control over design, privacy, and other settings. With Facebook Live, you are a bit naked.

5. Less attention. Your attendees to a Facebook Live webinar may not have meant to watch your video. They may have jumped in at the beginning, middle, or end. They may watch for a few seconds, get distracted, and move elsewhere in their feed. While you may have more volume, you’re much less likely to have high percentage attention.

6. No follow-up. Maybe you want to follow-up on a product related to your webinar. Or you want to notify those who missed your webinar live that they can watch the recording. Under the typical set-up with email registration, all of this is possible. Not with a Facebook Live webinar.

You can stream a webinar to your group or page straight from the Facebook interface.

First, click to create a live video from your publisher.

Click to “Schedule a Live Video” at the top left. 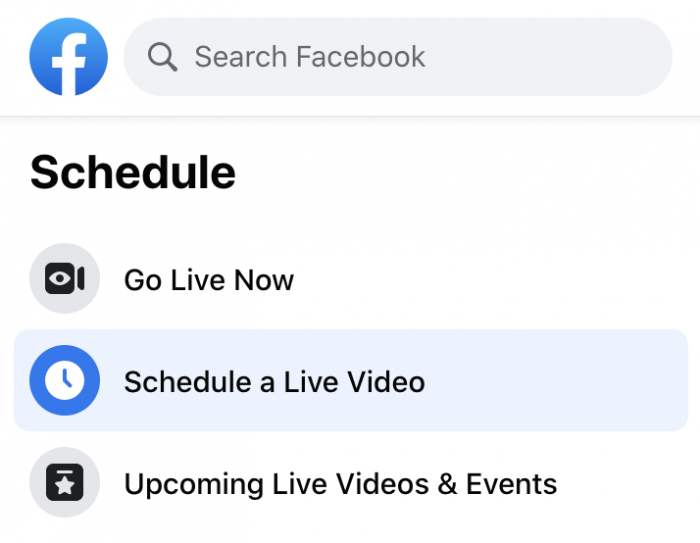 Choose a date and time…

Determine whether you’ll share to a page you manage, a group you’re in (doesn’t matter if you manage it), or your personal timeline. Then select the page or group you want too stream to.

Create a title and description for your webinar, then determine if you also want to crosspost to another page or group associated with this page (if there are any). 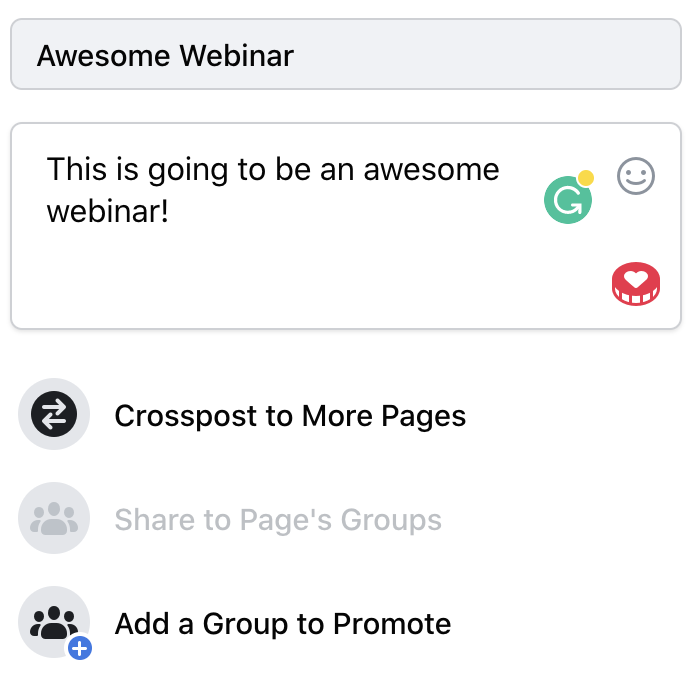 If you click “Audience Settings,” you can restrict the audience by age or location.

You can also add a thumbnail image. Otherwise, it will pull your cover photo. When you’re done, click “Schedule Live Video” at the bottom.

When it’s about time to start the webinar, go into the live video and select “Use Camera.” 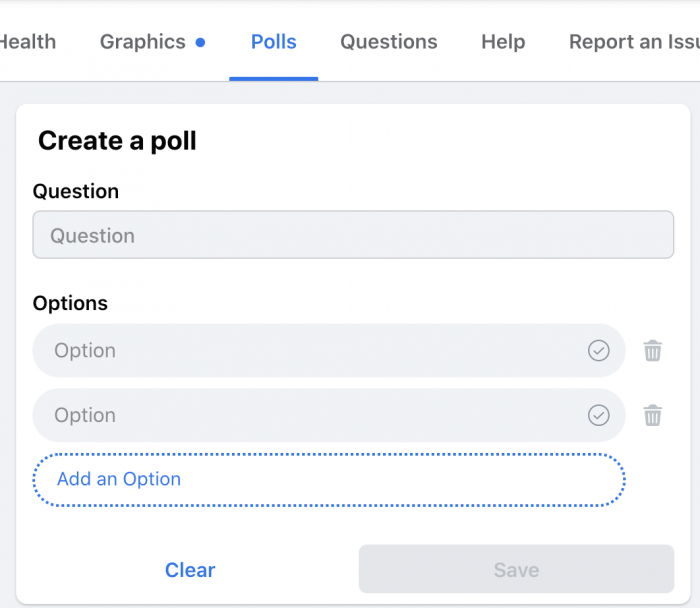 You can also add questions. 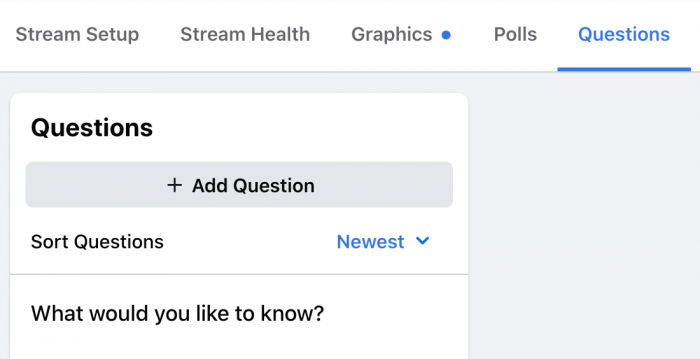 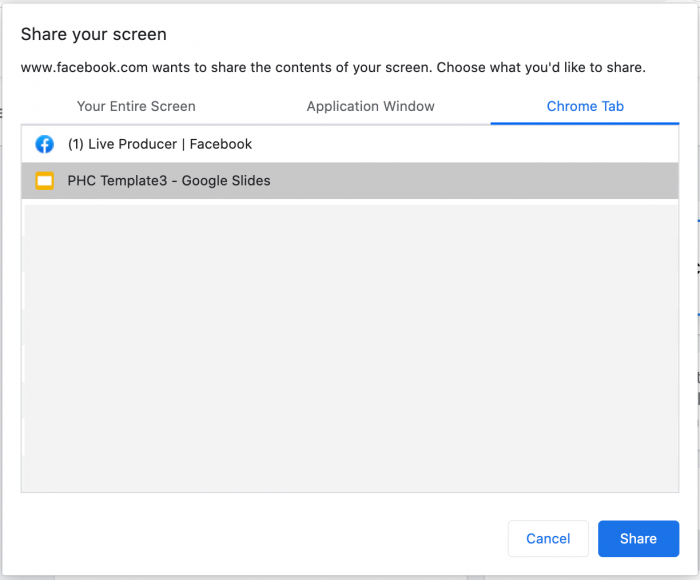 You can share your entire screen (not recommended), an application window (PowerPoint?), or Chrome Tab (Google Slides?).

Use a Third-Party Tool

You can also use a third-party tool to stream your webinars to Facebook. An advantage of this may be additional features that aren’t available natively.

Following are some of the tools I’ve used in the past:

Of these four, I’ve used ECamm Live the most for the purpose of streaming webinars (I’ve often used BeLive for live interviews).

If you’d like to learn more about how I use ECamm Live to stream webinars to Facebook, read this tutorial.

Having the ability to stream webinars to a private Facebook group has been a huge bonus for my business. In the past, I could expect that the turnout and participation in weekly webinars would be relatively low. It’s now multiplied.

When someone signs up to be a member of Power Hitters Club – Elite, membership already includes access to a private Facebook group. Previously, I had to set up automation with Zapier that would also register the member to GoToWebinar. But it was one more thing that could go wrong.

The greatest value of this membership is found within the community. Yet I found that maybe 80% of members actually joined the Facebook group. By forcing them to join the group to watch the webinars, members are more likely to see the value and not cancel early.

If you already have a private, closed community, using Facebook Live to stream webinars is a terrific option. However, I probably wouldn’t create a group for the sole purpose of streaming webinars.

This is something I’m considering (secretly planning). I tend to promote free webinars pretty heavily. But after that webinar runs, I may run a second airing on Facebook Live. This gives those who didn’t register a chance to see it — potentially leading to more sales.

3. Remarket to those who watched.

As mentioned earlier, a big drawback to hosting a webinar on your page or group via Facebook Live is that you don’t collect an email address. But thanks to Facebook’s awesome targeting options, you can create an audience of people who watched your video. 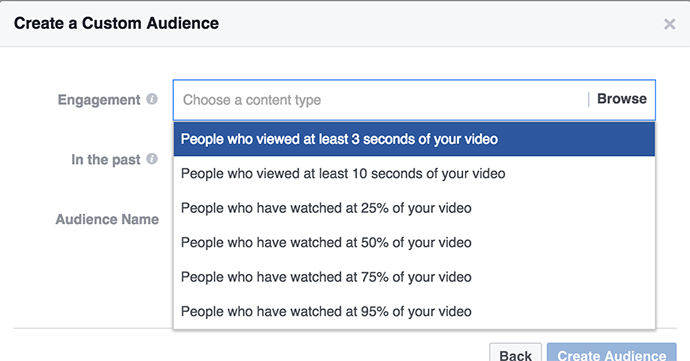 Create an audience of people who watched either a few seconds or a certain percentage of your webinar. That way, you can then target them to either sell them a product or collect the email address that you didn’t collect originally.

Have you experimented with airing webinars via Facebook Live? How are you doing it, and what do you think?