AuctionFacebook uses an ad auction to determine the best ad to show to a person at a given point in time. The winner of the auction is the ad with the highest total value, based on bid, estimated action rates, and ad quality. More Overlap, most often confused with “audience overlap” is a potential issue faced by Facebook advertisers, usually because they are targeting similar audiences in multiple ad setsAn ad set is a Facebook ads grouping where settings like targeting, scheduling, optimization, and placement are determined. More.

In this post, let’s discuss what Auction Overlap is, why and when it can be bad, how to detect it, and what to do about it.

What is Auction Overlap?

Auction Overlap is what happens when you have multiple ads that attempt to enter into the same auction.

Let’s assume you have two ad sets running at the same time, targeting similar audiences. When their ads are about to enter the auction, Facebook first chooses the ad with the highest total value. That ad will be the one that enters into the auction. The other won’t be considered.

Facebook does this to prevent you from bidding against yourself.

Auction Overlap isn’t necessarily bad. It’s the control that prevents you from bidding against yourself, which is good. You can’t avoid some Auction Overlap, no matter what you do — particularly if you run a lot of ads at once.

Auction Overlap can be bad if it consistently prevents one of your ads or ad sets from delivering.

If it happens repeatedly, you may struggle to get the number of events you need for your ad to be profitable. And Auction Overlap can prevent you from exiting the Learning Phase, which will make your ad set less stable and scalable.

How to Detect It

There are three primary tools available to detect Auction Overlap.

First, select an ad set and click the magnifying glass icon in Ads Manager to access the Inspect Tool.

There is some really helpful information in here. But at the bottom, let’s focus on the Auction Overlap section. 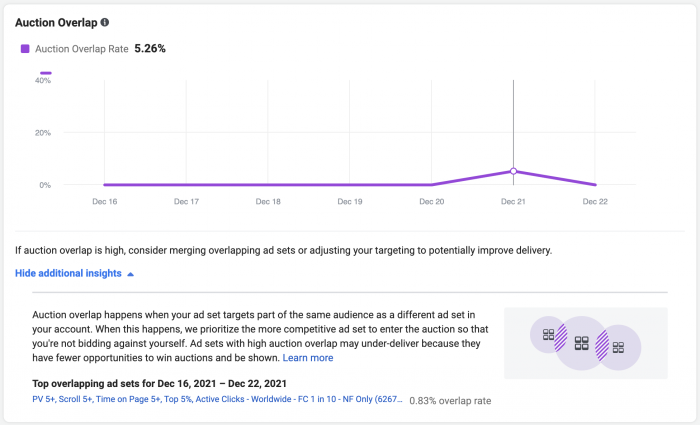 Here, you’ll see your Auction Overlap rate over time. If you expand for additional insights, you’ll see the ad sets that result in the overlap.

Another way is within Delivery Recommendations of the Account Overview section. The icon to access this section is at the top left side of your Ads Manager. 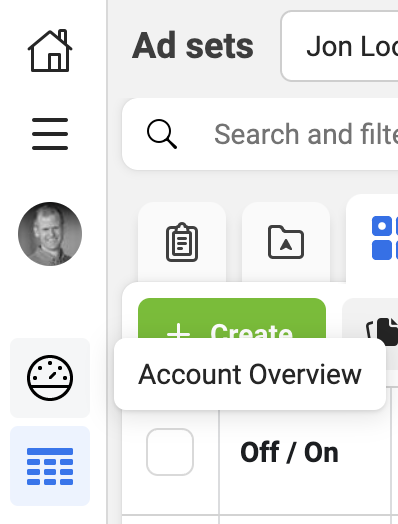 If Auction Overlap is an issue, Facebook will provide recommendations there.

Finally, you can create an Automated Rule for Auction Overlap. Click Rules within your ad sets. 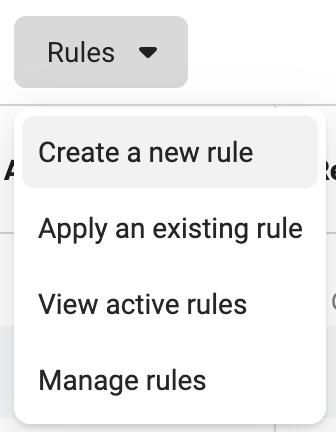 One of the options for automated rules is to “Reduce auction overlap.” 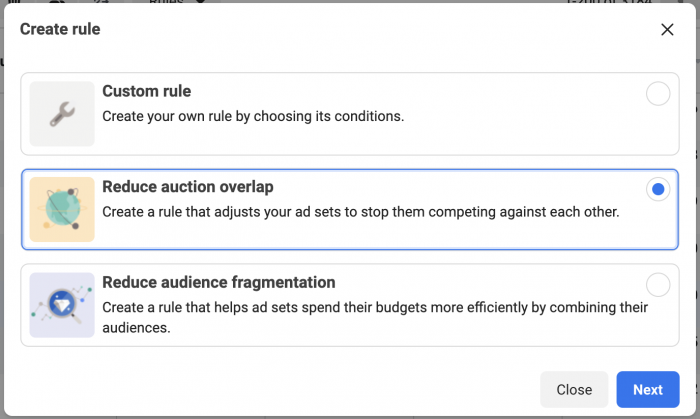 You can create a rule to automatically turn off overlapping ad sets or send a notification.

What Percentage is Too High?

There isn’t a threshold percentage at which you should be concerned. Instead, it’s a matter of whether your ad set is able to perform through the overlap. The overlap creates obstacles, but a large audience, large budgetA budget is an amount you're willing to spend on your Facebook campaigns or ad sets on a daily or lifetime basis. More, or high-performance rate would help you get through.

The main thing is to first detect it. Within the Inspect Tool, for example, get a sense of whether it’s increasing. Is that trend happening while performance drops?

Bottom line, it’s rather simple: If your ad is performing fine, don’t touch it. If it’s not performing and Auction Overlap appears to be contributing, we need to address it.

What Should You Do?

If Auction Overlap is a problem, there are two primary things you can do:

1. Stop the poorly performing ad set. In theory, this should help the other ad set(s) that were previously competing with it perform better.

2. Merge ad sets. Of course, this should only be done if the ad sets are promoting the same thing, presumably in the same campaignThe campaign is the foundation of your Facebook ad. This is where you'll set an advertising objective, which defines what you want your ad to achieve. More. But if the overlap is so great that you’re hindering performance, you may see improved performance by simply combining the audiences in the two ad sets.

How do you manage Auction Overlap?