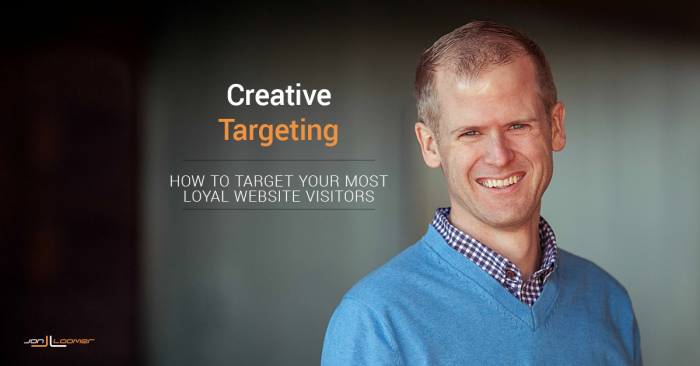 I love Website Custom Audiences. They allow me to target my website visitors — my most engaged audience — with content crafted to them based on their behavior. It’s my primary targeting method these days.

As great as WCAs are, they aren’t perfect. I’m left disappointed that Facebook doesn’t allow marketers to do more refined targeting to focus on those who are most engaged.

That said, we can get creative. This is a story of how I took a need and created my own solution using Website Custom AudiencesA website custom audience matches people who visit your website with people on Facebook. You can then create ads to show to that audience..

The Need: Target By Visit FrequencyCalculated as (Impressions/Reach), Frequency is a Facebook ads metric that measures the average number of times users have seen your ad.

When you create Website Custom Audiences, you can do all sorts of awesome things:

This is all great. And really, it may be getting a bit greedy to ask for more. But allow me to be greedy.

I want to isolate my most valuable website visitors. I can do that by targeting anyone who visited my website. I can target people who visited a thank you page for a purchase or opt-in. But we’re not left with much else.

I want to target people who have visited my website most frequently!

Let’s say, for example, that we don’t care whether someone has purchased or opted in at this point. We just want to focus on those who visit our website day after day after day. We want Facebook to consider a “frequency” variable.

But this isn’t really possible — at least not in a simple way. When we target a Website Custom Audience, we’re reaching people who have visited 10 times, but we’re also targeting those who visited only once. Wouldn’t it be great to separate the two?

That is the question I was asking. And until Facebook comes up with an answer, I was determined to tape together a temporary solution.

[Tweet “Ever wanted to target your most loyal website visitors? Here’s a possibly insane way to do it…”]

How to Target Frequent Visitors

To be clear, I want to isolate those who have been to my site multiple times. And in a perfect world, I want people who haven’t recently discovered my content, but have been back during a series of months.

There is a way to do this — particularly for bloggers. But it depends on your website’s URL structure.

Look at the URL of this blog post. After the domain, you’ll notice the year and month followed by the keywords of this post. It occurred to me that I could take advantage of the otherwise seemingly pointless presence of the date in my URL. 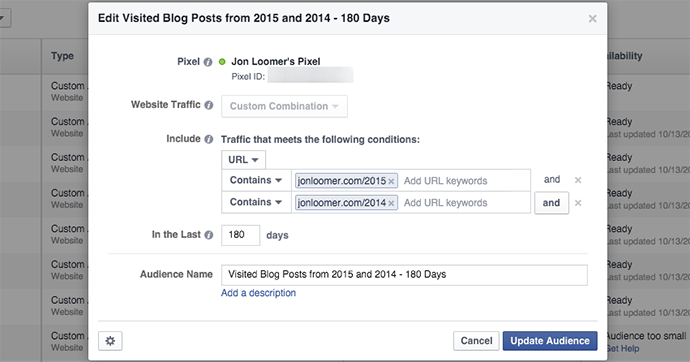 I used the “Custom Combination” option and included both “jonloomer.com/2015” and “jonloomer.com/2014.” My pixel is on multiple sites, so it’s important that I include the domain (otherwise that wouldn’t be necessary). This WCA would then build a list of all of those who visited blog posts with both the 2014 and 2015 year stamps during the past 180 days.

This is a start. But there is a significant weakness in this approach.

Since the longest possible duration is 180 days, it only captures those who visited blog posts from both 2014 and 2015 during the past six months. But someone might visit multiple blog posts that were all from 2015, and they would not fall into this audience.

As of this moment, the audience I created includes about 1,500 people. That’s good! But I know I’m leaving people out.

I could do the same thing, but with months. Of course, there are a ton of options now. Way too many options. You’d have to be a glutton for punishment to try to attack them all.

I’m just that kind of guy…

We’d again need to create a Website Custom Audience and choose the “Custom Combination” option. But this times, we’d need to focus on the months.

Here are all of the options for October, 2015 alone…

We haven’t even gotten to November and December yet, but we should plan ahead and include those, too!

Now repeat that same process for every month. It will take you lots of time. If you’re like me, this only challenges you more. It’s kinda fun!

The truth is I debated whether I should show you the final product because it makes me look a tad insane. But I decided… so what? So here it is…

As ridiculous as this screen shot may be, it is also incomplete. It doesn’t consider prior or future years. But I’m ready to stop here!

This second audience is 2,800 people. Combining the previous audience we created (and eliminating overlap), we now have an audience of repeat visitors of 4,000 people.

Like I said, this remains imperfect. It doesn’t account for people who visited multiple posts in the same month. It only accounts for the current 180 day window. But it’s a great start!

Targeting My Most Loyal Readers

You can’t spend a couple of hours uncovering your most loyal readers in a Website Custom Audience and stop there, of course. I wanted to target them!

I created the following ad… 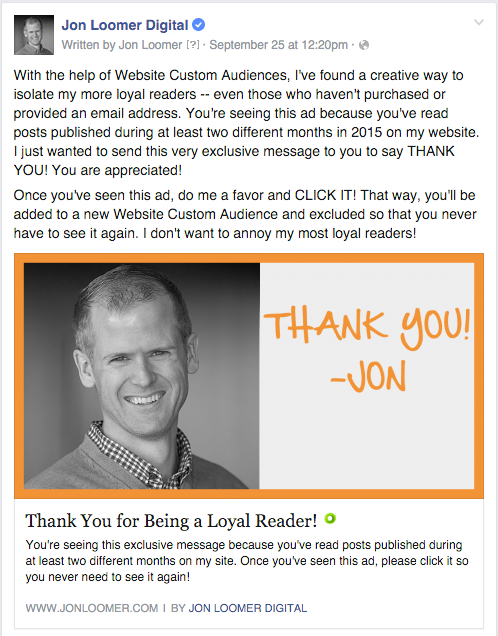 I know what you’re thinking. A lot of people have said it: You’re running an ad just to say thank you? But you provided some sort of up-sell, right?

At this point, there was no catch. I only thanked them.

What was the response? 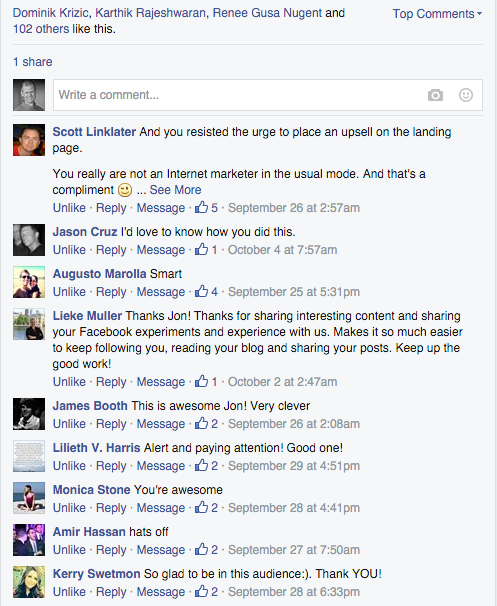 I’d say that they dug it! In fact, the first response reinforced that my decision not to sell anything was the right one.

As you can see in the copy, I’m also conscious of the potential to annoy these people, so I created a WCA for a unique link. Once these people click that link, they’ll be added to that WCA and be excluded from targeting.

That final WCA acts as yet another qualifier. The first two audiences (two years and two months) isolated my most frequent visitors. But those who clicked the link then separated themselves further. Very likely an extremely valuable audience!

Let me reiterate: I didn’t run this campaignThe campaign is the foundation of your Facebook ad. This is where you'll set an advertising objective, which defines what you want your ad to achieve. to sell anything.

However, I’m always curious if people will buy something anyway. So when I created this campaign, I made sure to track conversions.

The result? I know that I sold two annual memberships to the Power Hitters Club. Since this is during a promotion where that price is $594, I made $1,188 by running a campaign with no expectations of selling anything.

This campaign is still running as I publish this post. So feel free to visit blog posts from multiple months and see if I target you!

We Can Be Better

This is an example of looking beyond the templates and blueprints to do things in unique ways. I challenge you to do your own digging.

As marketers, we need to be better. Look for ways to improve your ability to send a positive message to people who will embrace it. Far too often, I see marketers instead choosing to look for ways to take shortcuts or game the system.

Marketers are too often seen as salespeople. And unfortunately, the image is most frequently closer to a used car salesman than an innovator or inventor.

Look for ways that marketing can be improved. Be inspired by ways that you can be part of the solution.

Is this a viable way to target your most loyal readers? What other ways could you solve advertising problems in creative ways?