Facebook announced several changes to Facebook ad metrics that will impact the results advertisers see and how they see them.

In an attempt that Facebook says improves transparency, certain metrics will be labeled as “estimated” or “in development.” You’ll find these labels within tooltips that provide more information.

Facebook says that estimated metrics are “calculated based on sampling or modeling,” and are therefore “hard to precisely quantify.”

Facebook uses Reach, the most famous (or infamous?) Facebook metric among marketers, as an example for explaining estimated calculations.

I’ve always considered Reach an inexact, low priority metric. This is the first time, however, I’ve seen Facebook describe it as being an estimate. 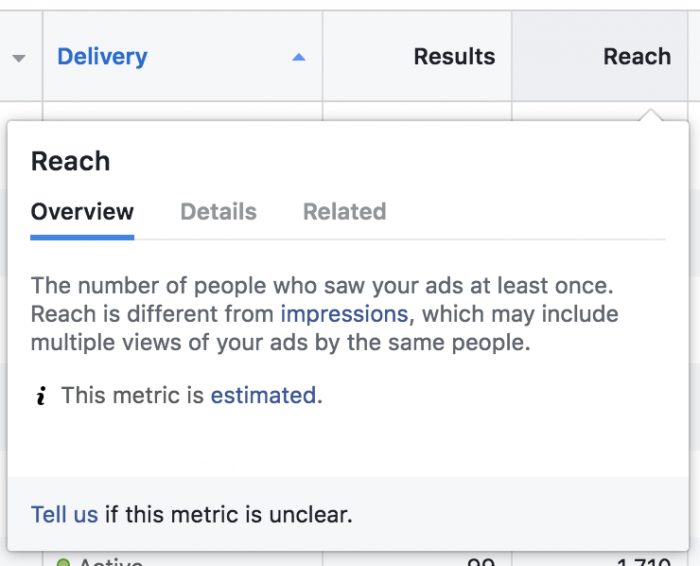 There is a LONG list of estimated metrics. See the entire list here. But following are a few highlights:

To clarify: Being “estimated” doesn’t mean that a metric is wrong and can’t be trusted. Instead, I’d simply see these metrics as those that add to the story and provide context but are lower on the priority list.

There are also several newer metrics that Facebook says they are testing and are therefore labeled as “in development.” Since these metrics are new and in the process of being tested, they may still change. 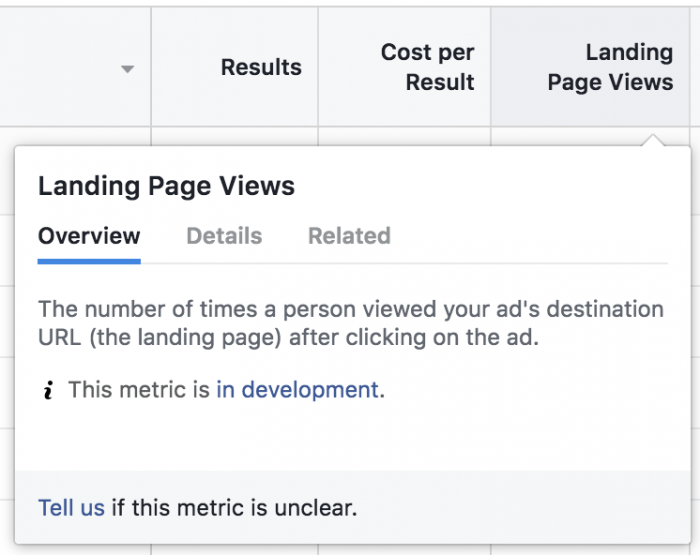 For example, estimated ad recall lift is a metric used by brands to understand the differences between people who can recall a brand after seeing an ad compared to those who have not seen an ad. This kind of automated measurement is still new and requires both polling and machine learning. Because we use sampling to determine this metric, it will be labeled as estimated, and since we’re still gathering advertiser feedback on it, it will also be labeled as in development.

The metrics currently in development are as follows:

Similar to the “estimated” metrics, understand that these metrics are being tested and may be imperfect.

In July, Facebook will be removing several metrics (19 by my count) that they feel are redundant, outdated, or rarely used. Interestingly, six of these metrics are those that were also labeled as “estimated.”

The following metrics are those Facebook plans to remove (metrics in bold are those that are also estimated):

Facebook explains why they are removing each of these metrics and also provides recommendations for what you can use instead in this post. Following are the groups of metrics being removed and what Facebook recommends using instead…

Instead of Actions, People Taking Action, Cost per Any Action: Customize your own composite metric reflecting actions that are meaningful to your business.

Instead of Link Click Destination: Outbound ClicksOutbound clicks measure the number of clicks on ads that take people to properties away from Facebook. and Landing Page Views.

Do you see think these are positive changes? Any metrics that you don’t want to see go away?