Now that I’m putting a greater focus on Reels and short-form video, the next step is figuring out how to leverage this engagement with ads. I want to target the people who are most engaged with my Reels, both on Facebook and Instagram.

It’s clear that these videos are making an impact, even though they don’t drive traffic to my website. I’m getting better engagement than I’ve seen on Facebook and Instagram in years.

But, most importantly, I keep hearing from people who are seeing my content again. They had stopped seeing my stuff, even though I kept sharing links that went into the abyss. Many of the consumers who fall into this group are now buying from me.

I don’t want to target all people who are engaging with my posts. That’s just too broad. This can be done with both my Facebook page and Instagram account.

No, I want to focus on my videos. So, let’s use the Video Views Custom Audiences.

I’ll want to focus on those who watched the entire video (or at least 95%).

But, the immediate problem is that we need to select at least one video. So, we could go through and select all of my recent Facebook videos from the past couple of months… 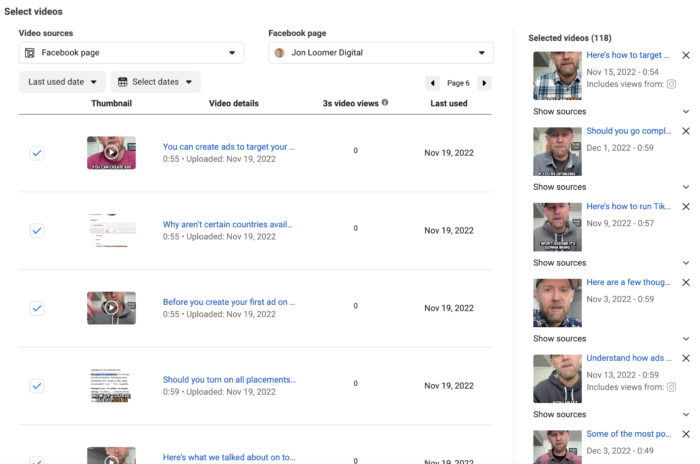 Side note: It’s an obvious bug that all of my Facebook videos show they have 0 3-second views.

You’ll also want to select all of your Instagram videos… 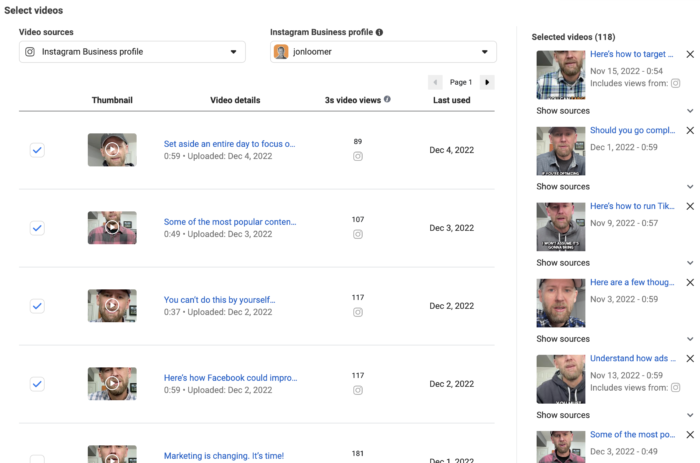 The result is 118 videos, which may be a bit overkill.

I’ve decided that I want to focus on recency since I can’t isolate people who watch the most of these videos. Otherwise, someone who watched one video could be targeted perpetually.

Unfortunately, I’ll also need to update this audience every time I create a new video. Not ideal, but the lengths I’ll go to create good targeting.

How to Leverage this Group

There’s obviously plenty we can do with this. I could promote products and opt-ins. But for now, let’s just make sure we can reach these people.

So, I created a video indicating that if you’re seeing it, I have a feeling you’re my people. You’re someone who is watching my Reels to completion, and that seems to be a good indicator. 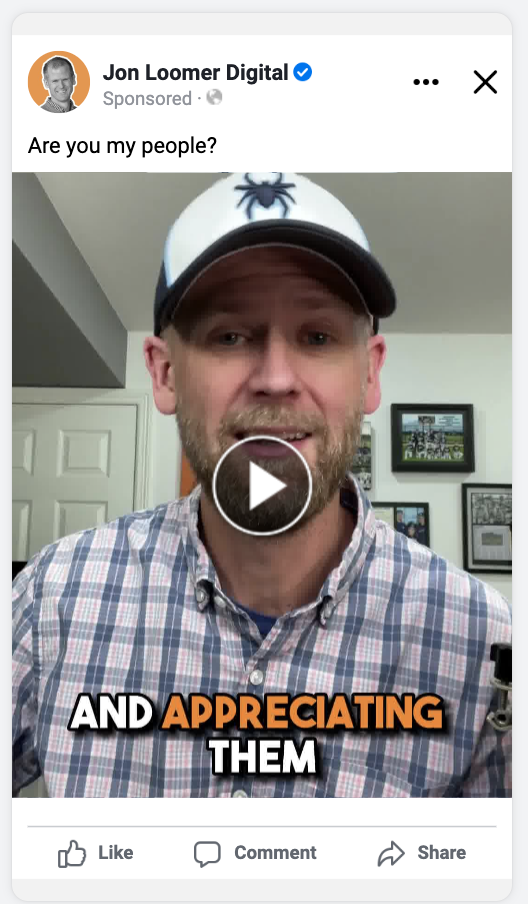 Since this is a small group (under 1,000 people), I’m using an Awareness campaignThe campaign is the foundation of your Facebook ad. This is where you'll set an advertising objective, which defines what you want your ad to achieve. More optimized for Reach. 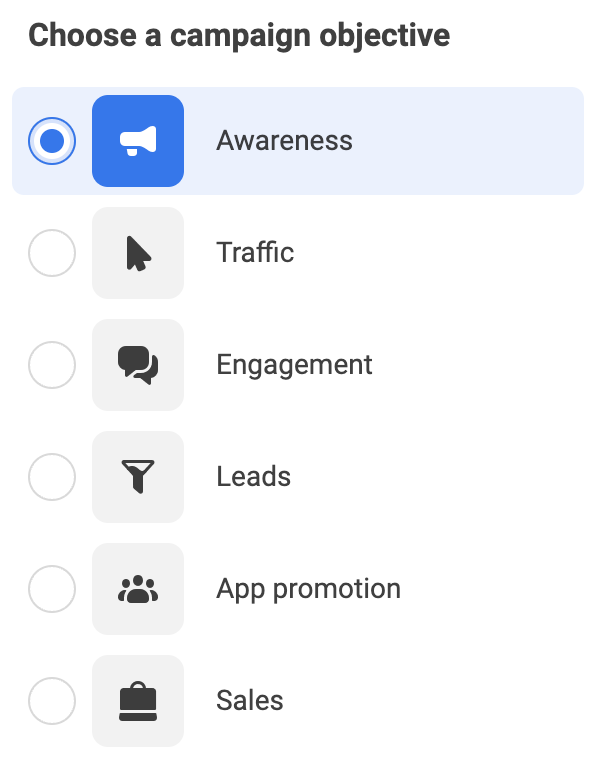 And since it’s a small but relevant group, I’m using worldwide targeting. You can do this by simply removing any targeting from the location field.

I’m targeting the custom audience we just created. But I’m also excluding anyone who watched the video that I’m promoting in this ad. I created that audience after this campaign was published, then updated the targeting in the ad setAn ad set is a Facebook ads grouping where settings like targeting, scheduling, optimization, and placement are determined. More. 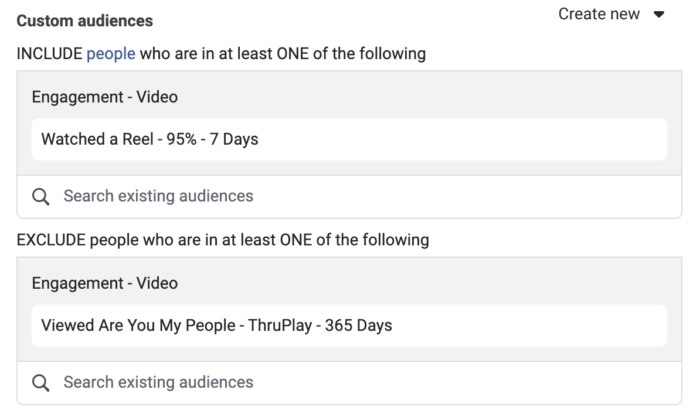 And I’m sticking with the default of 1 impression every 7 days.

The reason for that is I may keep this campaign running a while, and I don’t need to keep showing the same people the ad all the time. The exclusion helps prevent that, but this control helps as well.

Am I Reaching People?

Yeah, I am. Since I started this campaign on Thursday, I’ve reached a grand total of 147 people.

Not a lot, but these are important people. And due to the frequency capFrequency capping allows you to limit the number of times your audience sees your ad during a given window of time. More, that size has shrunk pretty fast. I only reached 9 people yesterday and 13 so far today. But, the main thing is that it’s still running.

If delivery becomes an issue, I may need to update the frequencyCalculated as (Impressions/Reach), Frequency is a Facebook ads metric that measures the average number of times users have seen your ad. More cap to something like 1 impression in every 3 days. But, we’ll worry about that if and when we need to.

One of the nice things is that it’s incredibly cheap to reach this very relevant group. I’ve only spent about $5 so far to run this campaign.

If I were to leverage this audience for something like list building or selling products, it has the potential to be very efficient.

What Could Have Been Better?

It’s fun to experiment with this, but the truth is that this isn’t my preferred approach. Two reasons.

1. Why can’t I target anyone who watched any Reel or video during the past 7 days?

I went to a lot of effort to create this audience based on people who could have watched any of my Reels. Even if I wanted to only focus on the most recent videos, I’d still need to keep updating the videos included as I publish new ones.

That’s far from ideal. Why isn’t there an option to isolate engagement with all videos at 95% during a specific period of time?

2. Why can’t I target people who watched at least 3 Reels during the past two months?

A frequency element would be amazing. That way, we could widen the net and include videos over a longer period of time. But without frequency, a person who watched one video two months ago (when I publish videos every day) isn’t as valuable as someone who watched one recently. 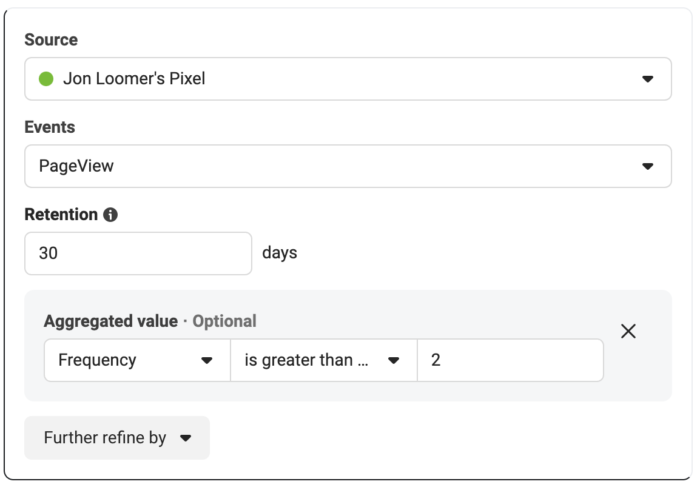 I created a video on this, too (because of course I did!). Check it out…

If you publish a lot of videos now, this may be a good approach for you. What do you think?