If you’ve been creating videos for Facebook and Instagram Reels, you can increase your reach with ads.

This is a format I’ve been experimenting with extensively of late. Why? Well, Meta has been very clear that Reels are getting priority for distribution. This is their answer to TikTok. They want users to watch them.

Because of that known priority, this can be an advantage for marketers — both organically and with ads. In theory, you should get better distribution with a well-done Reel than you would a link or image post. And if you get increased engagement, that often leads to lower CPMCPM measures the cost per 1,000 impressions. It's a good metric to evaluate competition level and costs to reach your audience. costs in ad spend.

Let’s dig into how you might take advantage of the Reels format with ads.

First, it’s important to understand what we’re dealing with.

Reels are short-form videos (up to 60 seconds on Facebook and 90 seconds on Instagram) that are typically recorded from a phone. As a result, Reels utilize the 9:16 aspect ratio.

Here’s a visual example of a Reel I’ve published… 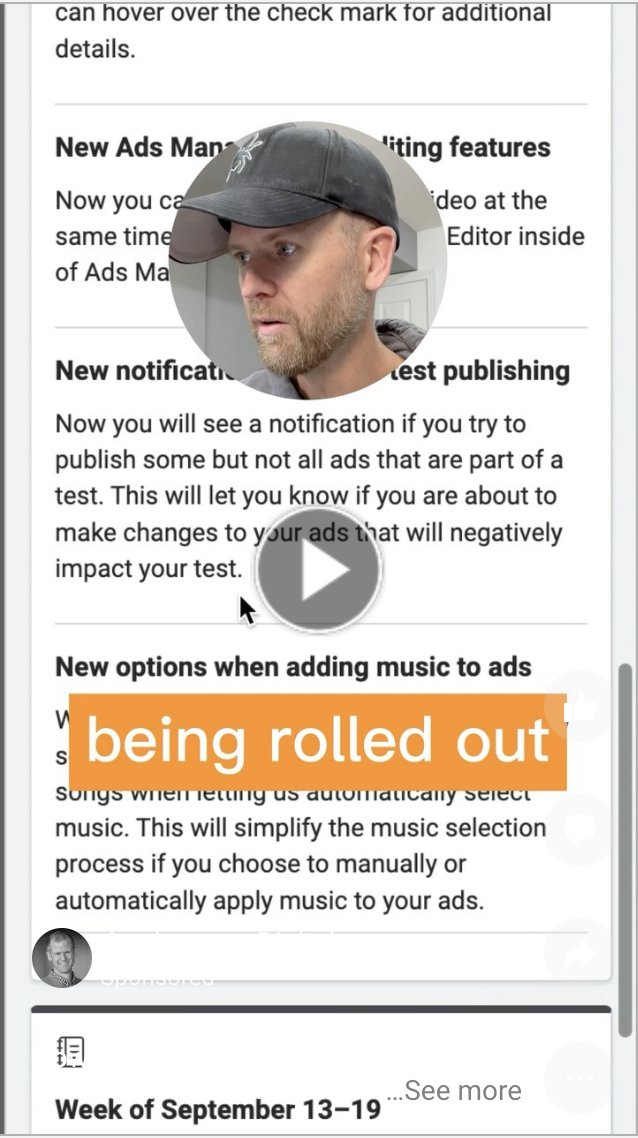 The objective isn’t particularly relevant here. You could theoretically use several different objectivesThe campaign objective is the ultimate goal for your Facebook ad. Your selection will impact options, including optimization and delivery., assuming your ad could lead to the desired outcome.

The only requirement for this tutorial is that we promote an existing post.

We’re going to jump ahead to the ad for a minute.

If you are publishing your Reels on Instagram and cross-posting to your Facebook page (you probably should be!), toggle to Instagram at the top and select the Reel that you want to promote. 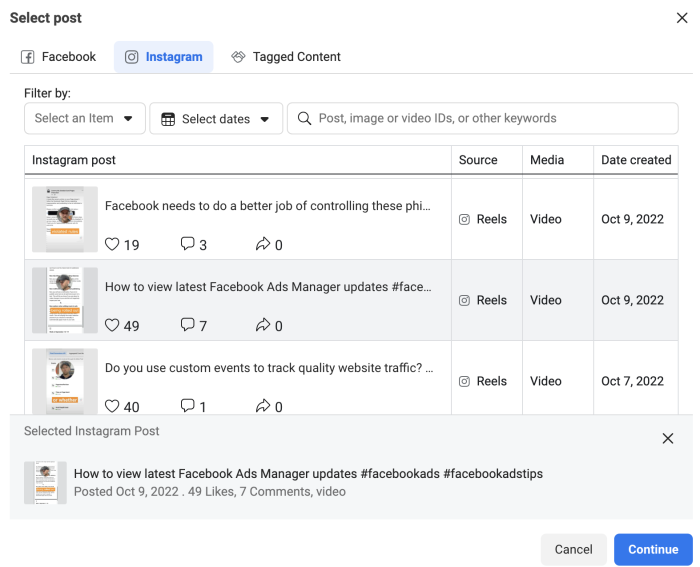 You should select a Reel that is under a minute long so that it stays within the requirements for both Facebook and Instagram (yes, it would make a lot of sense if the rules were the same for each platform).

Okay, now let’s go back to the ad setAn ad set is a Facebook ads grouping where settings like targeting, scheduling, optimization, and placement are determined. to choose placements (let’s manually select them instead of using all).

What you do here is up to you, but I’d recommend making the most of the 9:16 aspect ratio. First, you’ll probably want to keep all Stories and Reels placements selected since they are all 9:16.

If you want to select the Overlay and Post-Loop Ads on Reels placements, you also have to select Facebook In-Stream.

This is unfortunate since In-Stream uses a 16:9 aspect ratio. So, you can either roll the dice here or keep Overlay and Post-Loop unchecked. 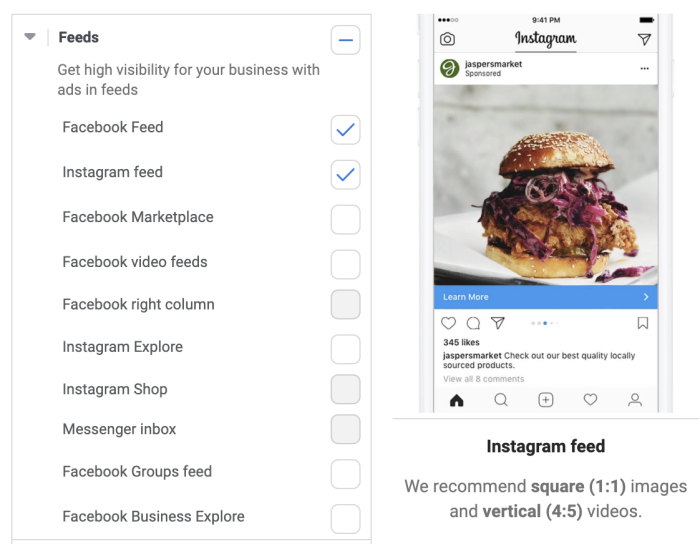 Whether you do anything else here is up to you. But, if you want to make sure your ads look good, let’s adjust creative by placement. Go back to your ad. Click to edit by placement.

Something that I like to do is edit the thumbnail. 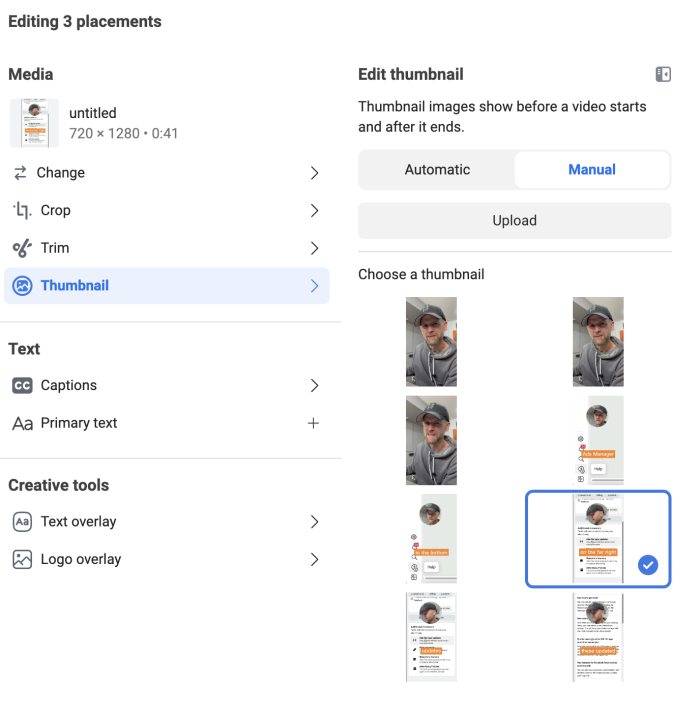 If you really want to get detailed, you could exclude people who already watched your Reel. You’d do that by creating a custom audience based on video views. 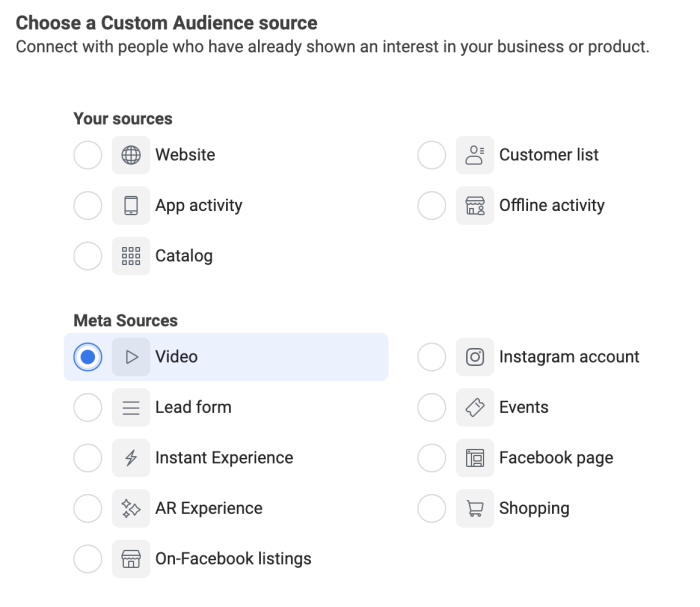 What you use for view length is up to you. If you use 3 seconds, that should immediately exclude anyone who saw the video due to auto-play. Or, you could go all the way to 95%. I won’t argue with either approach.

When you choose the video, you can select multiple videos at once. So, if there are versions on both your Facebook page and Instagram profiles, I’d select them both.

Because I’m creating a lot of Reels right now, I’m actually trying something out with a very narrow audience. Honestly, I have fun with the super narrow audiences — it doesn’t mean that you shouldn’t go broad. But, this makes it easier for me to have a small, controlled experimented with a limited budgetA budget is an amount you're willing to spend on your Facebook campaigns or ad sets on a daily or lifetime basis..

I’m using a Reach campaignThe campaign is the foundation of your Facebook ad. This is where you'll set an advertising objective, which defines what you want your ad to achieve. with a 3:1 frequency capFrequency capping allows you to limit the number of times your audience sees your ad during a given window of time..

The reason it’s so aggressive on the frequencyCalculated as (Impressions/Reach), Frequency is a Facebook ads metric that measures the average number of times users have seen your ad. cap is that people are likely to see my ads for up to seven days. The reason for that is I’m targeting my most engaged audience during the past seven days. 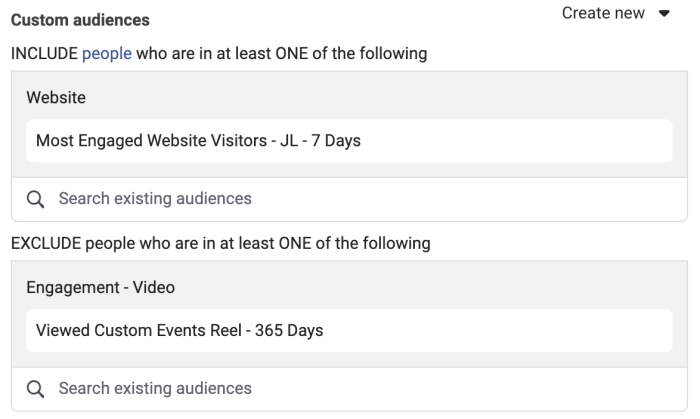 Of course, I’m excluding those who already watched the video.

If you’re curious, my “most engaged audience” is defined by people who performed a series of custom events on my website during the past seven days. That includes any of the following:

The result is an audience that Facebook says is about 2,000 people. I’m using only a $5 per day budget, which Facebook says will result in reaching 153 to 443 people per day.

Have you experimented with Reels yet? Are you promoting them with ads?