You can pin important campaignsThe campaign is the foundation of your Facebook ad. This is where you'll set an advertising objective, which defines what you want your ad to achieve. More, ad setsAn ad set is a Facebook ads grouping where settings like targeting, scheduling, optimization, and placement are determined. More, and ads in Facebook Ads Manager. Sometimes the simplest tools are the most helpful.

Here’s how it works…

It doesn’t matter whether you’re viewing campaigns, ad sets, or ads within Ads Manager. But my example will be using campaigns.

Hover over the name of the campaign. Then you’ll get options for View Charts, Edit, Duplicate, and Pin.

Once you pin a campaign, it will move to the top. It will also display a blue pin icon, regardless of whether you are hovering over the name.

You can pin multiple campaigns. As far as I can tell, there’s no limit to the number of campaigns you can pin. 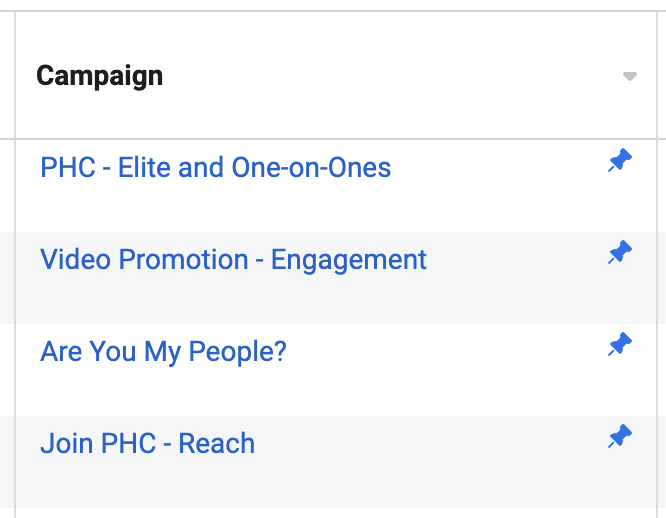 If you want to unpin a campaign, simply hover over the name of a pinned campaign and click “Unpin.”

Why Would You Use This?

This is a really good organizational tool.

Let’s assume that you’re running a whole bunch of campaigns, ad sets, or ads. This may apply most to ads since you’re more likely to have a lot of ads running than campaigns.

Undoubtedly, there are specific assets you care about most and that you want to watch most closely. Pin them. No more scrolling or filtering. Always at the top.

Speaking of filtering, the pins hold when you filter, too. So, if you filter by objectiveThe campaign objective is the ultimate goal for your Facebook ad. Your selection will impact options, including optimization and delivery. More, for example, the campaigns that you pinned of that objective will appear at the top.

It’s new to me. Whether it’s been there and I’ve overlooked it or it just showed up in my Ads Manager, I can’t tell you for sure. What I do know is that everyone I’ve shown it to within my community so far hasn’t seen it before.

Of course, someone commented on a video I created that they’ve had this for a year. Is that true? Maybe. It’s also possible it’s something that was originally tested and then slowly rolled out.

It really doesn’t matter, though. It’s a good feature, and you should know about it!

And here’s a video I created about this feature…

If you haven’t followed me yet on TikTok, do that now!

Have you been pinning campaigns? Will you? What do you think?