Meta has rolled out an update to ads metrics that you may have spotted in Ads Manager: Accounts Center Account.

It looks like a typo, but it’s a thing.

Let’s take a closer look at what this is and where you’ll see it.

On January 19, Meta announced that they were updating terminology to align with Accounts Center. They would replace “People” with “Accounts Center Accounts.”

Wherever you’d see “people” — in a metric name or metric definition — you will now see Accounts Center Account.

No new metrics. The calculation of metrics isn’t changing either. The only difference is the name.

In that case, one Accounts Center Account represents both profiles. You’ll see where that matters next.

You may notice what looks like a new metric called Cost Per 1,000 Accounts Center Accounts Reached.

This is simply Cost Per 1,000 People Reached, but renamed.

As mentioned, nothing changes but the name. It was already the case that the number of people reached was across profiles, assuming they were linked. This provides clarity for the exception when those accounts are not linked.

You may notice other times when Accounts Center Accounts is used in metric definitions. There are likely more, but here are a couple that I spotted.

REACH is now defined as “the number of Accounts Center accounts that saw your ads at least once.” 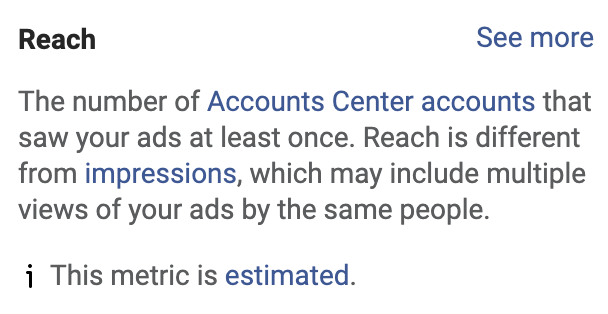 Wherever you would have previously seen “People,” you will now see “Accounts Center Accounts.”

I also recorded a quick video on this. Watch it here…

Had you spotted this change?