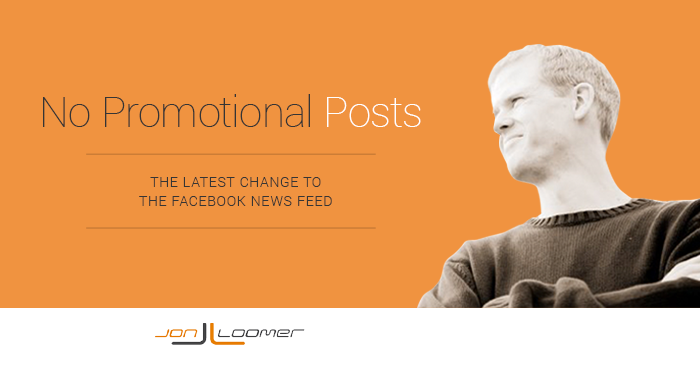 Facebook dropped a bombshell recently when they announced a change that will impact prominence of particular types of self-promotional organic content from pages.

What does it mean? How does the change impact marketers? Are we all screwed?

[Tweet “Facebook is going to penalize promotional organic posts from brands. Here’s what you need to know…”]

As part of an ongoing survey we asked hundreds of thousands of people how they feel about the content in their News Feeds. People told us they wanted to see more stories from friends and Pages they care about, and less promotional content.

As you know, the typical user could see around 1,500 stories in a given day. Facebook narrows that down to about 300 of the stories they believe the user will be most likely to care about.

After listening to this user feedback, Facebook believes that users don’t want to see this promotional content. As a result, less of it will be appearing within the news feed.

First, note that this applies to organic content only, not ads. Facebook defines any of the following as being promotional: 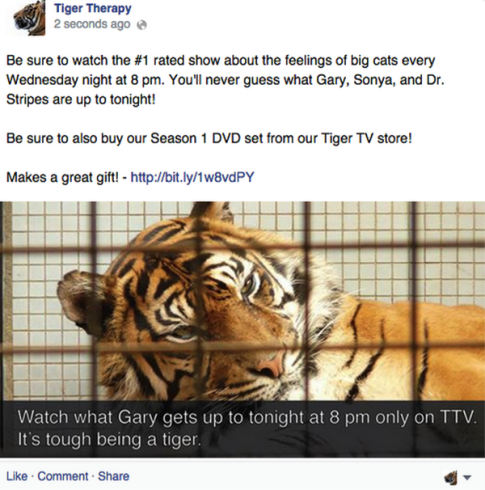 It is my assumption that, based on their definition of “promotional,” this post would have been fine if Tiger Therapy hadn’t pushed for the DVD sale. Of course, they are otherwise promoting a TV show, but that still appears to be okay at this point. 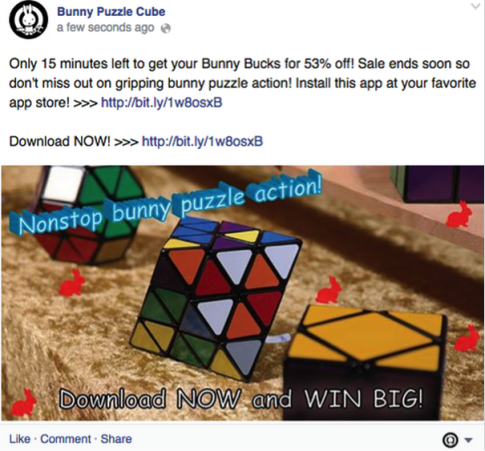 In this case, Bunny Puzzle Cube’s only goal is to sell their product and get the user to install their app. Clearly promotional, and the type of post that Facebook says users want to see less of.

Facebook makes plenty of rules and changes to the news feed that impact brand content distribution. It seems that many brands still violate these rules and somehow continue to get their content seen (not that it’s something I would recommend).

However, Facebook is clear that brands that choose to post promotional content “should expect their organic distribution to fall significantly over time.” That’s some strong language there, my friend.

Facebook isn’t messing around with this. Take this warning seriously or expect to face the consequences.

Even so, Facebook claims that while the brands that post “a lot” of promotional content will take a big hit to distribution, “the majority of Pages will not be impacted by this change.” I find this interesting because it seems to me that most brands post promotional content.

It also sounds like sweepstakes contests may be okay as long as they offer “context.” Facebook is vague about what this means. Maybe if contests aren’t relevant to a brand’s product or services, that’s a bad thing? Tough to say.

Finally, it looks like the content of your post can’t be the same as an ad. Again, there is a lack of clarity here, but I have an idea of where this would come into play.

You could create an ad that has the same copy as a post, but that may be okay if the copy wasn’t promotional. An example might be promoting a post to drive website traffic.

But a strategy that some marketers use centers around unpublished posts. They’ll run an ad promoting that unpublished post until it gets a lot of comments, likes and shares. And then they’ll publish it.

My guess is that while that post would have usually received a head start in engagement, that may no longer be the case. Particularly if that post was promotional.

It’s coming, so while this news certainly comes at a bad time — when brands are wanting to boost sales during the holiday season — it would be a good idea to keep the future of your page in mind here.

First, let me say that while I tend to agree with Facebook on almost all news feed related changes, there is a debate to be had here. We’ll get to that in a moment.

But let’s focus on the good: This and some of the other recent changes made to news feed distribution will force marketers to be better.

They’ll have no choice but to be interesting, to educate or entertain. They can’t just sell all day long…

As an accidental marketer who is not always proud of our industry, I can honestly say that I hate the vast majority of brand content on Facebook. Not all of it, of course, but much of it is crap.

Your promotional story is trying to fit in with countless personal stories from friends and family members. Unless you take a human approach — unless you post something that you’d actually want to engage with as a user — it’s really not worth posting.

So I think this is good in that it not only challenges us to be better at what we do, but it will separate those who do from those who don’t.

Marketers often roll their eyes at statements like this one from Facebook, but while they certainly need to make money there is also a lot of truth to it. Facebook needs to cater to the user.

They need to make it the best possible experience for them. They need to know what will result in more engagement and time on site and act accordingly.

While Facebook answers to stockholders, these investors also understand that the platform loses value if users abandon it or spend less time on the site. More users and more time on site means more data and more powerful ways to target advertising.

If users don’t come first, the value of advertising plummets. Advertisers will spend less money on those ads and Facebook’s investors would not be happy.

At the moment, there is no more powerful way to reach your target audience through advertising, and the reason for that is because there are well more than 1 Billion insanely active and engaged users on the site.

That can’t be replaced.

Now, let’s go back to this quote again…

Meanwhile, Facebook says that posts that will be punished include ones “that solely push people to buy a product or install an app.” But… What about pages that provide value by sharing daily discounts? What if that’s the main purpose of the page and why users liked it in the first place?

This is where I see a potential contradiction, and where Facebook could get itself into trouble. If their goal is to show content that users want to see, there should be exceptions to the “no promotion” rule.

That’s why, in my opinion, it all goes back to engagement. If users are providing high quality engagement with a post, it shouldn’t matter whether it’s promotional.

Granted, this is almost always going to be the exception. Most promotional posts are incredibly lame and don’t deserve to be seen in the news feed. But I’m hoping that this isn’t a hard and fast rule.

How it Will Change Behaviors

Based on the strong language from Facebook’s announcement, I expect this to be a very big change. Those who continue to post boring promotional content will essentially be pushed out of the news feed. Those who listen may need to change their behavior.

This even includes me. In the past, I’ve nodded along with any change that punishes boring brand content. I hate the memes and I’m glad that click baiting no longer gives publishers an advantage.

The vast majority of my posts are educational, aiming to keep my audience updated on the latest in Facebook advertising. But even I share the occasional promotional post.

Granted, I don’t expect to get a whole lot out of that promotional post. My main goal is to promote it later with an ad.

As I think about this change, the key may not be to completely refrain from announcing that product, but instead simply being less “promotional” about it. For example, instead of a post that says…

It’s here! Click below to buy my new product NOW!

I’m so excited to share this with you! It’s been a long time coming.

And really? Users may react to the second one better anyway. Bottom line is this could — and should — change behaviors. And that includes mine.

But how about promotional content? Will Facebook flag certain words in posts? Will it be focused on English only?

My guess is the second, but it’s only a guess.

We Won’t Know Until It Happens

Take a deep breath. Sit down. Maybe put a cold washcloth on your forehead. Collect your thoughts and think…

We really don’t know what the impact of these changes will be on you, me or anyone else. You may completely forget about it two months from now when your results don’t change. It may actually benefit you.

I appreciate Facebook for being up front about these changes. But the problem is that such announcements also generate panic when in reality we have no idea how any of this will impact our businesses.

So before you freak out, let’s see what actually happens. Don’t rely on small sample sizes. Let’s compare our January and February results to what we were seeing in 2014.

That was an interesting quote from this same announcement. It seems Facebook is concerned that brands will revolt and abandon their pages.

That led to this:

Given the substantial traffic to Pages, we are exploring ways to build more features into Pages. A lot of this is in response to how we’re seeing people interact with business Pages. Some of these interactions include messaging to communicate with a business directly or browsing video and photo content. We’re also exploring ways to better customize Pages based on the industry a business is in, similar to how we rolled out menu sections for restaurant Pages.

So it sounds like Facebook has some goodies in development for the brands willing to stick this out. Stay tuned!

What are your thoughts on this latest announcement? Let me know in the comments below!