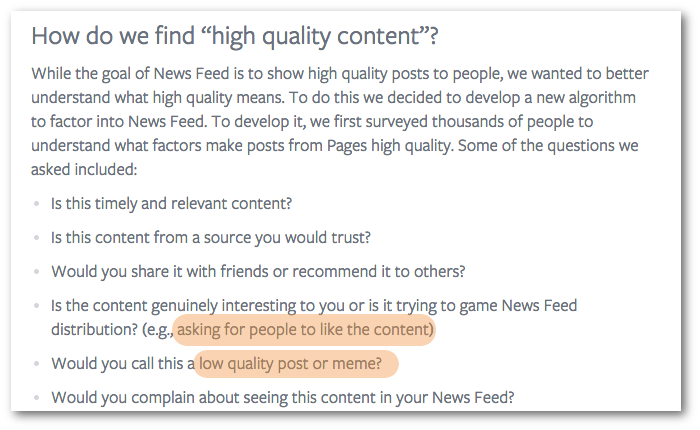 The new, transparent Facebook made an announcement last week regarding a recent change to the filtering algorithm (also known externally as EdgeRank).

While Facebook’s approach to being up front about these changes may be new, the reaction remained the same: Page admins lost their collective shhhhhtuff.

Facebook’s goal with News Feed is to show us content that is most relevant to us. They realize that the current filtering algorithm isn’t perfect. In particular, Facebook wanted to tweak how posts from Pages were being filtered.

As a result, Facebook surveyed thousands of people during the month of August to help understand what factors determine whether or not posts from Pages are “high quality.” Here are some of the questions that they asked:

With the results of this survey, Facebook would test out a new algorithm to favor “high quality” Page content. Understand that this new “machine” (as Facebook calls it) uses over 1,000 different factors to determine high or low quality. Some of those factors include:

Facebook then tested this new algorithm by adding it to the current one. Understand that it does not replace the “old” algorithm, so we should expect the changes to be small.

The new tweaks meant showing higher quality posts near the top of the News Feed. The result: An increase in likes, comments and shares and fewer hidden posts.

Why Everyone is Going Nuts

People are freaking out because of two things mentioned in that post from Facebook when referring to their survey:

And if you can’t come up with something original that is of value, the old stand-by has been sharing memes. After all, people love that crap.

Or do they? I’ll get to that in a minute.

When I first read of these changes, I was a bit confused.

Why would Facebook do this? Is Facebook trying to override what users are telling them is interesting by forcing their own definition with a new algorithm?

So was this necessary?

As time has passed, I’ve become more open to this change.

First, I really do hate memes and requests for comments, likes and shares.

Second, I have an assumption based on why Facebook is doing this. Yes, they have an algorithm that pushes engaging content to the top. Yes, they respond to negative feedback by punishing that content accordingly. But it appears that Pages were “gaming the system” with memes and calls for comments, likes and shares.

Based on the early results that Facebook saw (increased engagement and less negative feedback), it sounds like the change was effective. Users are actually engaging more with these high quality posts.

And really, isn’t this what we want? Natural engagement with creative calls to actionA call-to-action is a button or link on your ad that suggests the action you want your audience to take. Examples: "Learn More" or "Sign Up." More? High quality posts that lead to quality brand-customer interaction?

We don’t know. We won’t know until we experiment and observe the results. Don’t assume this hurts you until you monitor your own numbers.

And please, monitor your numbers. I’m still reaching about 16% of my Fans organically. My engagement has always remained steady. If you are going to put up a fight, make sure you have specific numbers to base that on.

It’s not yet time to freak out. That said, if your entire strategy is built around memes and calls for comments, likes and shares, then maybe you should react. But otherwise, keep doing what you’re doing (creating quality content) and see what happens.

Ultimately, Facebook wants to reward quality, original and creative content. Who knows? You may actually benefit from this change.

Many of the complaints from admins stem from a feeling that they once again need to change their approach. They’ve been told that sharing memes is the way to go. That they should ask for comments, likes and shares to get more engagement and get shown more often in the News Feed.

Here lies the problem. When you approach publishing this way, you prioritize the algorithm over the content. Screw the algorithm. Forget about it.

As SEOs will attest, you are fighting with fire when you chase an algorithm. It is evidence that you lack confidence in the depth and value of what you have to offer.

What are your thoughts on these changes? Let me know in the comments below!