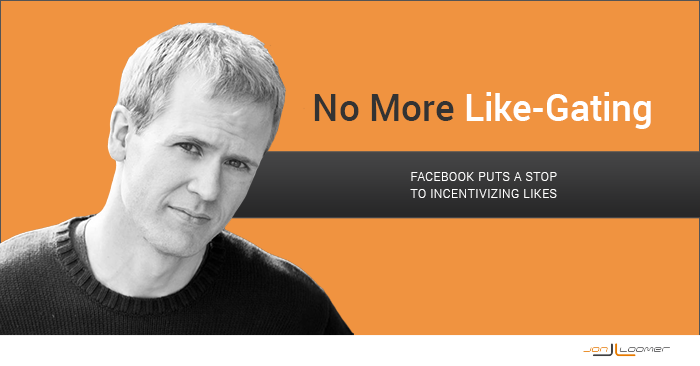 Facebook recently made updates to their API and SDKs, but one of the most impactful changes was buried at the bottom of the announcement:

You must not incentivize people to use social plugins or to like a Page. This includes offering rewards, or gating apps or app content based on whether or not a person has liked a Page. It remains acceptable to incentivize people to login to your app, checkin at a place or enter a promotion on your app’s Page.

The change went largely unnoticed for the first 24 hours or so. I’ve read responses ranging from “no big deal” to “freak-out mode.” In this post, I’m going to help you understand what this change means and how it will impact you as a Facebook marketer.

Did you hear? You can no longer like-gate on Facebook. Here’s what you need to know as a marketer…

If you use apps like ShortStack, Heyo, TabSite and many, many more, you may be using a like-gating (also known as “fan-gating”) feature. It works by showing different content to fans and non-fans.

Let’s use a contest for Brand A as an example. To make it work, you need to provide different views whether a user is a fan (“Click to enter!”) or non-fan (“like first to enter!”). When you visit Brand A’s custom app, Facebook will check to see whether or not you are a fan and present the view accordingly.

Well, this is no longer going to work. If you already have an app that is using this functionality, it will continue to like-gate until November 5. After that, the like-gating functionality of the app will stop working.

Like-gating functionality will not work for any new apps created going forward.

To ensure quality connectionsWithin your ad set, you can further narrow targeting by adding a connection to a page, app, or event that you control. and help businesses reach the people who matter to them, we want people to like Pages because they want to connect and hear from the business, not because of artificial incentives. We believe this update will benefit people and advertisers alike.

Ultimately, Facebook says this will improve the experience for both users (they will see content they actually want to see) and advertisers (targeting by interests is more effective).

Why It Makes Sense

Look, I have used like-gating. I constantly run ads to build relevant likes, and one approach I took in the past was offering my free ebook in exchange for a like. I found that to be very effective.

Unfortunately, this may be the exception when it comes to like-gating. The majority of brands using like-gating do it in connection to a contest. Many offer prizes (think iPads) that aren’t closely connected to the brand. Or it could be in exchange for coupons or even a contest with a relevant prize.

The main issue with this form of like-gating is that it is not in exchange for content. There is no implied desire to see that brand’s content in their News Feed.

On one hand, like-gating can be compared to website lead magnets where a valuable piece of content is offered in exchange for an email address. In either case, the value of that opt-in may be less than if provided without incentive. But the lead magnet is certainly an effective method of list building.

The difference, though, is that the negative impact of like-gating goes far beyond your number of likes.

Facebook tells us that the average user would see 1,500 stories in a given day. Facebook’s algorithms bring that number down to a more manageable 300. In order for Facebook to be a desirable place for users, the best and most relevant content needs to be surfaced.

Facebook uses many signals to determine what users see. But like-gating confuses those signals. Does a user really want to see content from that brand? It’s not always clear.

This move is aimed at preserving the value of the like. If users are liking pages for the purpose of getting something rather than because they actually want to see the content from that brand, it can harm the user experience. A bad user experience means users spend less time on Facebook.

Less time on Facebook — and fewer users — also negatively impacts advertisers. The implied reason is obvious — advertisers need users to be online to target them.

But preserving the value of the like is extremely important for advertisers as well. If I target users who like Brand B’s page, I do so because I think they have a common interest. But if Brand B built their audience through nothing but contests and giveaways, the value of that targeting is minimized.

That’s why I’ve written before about the “death” of interest targeting. It’s impossible to be 100% confident in the quality of another brand’s fan base. They may have acquired their audience by buying likes, running poorly targeted ads or by constantly running giveaways.

Why It May Be Too Late

This all sounds great, but I can’t help but think Facebook is a few years behind on this change to make much of a difference.

There are well over 1 Billion Facebook users who already like dozens, if not hundreds, of pages. Audiences are well established. Implementing this change will do nothing about the people who were incentivized to like pages in the past.

While this should be a positive change, the increase in quality will be a drop in the bucket. It should hardly be noticeable, particularly for larger pages.

I appreciate the move, and it may actually help the user experience. If a user rarely interacts with a brand, they won’t see that brand’s content anyway. But I doubt it will do much of anything for advertisers.

If I target fans of a particular page, I’m not able to only target “actively engaged” fans. I target all fans, and that will include those who were incentivized to like the page.

But targeting based on activity seems like a pretty darn good idea, doesn’t it??

One common response to this change I’ve read is that it doesn’t matter because you shouldn’t be focused on likes anyway.

I find this to be way off base.

The argument is focused first on the fact that Organic Reach is down for most brands, so the value of a like is diminished. While Organic Reach may be down for some (not all — including me), brands are still reaching a lot of people for free. That remains significant.

Additionally, the act of a “like” helps marketers bucket users for more effective targeting. If you build your audience with relevant people, this gives you a highly effective group of people to target when building your email list, driving traffic to your website or selling.

I’ve seen it over and over again: Fans convert at a very high rate. I see this through organic content and with ads. Read this example and this one from my personal experiences.

This isn’t the end of the world. Embrace that your fans will be those who care most about your brand. But also accept that it will now be harder to increase those numbers, particularly if you previously thrived with contests and other like-gating.

No matter what the method of increasing your audience, you need to establish a compelling value proposition. Why should someone like your page? The “incentive” may be as simple as providing the most thorough, helpful or entertaining information in your niche.

Don’t panic. Increasing likes still matters. But it may be time to get more creative with your methods.

Additionally, you should still use third party apps to build your email list. So instead of requiring users like your page to get the incentive, you are collecting an email address. This is allowed!

How does the loss of like-gating impact your approach and Facebook marketing in general?