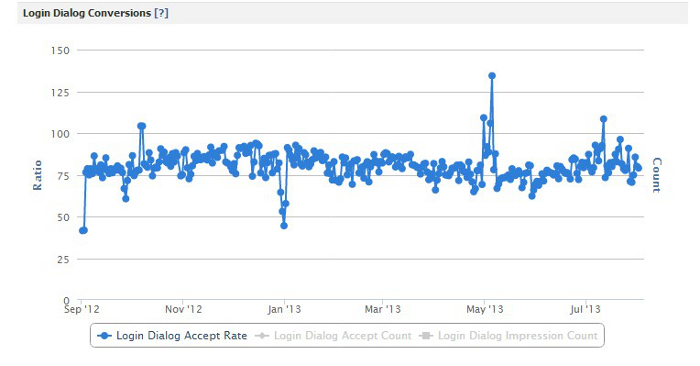 [The following is a guest post by Emeric Ernoult of AgoraPulse.]

This morning I received another email from a client who doesn’t want her Facebook contest app to require app installation and permissions from her participants. She believes this will reduce her conversion rate.

I’m not alone in this situation. Our friends at Woobox face the same questions over and over again

I explained to her that the app installation requirement was, by far, the best option to create value for her Facebook Page and offer the best possible experience to her fans. Last May, I published an entire blog post on this very subject.

Just to give you a little recap, here are the 5 main reasons why a Facebook App install requirement is the best way to go for your campaign: 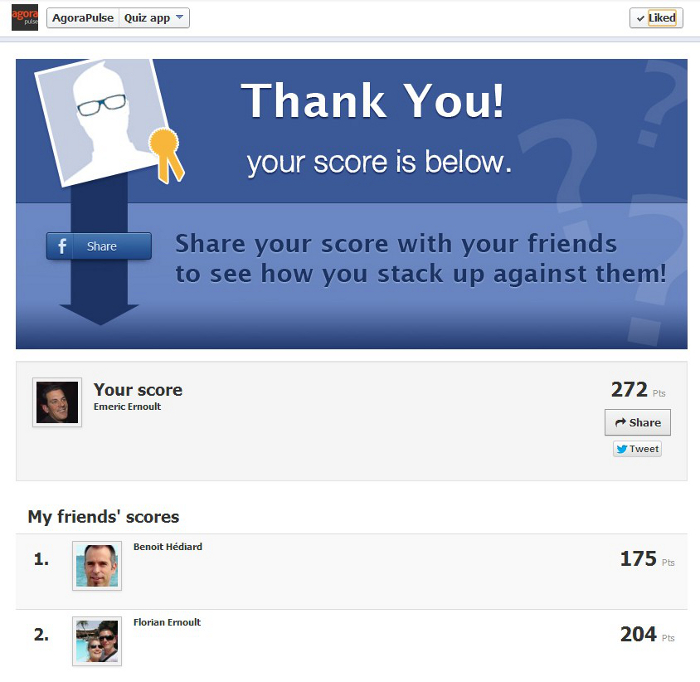 Offering a social context is one of Facebook’s unique advantages. In a Facebook Quiz, the social context offered by the app install will allow each participant to see how she is stacking up against her friends. This type of entertaining context would not be possible if she had not installed a Facebook app.

All right, enough of the pros and cons. Let’s get to the hard facts. At the end of the day, what’s really on your mind is whether or not requiring your Facebook contest participants to install your app will damage your conversion rate, right?

So, let’s look at the conversion rates for 6 of our most popular apps over thousands of campaigns run by thousands of different brands from September 1st, 2012 until August 1st, 2013.

In order to be more transparent, I’m copying screenshots of the Facebook insights for each of these applications below.

In a nutshell, the average conversion rate is around 70%. The lowest average conversion rates belong to apps where there is usually nothing to win (Fan Vote). So, when it’s just for fun and there’s no benefit attached to giving away their profile information, fans will be more reluctant to do so. Duly noted.

The variations between campaigns can be very significant. The best get conversion rates close to 100%, whereas the worst can get as low as 30%. 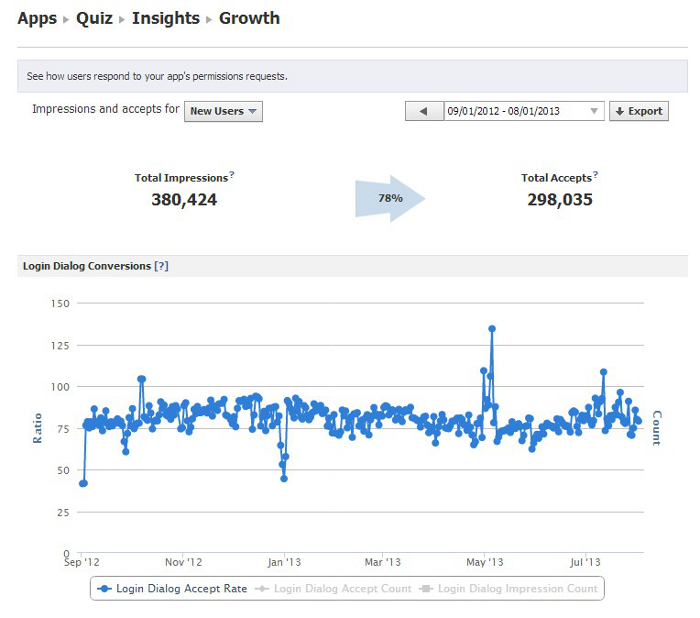 On average, over an 11 month period, 78% of our Facebook quiz participants have installed the app. Median conversion being between 70 and 85%. 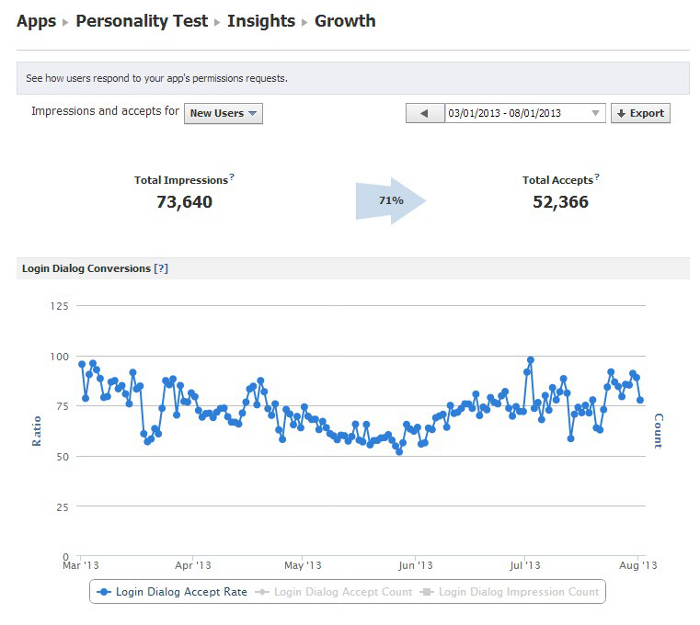 On average, over an 11 month period, 71% of our Facebook Personality Test participants have installed the app. Median conversion being between 60 and 80%. 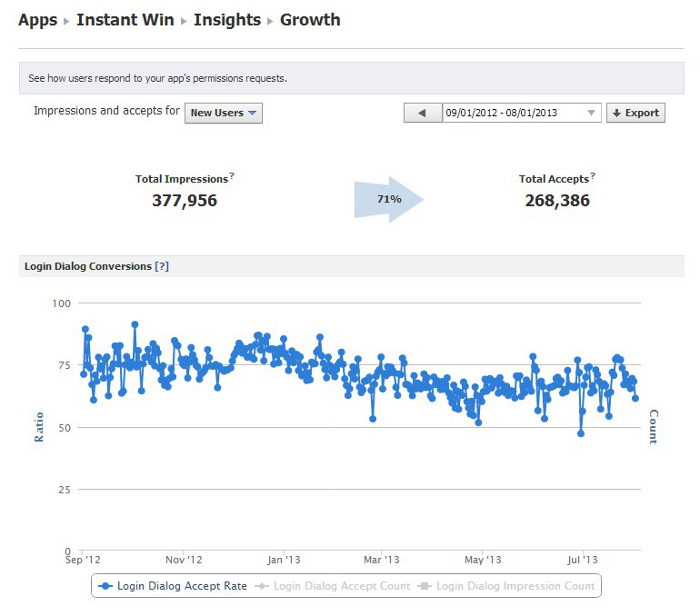 On average, over an 11 month period, 71% of our Facebook instant win participants have installed the app. Median conversion being between 65 and 80%. 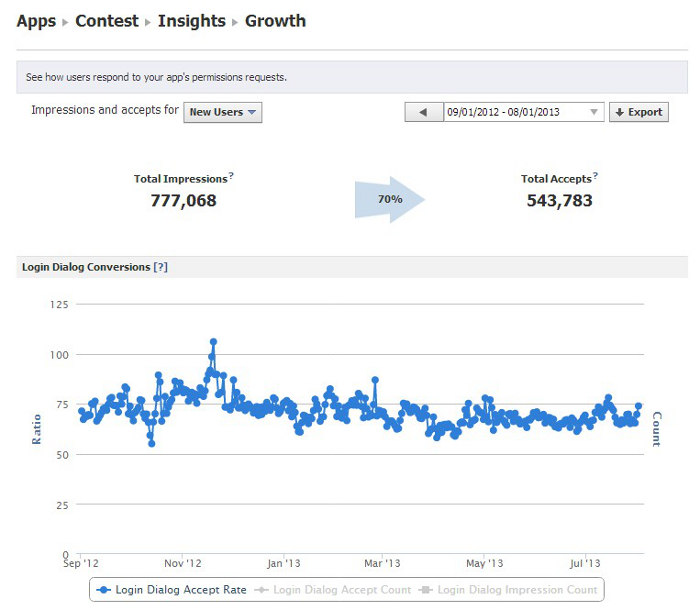 On average, over an 11 month period, 70% of our Facebook photo contest participants have installed the app. Median conversion being between 60 and 75%. 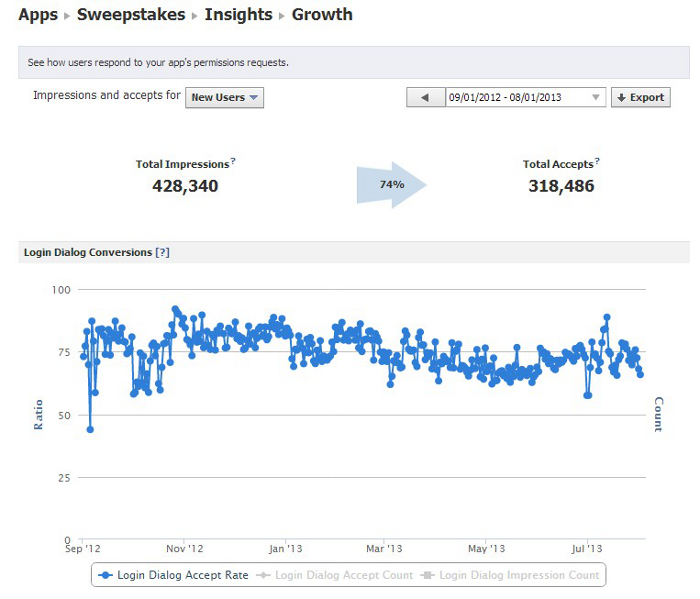 On average, over an 11 month period, 74% of our Facebook sweepstakes participants have installed the app. Median conversion being between 70 and 80%. 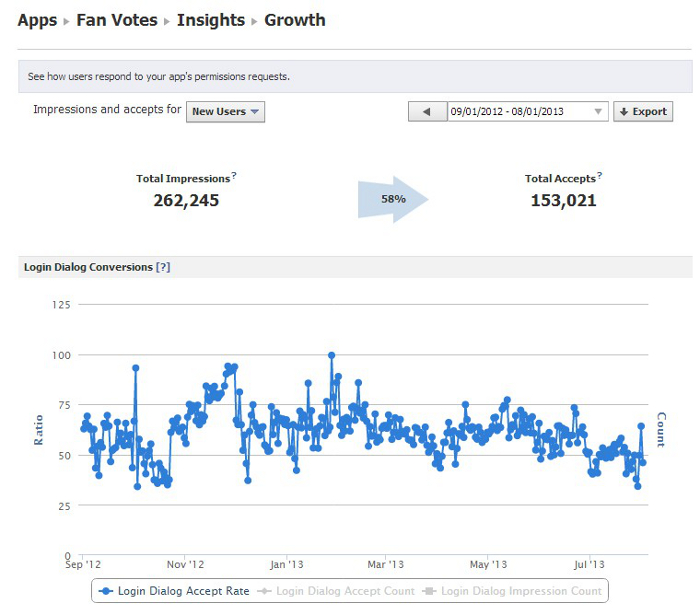 On average, over an 11 month period, 58% of our Facebook fan vote participants have installed the app. Median conversion being between 55 and 70%. This is the lowest score among all of our benchmarked apps, but this is also the only app for which there are generally no prizes offered.

There can be a HUGE difference in terms of conversion rate from one campaign to another. So, what are the criteria separating the great campaigns from the not-so-great? The answer is simple, and can be summarized in two words: Trust and Reward.

The trust factor is a little trickier and is made of several different components:

There’s not much you can do for your brand’s credibility in the short term. If you’re already a well-known and trusted brand, people will be more likely to trust you with their data. If you’re not well known and trusted yet, you’ll need to do well in the following two criteria.

Your campaign’s credibility will address one legitimate question on your participants’ minds, especially if you are not a globally trusted brand: Are these guys serious, or are they just trying to get my email address and Facebook credentials so they can spam me for the next 5 years?

Looking serious is the first thing you need to concern yourself with. Don’t be too cheap on your campaign’s design. If your visuals look like they’ve been created by some kid for $5 on Fiverr, it’ll be hard for your campaign to inspire trust. Good looking visuals should not cost you more than $100 if you find the right freelancer. This is a small investment that will make a big difference.

Concerning transparency, it’s pretty simple: Draft clear (and well written) rules, feature the winners of your previous campaigns and comply with all applicable laws. This should all go without saying, but surprisingly, many Facebook contests and sweepstakes don’t.

Your brand’s credibility, your campaign’s transparency and the attractiveness of your prizes will have a HUGE impact on the conversion rate. A well-known and trusted brand will achieve higher conversion rates, lesser known brands will have to work harder. Trips to the Caribbean will attract and convert more users than a bunch of coffee mugs. Makes sense.

An average conversion of 70 to 80% is not bad at all. If you look at Facebook’s own internal data, they consider 80% to be very high. In fact, only the best apps have conversion rates in the 80% range according to Facebook (Foursquare and songpop are cited as examples).

So, on average, your humble sweepstakes may get the same conversion rate as a giant brand like Foursquare. Not bad.

According to Hubspot, Sweepstakes overall entry conversion rates are typically between 20 and 40%.

When you see a 70 or 80% conversion for your Facebook sweepstakes or contest app, you may think, “I’m losing 20 to 30% of my potential participants!” Look at the numbers and think twice!

No sweepstakes or contests run on the web have a 100% conversion rate. According to our own internal data, simply asking for a first name and email address can drop your conversion rate by 20%. And each additional field you add (date of birth, Address, phone number, etc.) will add to the loss of conversion. A form with too many fields may make your conversion go as low as 30 to 35%.

On the other hand, once you’ve asked for a Facebook app install, the conversion rate on a simple form with less than 3 fields is between 90 and 100%. Once participants have installed a Facebook app to enter your campaign, they are very likely to fill-in a form as well, as long as it’s not unreasonably long.

The bottom line? Facebook app install conversions are generally no lower than that of a typical web form, and many times, your rate may be higher.

I’m convinced that the value behind Facebook is in building a stronger connectionWithin your ad set, you can further narrow targeting by adding a connection to a page, app, or event that you control. with fans you know. If you want to engage with your customers, you’re going to have to provide them with the best social experience Facebook can offer, and you just can’t do that without requiring an app install.

What do you think? Have your experiences with app installations and conversions been positive or negative?