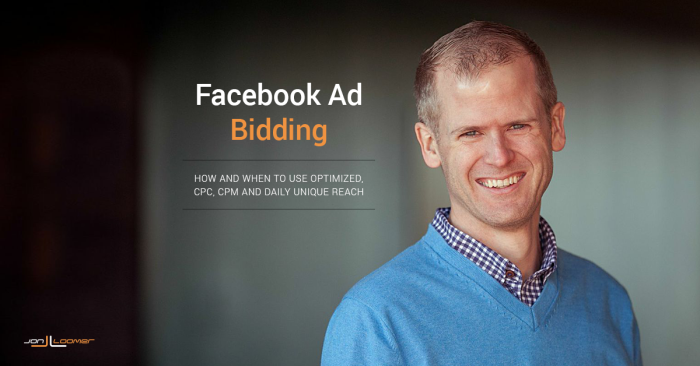 Advertisers struggle with the seemingly limitless options when optimizing Facebook campaignsThe campaign is the foundation of your Facebook ad. This is where you'll set an advertising objective, which defines what you want your ad to achieve..

How many ad setsAn ad set is a Facebook ads grouping where settings like targeting, scheduling, optimization, and placement are determined. should be used? How many ads should be created? Which audiences should be targeted? Which objective should be used? How high should the budgetA budget is an amount you're willing to spend on your Facebook campaigns or ad sets on a daily or lifetime basis. be? What placement? Which bidding method and what should be the manual bid?

This blog post is meant to help answer the question regarding which bidding method should be used and when. Of course, success can be found in many different ways so this is merely a guide. But it is a good starting point for advertisers unsure how to begin.

Following are the main bidding options:

[Tweet “When should you use optimized bidding, CPC, CPM or Daily Unique Reach? Here’s a guide…”]

First, understand that your bidding options will depend upon the objective you choose. For example, here are the “Optimize For” options within the ad set in Power Editor when the Clicks to Website objective is selected… 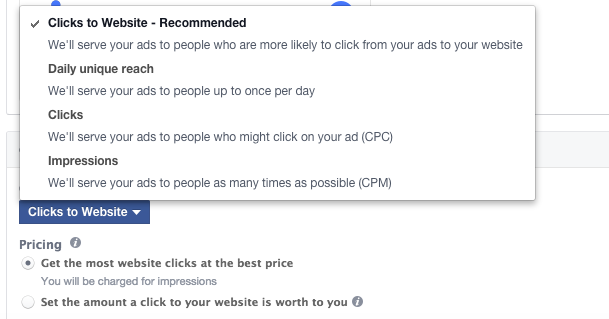 We’ll dig into what all of this means and when to use it shortly. For now, here’s a look at your “Optimize For” bidding options by objective (* marks default)…

Optimize for a Specific Action

The default and recommended bidding option for all but the mobile app objectivesThe campaign objective is the ultimate goal for your Facebook ad. Your selection will impact options, including optimization and delivery. is to optimize for a specific action — in each case, optimizing for the objective.

When this option is selected, Facebook will show your ad to people who are most likely to perform that action. Following are the actions you can optimize for:

Let’s say, for example, that you have created a campaign with a Clicks to Website objective because your primary goal is to drive traffic to a blog post. You then create an audience consisting of fans, website visitors, lookalikes or interests.

If you have Facebook optimize for Clicks to Website, your ads will be shown to people within your targeted audience most likely to click the link in your ad. Facebook knows this based on user activity and their history of clicking links.

The same is true for all other optimized actions. No matter how much you spend, Facebook won’t show your ad to everyone within your target audience. They are going to focus only on those most likely to perform your desired action.

This is often an area of confusion for advertisers. They have a potential audience of 100,000, and they don’t understand why the ad is only shown to 10,000 people.

The reason for this is that you shouldn’t want Facebook to show your ad to all 100,000 people. By optimizing for an action, Facebook is limiting your waste, showing it only to those most likely to act.

When optimizing for actions, by default you also won’t set a bid. Facebook will bid whatever is necessary to reach the audience most likely to act.

As a result, CPM (Cost Per 1,000 Impressions) tends to be higher when this option is chosen. Some advertisers see this as a reason not to bid this way, but neglecting it due to high CPM would be a mistake.

By optimizing for a specific action, you are wasting fewer impressions on those who are unlikely to act the way you desire. As a result, there is a benefit to paying more to reach those most likely to act. Your cost per desired action, in most cases, will be lower as a result.

By default, you won’t need to set a bid. Facebook will get the most actions at the best price, whatever that is. But you will have the option of manually setting what that action is worth to you.

Note that this isn’t a true “bid.” Facebook will attempt to keep costs per action below that threshold, so that acts as a guide for how Facebook will bid.

Personally, I’d always start with having Facebook automatically bid for you. Once you know what you’re doing and have the budget to experiment, feel free to split testSplit testing (or A/B testing) allows you to test changes in Facebook variables like ad creative, audience, or placement to determine which approach performs best. with the manual option to see what works best for you.

When this option is selected, Facebook will show your ad to as many people within your target audience as possible, but no more than once per day. 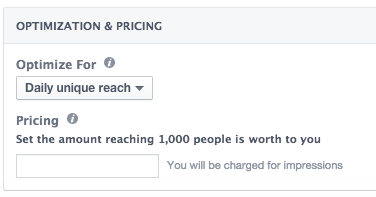 Once again, you will be paying for the impressions, not the actions. So it doesn’t matter how many actions you get, your cost will depend upon your bid and the number of times your ad was shown.

You will need to set a maximum bid to tell Facebook what reaching 1,000 of these people is worth to you. This cost will be lower than what you pay when optimizing for actions, but expect it to be higher than when using regular CPM.

This bidding option is likely the most misunderstood.

Optimize for Clicks is another way for saying that you are using the Cost Per ClickFacebook reports on CPC (All) and CPC (Link Click). The first refers to all clicks and the second on all internal and outbound links. (CPC) bidding method. In this case, you will be paying for the clicks made to your ad.

As a result, advertisers often misunderstand these stats. They see a high number of clicks and a low CPC and assume success. But that number of clicks is bloated with many clicks that don’t mean anything, devaluing the CPC.

If your goal is engagement, however, this is a good option. In that case, Facebook will show your ad to people most likely to click anywhere on your ad.

You will have options of allowing Facebook to automatically set the bid (get the most clicks at the best price) or set the maximum you’d be willing to pay per click. 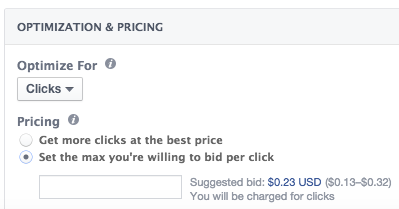 Again, if you don’t know what you’re doing just roll with Facebook’s default here. Once you get more comfortable and have the budget to split test, feel free to experiment with your own maximums.

Facebook does provide a recommended range for entering a maximum that would be required to reach your selected audience. Note that this is a maximum, so Facebook will bid no more than that amount to serve your ad.

If you optimize for impressions, Facebook will show your ad to as many people within your target audience as many times as possible. This is similar to Daily Unique Reach optimizationReach optimization allows you to show your Facebook ads to the maximum number of people while using a frequency cap., but without the single daily impression limitation.

As is the case with Daily Unique Reach, when this option is selected Facebook will not optimize for a desired action. You will pay for impressions, and the cost to reach people should be low given that Facebook won’t need to be picky about whom to serve your ad to.

You will be required to set a bid, indicating the most you’re willing to pay for 1,000 impressions. 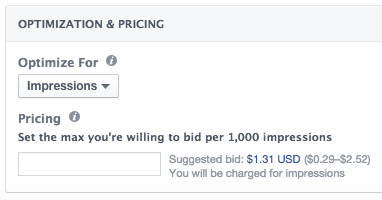 As is the case with CPC, this is the maximum — Facebook will bid up to that amount to show your ad.

While bidding CPC or CPM, you should make sure you bid high enough. Bidding too low is a primary reason for not getting your ad shown.

What Should You Use and When?

First, understand that personal preferences come into play here. I’m not going to say that one method always works better than another. But I do believe that we overcomplicate this, and beginner to intermediate advertisers should bid almost primarily for optimized actions.

Here’s a quick guide for when to use each method…

Optimized for Actions: I’d recommend using this in most cases. It works best when targeting large audiences (so that Facebook can pick out the top percentage most likely to act), but that doesn’t mean that this method can’t work for small audiences, too.

But if you are going to target a small audience with this method, just make sure that your budget is low as well. I consider $5 as an average CPM. So if I’m targeting 10,000 people, I’d expect Facebook to optimize and show it to about 1,000 of those users. In that case, a daily budget of $5 would be sufficient.

Optimized for Daily Unique Reach: I would only use this approach when targeting an extremely relevant audience. In other words, it doesn’t matter which person within your target audience is served your ad, all are equally likely to perform your desired action.

This is rare, but an example of when you’d want to use this is when targeting a very small audience — like an email list, for example. This method would be chosen over CPM to avoid the high frequencyCalculated as (Impressions/Reach), Frequency is a Facebook ads metric that measures the average number of times users have seen your ad. that can happen when bidding too high for a small audience.

By using Daily Unique Reach, you can max out your bid and reach as many people within your target audience as possible, but you won’t waste any of your budget on high frequency impressions on the same user.

Optimized for Clicks: If all you want is engagement and not a specific action, you should optimize for clicks. A prime example of when this makes sense is when promoting a photo or some other post that doesn’t include a link.

That doesn’t mean that you won’t find success optimizing for clicks when your objective is driving website traffic or conversions. However, I’ve found it much less effective overall than optimizing for your desired action.

Optimized for Impressions: You just want to show your ad to as many people as possible as many times as possible. As is the case with Daily Unique Reach, your target audience should be as relevant as possible.

Be careful about your budget, however, particularly if you show the ad in the sidebar (where frequency is not capped). Frequency can get out of control in a hurry, which means you’ll begin wasting money on extra impressions to the same person.

Reaching the same person more than once in a day isn’t necessarily bad, but there is a point where it will become wasteful.

What bidding methods do you use and when?