Historically, the average CPMCPM measures the cost per 1,000 impressions. It's a good metric to evaluate competition level and costs to reach your audience. More (Cost Per 1,000 Impressions) has increased for Facebook advertisers during the holidays as competition for eyeballs and ad spending increase. Did it happen this year?

Prior to 2020, advertisers routinely saw CPM costs double, triple, or more during the most competitive times. I wrote a blog post about this phenomenon way back in 2014. Here’s a graphic showing that increase from 2013. 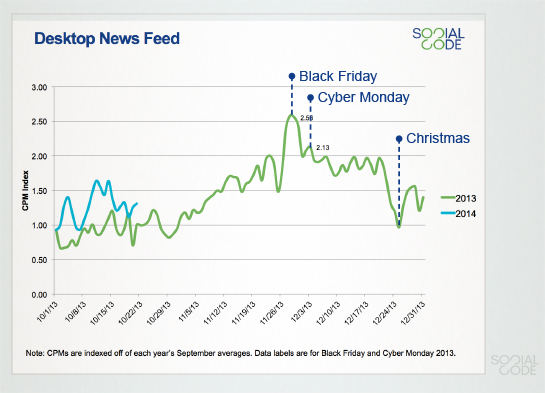 Of course, things got a bit weird and difficult to predict since 2020. Let’s take a look at what has happened so far this holiday season.

I use the Within Marketing Pulse to track Facebook CPM and other information. It’s a free resource. Within provides reporting on what they’re seeing from their clients with $500 Million in budgetA budget is an amount you're willing to spend on your Facebook campaigns or ad sets on a daily or lifetime basis. More. 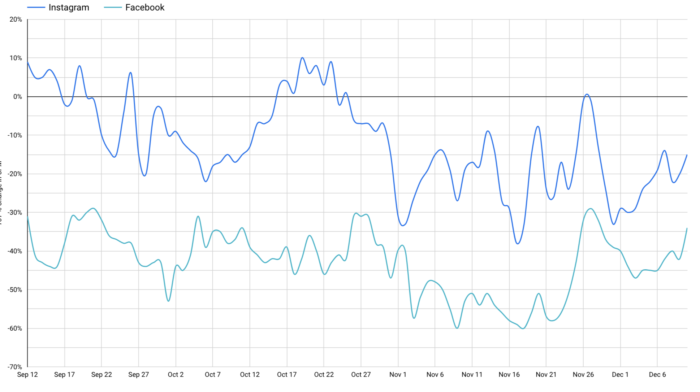 Facebook CPM has remained well below where it was on the same day a year ago. It’s remained between 30 to 60-percent below last year’s CPM throughout the past three months. Instagram CPMs have held closer to last year’s costs but are still down most days.

Well, maybe last year saw higher CPMs this time of year than normal. We should also check to see if CPM costs are generally trending up during the holidays.

Here’s a chart of the average CPM on Facebook during the past three months. 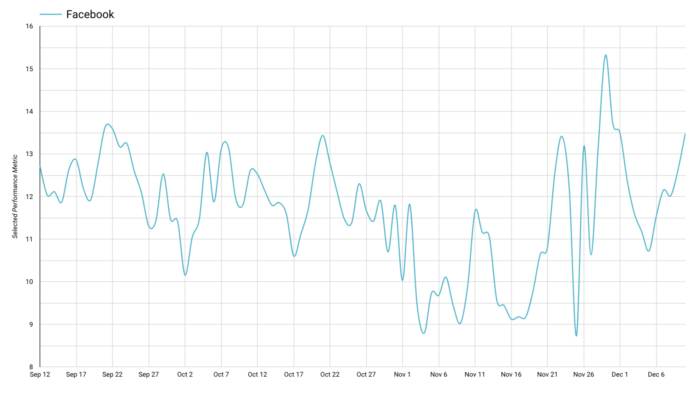 The average CPM for Within clients held consistently between $8.73 (November 25) and $15.32 (November 29). Prior to November, it was generally around $12.50. CPMs certainly became most volatile during November, but that resulted in just as many extreme lows as highs.

Overall, Facebook CPM is moving generally along that $12.50 line. It’s difficult to make the claim that we’ve seen a clear holiday spike since the lowest CPM during the past three months reported by Within happened on Black Friday (November 25).

Why Aren’t CPMs Going Up?

First, it’s important to point out that Within Marketing Pulse doesn’t represent all advertisers on the platform. There could be biases and small sample issues here.

We don’t know precisely what Facebook is seeing globally. We do have Meta’s Q3 Earnings Report. Meta reported a steady drop in average cost per ad. 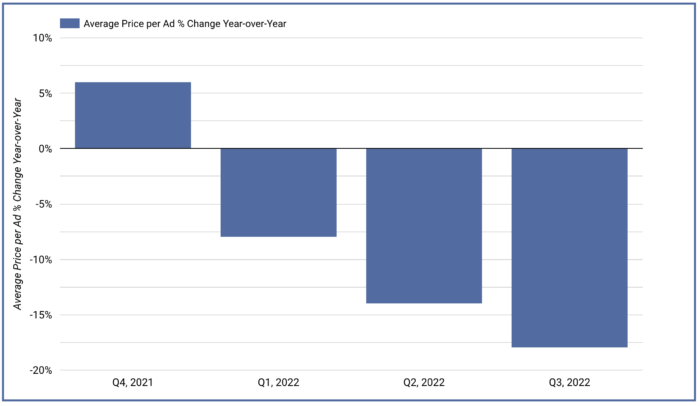 Meta also reports a flattening in ad revenue, which is unusual historically for the platform. 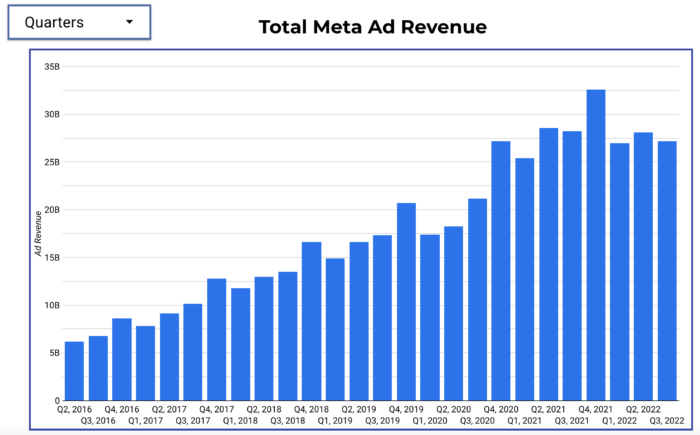 A drop in ad costs (loosely CPM) could be at least partially related to a drop or flattening in ad revenue. Are advertisers spending less this holiday season? Are there fewer advertisers?

I’m also not an economist. Another potential factor related to CPM would be inventory. Inventory could be related to the number of users and the amount of time they are on the platform. It can also be altered by adding or removing placements. An increase in inventory would make it more difficult for CPM costs to increase (I presume, though it’s not my expertise).

We’re missing the fourth quarter, of course, but it will be interesting to see that data when it comes up. That will give us a much better idea regarding what has happened with advertising during the holidays in 2022.

These are signals that CPM costs aren’t taking a normal holiday spike. As a result, this may be the best time to advertise. Not only are costs steady, but your customers are primed to buy during the holidays.

There are always variations in industries and brands, but there is a potential opportunity here.

I haven’t seen a dramatic increase in CPM related to my advertising, though that’s the definition of small sample sizes. What are you seeing?