What do you wanna be when you grow up?

Michael’s response to this simple question is probably quite similar to that of others his age. Michael shoots for the stars. And he knows exactly what he wants to do.

This is his plan:

1) Go to college for “three to five years”
2) Play baseball (shortstop or pitcher) for the Milwaukee Brewers for 15-20 years (depending on health)
3) Own or be the general manager for the Brewers for a few years
4) Become a professor, mathematician or teacher until he retires

Pretty simple, right? The kid’s got it all planned out. The only qualifiers had to do with his health. He may play only 10 years in the big leagues if his health limits him.

You have to love the way kids think. It’s pure. While Michael is getting old enough that he’s starting to grasp realities, obstacles (injuries) and necessity to have back-up plans, his goals are limitless.

Michael starts with the “sky’s the limit” plan. Becoming a baseball player for the Milwaukee Brewers for 15-20 years before becoming owner or GM is one of the most complicated and difficult scenarios one could consider. Once he’s ready to “settle down,” he’ll use his knowledge from college to be a professor. Or mathematician. Or teacher.

Two weeks ago today, I was laid off. Since then, I’ve repeatedly been asked a variation of the question I asked Michael:

So what are you looking to do?

I have to admit, I approach the question much differently than Michael. My goals have been corrupted by an adult’s negativity, reality, failures and fears. Unlike Michael, I don’t start from the top. I start from the back.

It’s the easiest start. It’s the widest net. It’s not looking outside the box, by any means. It’s the safe play.

Oh, I’ve been in sports before. I’d love to do it again. It’s just a matter of not limiting myself to one particular industry, and that’s a little scary.

Yeah, I would. I’m only limited here by the fact that I’ve never completely gone on my own before (fear), so there is some unknown. And there’s that whole concern about benefits and whatnot. It’s one of those things I say, but don’t necessarily expect it to happen — at least on a full-time basis.

4) I’m looking to get PastKast funded 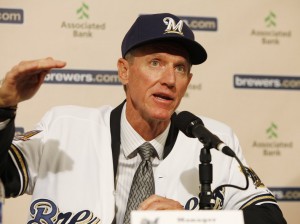 Michael's right. I could totally do Ron Roenicke's job!

I watch baseball with Michael regularly, and I coach his team every year. Every now and then, after I complain about a particular coaching move, Michael will look at me and say, “You should be the Brewers manager.” One day he may say it sarcastically, but right now he means it wholeheartedly.

I just smile. I think he’s nuts. But I love the purity of the suggestion. In a way, I think he’s right. I could totally do what Ron Roenicke does. I’m only limited by the negativity, reality, failures and fears of an adult.

It’s time that we all approach our careers like kids again. If we aren’t a baseball player like we originally planned, why? When did we give up on our dreams?

Look, I understand there’s a certain level of realism that has to be taken into account. Back when I was a kid, I used to want to play for the Milwaukee Brewers, too. As much as I want it to happen, my chance is gone.

But I can still reach the other dreams that are within my grasp. You can, too. We’ll just dream responsibly.

How about you? What career dreams do you have?