For the past couple of months, I have struggled with the thought of creating my own Facebook page. Obviously, I understand the value of a Facebook page. I’ve created several over the years. But did I need one for my own consulting business? 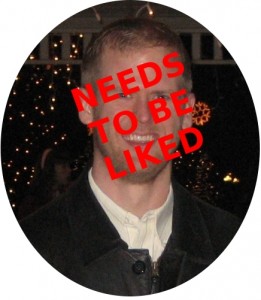 It's pathetic. This guy needs to be "Liked."

Initially, I thought I could get by without it. I pointed to Facebook’s subscription service as my replacement for a Facebook page. When I want to communicate with my “fans” (HILARIOUS!) I just publish a public post.

But lately, I’m realizing more and more that this subscription thing ain’t gonna cut it. At least not for my purposes.

My friends are likely annoyed

They’ve never said as much, but I’m betting they’re annoyed by my daily posts from my blog. Particularly now that I’m trying to publish a couple of Facebook tutorials per day. I know I’m annoyed when my friends use their personal Facebook only for promoting themselves.

But I didn’t feel like I had much of an option. I write mainly about Facebook. My stuff is most relevant to those who use Facebook, so it only makes sense if I share it there. And I’ve had some great success sharing these posts on Facebook in the past.

I want to use my public posts for other stuff, too

Another weakness of the subscription feature — again, at least for my purposes — is that my public posts won’t only be about one subject. I’m a huge sports fan, and I also run the PastKast network to help Brewers fans relive historic seasons in real time. So I want to share that stuff, too.

Problem is, the people who have subscribed to me likely are doing so for my blog material. They don’t want to see my posts about baseball. It’s not relevant to them.

But… I can’t just stop posting non-blog stuff publicly. Sometimes, I want to post publicly about other subjects.

If I were to create a page, one option would be to do it under my name. A page… so people could “like”… me.

This is one of my hang-ups over creating a page for myself from the start. We still see people who “like” a page as “fans.” That term just seems ridiculous when it comes to anyone who likes my page. I’m sure as hell no celebrity. And I felt like only someone with a substantial following has the right to create a Page in their name.

So I’ve come to the determination that I’ve gotta do it. It just makes sense. I can separate business from pleasure much more cleanly this way, and I’m free to post publicly about whatever I want without feeling like it only applies to a particular group.

It’s actually somewhat liberating to make this decision. Facebook hasn’t felt “right” to me lately. I don’t enjoy being self-promotional all the time with my personal account. This just makes sense.

Of course, once I decided to take that leap, I had another issue to face: Do I create a page under my name or as a business? As I said, it just seems strange to create a page for myself.

But I don’t like the alternative. I don’t like the idea of trying to come up with yet another catchy social media/marketing company name. Everyone has one. And the thing is, most sound like scumbags you can’t trust.

And not being a scumbag is part of my “brand.” I don’t think I’m like the other dudes. I don’t consider myself an “expert” or “guru” or “ninja.” Even using those terms makes me wanna gag. I’m just like you except that I happen to know a lot about stuff that blinks.

And that’s when I decided the page has to be under my name. I don’t want to hide behind a company name, and I don’t want to regret picking that name down the road. I’m stuck with the name “Jon Loomer,” so I might as well roll with it.

I started building my page today. Sure, go ahead. Take a look and “like” it. But it’s certainly a work in progress. I want to do this right since it’s a reflection of what I can do for you.

I’ve created a couple of iFrames already, but again… it’s a work in progress. I need to create secure links for the pages I’m iFraming in or some of you won’t be able to see that content. So if something doesn’t work, please be patient.

Thanks for “liking” me. As weird as that seems. More to come!