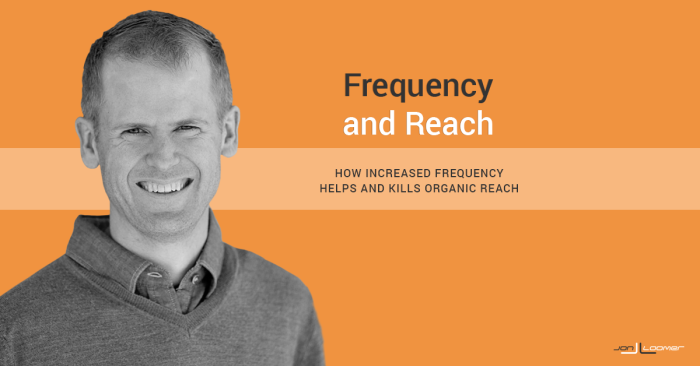 If you were to peruse the most popular blog posts these days related to Facebook marketing, you will repeatedly see a common theme. Post upon post is either about how Facebook organic reach is dead or how you can beat the algorithm and improve your organic reach.

This post isn’t about that. Instead, it’s about how the obsession with organic reach is helping to kill it.

[Tweet “Increased post frequencyCalculated as (Impressions/Reach), Frequency is a Facebook ads metric that measures the average number of times users have seen your ad. can both help and kill Facebook organic reach. Here’s how…”]

Research from Adobe Digital Index suggests that brands are posting 31% more frequently in the first quarter of 2015 compared to the same period in 2014. 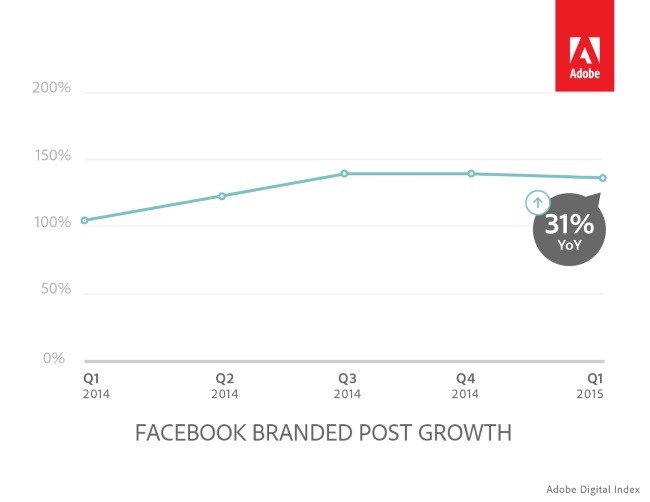 ADI analyzed nearly 500 billion post impressions, coming to the conclusion that brands were posting more frequently to combat dropping organic reach (though it’s not clear how this conclusion is drawn).

While posting frequency was up 31%, organic impressions were down 35% year-over-year.

If you want to reach more people, posting more frequently is generally not a bad idea. In fact, I recommended just that in a post I wrote about a year and a half ago.

The concept is simple. If you post once per week, there is a small percentage of your audience that even has a chance to see your post. Algorithm or not, the pool of people who could make up your potential audience will start only with those people who were online during that window of time.

Considering a little more than half of all active users are on Facebook every day and those who are may have checked in either before your post or several hours after, it’s quite reasonable to assume that your potential organic audience of a post would be well below 50%.

The complaint among brands, of course, is that organic reach for many is way, way below 50%. In some cases, around 5%.

Clearly, if you only post once per week and reach 5% of your fans, there’s a very simple way to reach more people. Just post more often.

Instead of posting once per week, consider posting once per day. Post at different times each day. Even if your organic reach isn’t higher for each post, you’ll be reaching a potentially different audience each time, thereby increasing the total number of people reached during a week.

Now, there’s a bit of a rub with this approach…

Regardless of whether Facebook uses an algorithm, an increased post frequency strategy can have an adverse effect on the news feed — and ultimately the ability to reach people.

Frequency and the News Feed Algorithm

First, let’s look at it from the perspective of reality: Facebook uses an algorithm to show content to users they are most likely to want to engage with.

In this case, Facebook creates a structure to filter out the noise. While details haven’t been provided in some time, we’ve been told in the past that the typical user could see as many as 1,500 stories in a given day but Facebook shows them only 300.

Keep in mind that these numbers came from an old report. It’s very likely that the typical user now has the potential to see well more than 1,500 stories in a given day, but Facebook — as far as we know — is still aiming to show the 300 stories that user is most likely to engage with.

There are more users on Facebook now. There are more brands. And brands are posting more frequently. All of this creates more noise, thereby creating more content that will simply be filtered out and never reach the news feed of a specific user.

Frequency and No Algorithm

Before you get crazy and blame Facebook’s algorithm, let’s think about the alternative. If all of these factors remained true — increased users, increased brands and increased brand post frequency — what would the news feed look like without a filtering algorithm?

As the amount of content grows, the speed of the feed escalates. While you may be more likely to see what Facebook serves you now (at least briefly), that relevant content is much more likely to speed past you in an unfiltered feed. Just think of Twitter and what your likelihood is of seeing a two hour old post there.

Even had the news feed been unfiltered (which it never will be), this increased frequency would lead to a decrease in organic reach.

Organic reach per post is going to continue to drop naturally for several reasons:

Regarding the last bullet, keep in mind that Facebook has been around for over 10 years now. Your Facebook page is undoubtedly not new anymore. You have fans who have liked your page for years. And as a result, that leads to stale likes — people who technically like your page, but either aren’t as active now as they used to be or simply don’t care that much about you anymore.

So we know that reach is dropping. It will continue to drop. And while you can certainly blame Facebook’s algorithm for that if you want, it’s only one of the many contributing factors.

If you obsess over reach on a per post basis, you are likely to not only be disappointed but to miss the bigger picture.

If you are going to monitor reach (I personally see it as a secondary or tertiary metric), worry more about how many people you reached during a given week or month. How does that number compare with your total number of fans?

[Of course, this is underreported since I target fans when I promote these posts so Facebook no longer counts reaching those users organically. However, this is a discussion for another day.]

Within the page level export of Insights, there are a couple of helpful columns within the main Key Metrics tab:

Keep in mind, of course, that I don’t post nearly as frequently as I once did. On average I’m posting about 2.7 times per week right now, which limits the difference between post reach, weekly and 28 days. However, I’m still reaching more than 40,000 unique people per week organically, and I’d consider that pretty good considering my low frequency.

[SIDE NOTE: Why am I posting less frequently? The main reason is that I have less content. I used to publish five or six new blog posts every week. Now it’s only one per week. Your frequency should be consistent with the amount of quality content you have to share, otherwise you will start spreading yourself too thin.]

I understand that post reach is impossible to ignore. Facebook throws it in our face. But don’t freak out about it — and certainly don’t measure success and failure due to it. Instead, keep a close eye on how many people you’re reaching per week or month.

One format that is doing extremely well on Facebook right now is video. It gets great reach and engagement, largely due to auto-play.

I decided to test this by breaking all of the rules and publishing a 45-minute talking head video to Facebook — a video version of the Social Media Pubcast.

How did it do? Well, I shared the results in a post I wrote for Power Hitters Club members only. Read that post here.

How frequently are you posting per week? How is that impacting your reach, and what are you seeing on a per week and per month basis?