I tend to fill these pages with tutorials and breaking news about Facebook. I tell you how to build an audience with social media and drive traffic to your website. Today, I’ve decided to take a temporary and necessary turn. 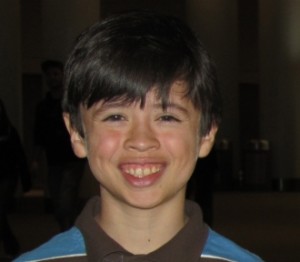 I’ve run into a bit of a challenge, and I wonder if you can help.

I need to devise a social media strategy like nothing I’ve had to before. It’s one thing when it’s for a client or your own business. It’s an entirely different story when it’s this personal…

At the age of 2 1/2, our oldest son Michael was diagnosed with neuroblastoma, a rare form of childhood cancer. He had a golf ball sized tumor lodged between his aorta and spine.

We have three boys now, but he was our only child at the time. Our baby. If you’re a parent, I’m sure you remember how protective you are of your first child. We were no different.

My wife Lisa was pregnant with our second when Michael was diagnosed. I distinctly remember every horrible detail of that day when our lives were changed. I picture where I was at work when Lisa called me, barely able to talk, as she sat in an ambulance with Michael. His breathing was poor and an x-ray showed a mass in his chest. I remember standing in the exam room when our doctor entered, clearly uneasy about the news she was about to break. I remember Lisa clutching her baby in agony, Michael wondering what’s wrong.

Sounds awful, I know. It’s an experience that my wife and I will never forget. Luckily, Michael remembers very little. All he has are some scars that he can show off to friends and a couple of very vague memories.

But he is one of the lucky ones. Michael will soon be celebrating his 11th birthday, and another year free of cancer. Eleven years that didn’t seem so certain a little over eight years ago.

I know that we parents get emotional when our kids do anything special. We’re definitely the same way. Whether it’s winning the spelling bee (again!), making a great play on his Little League team that I coach, being a thoughtful big brother or simply doing any of the typical things that kids do, the simplest accomplishments make me smile so hard that I have to choke back a tear.

So birthdays are a little different around here. To celebrate Michael’s 11th, as he has done with our support for seven consecutive years, he’ll be holding a lemonade stand to benefit Alex’s Lemonade Stand Foundation and childhood cancer research.

This is where the story gets long, but I’ll try to provide the short version…

Alex Scott founded Alex’s Lemonade Stand as a little girl who wanted to help kids with cancer. Alex, though, also had cancer. And she had neuroblastoma, that same cancer that Michael had.

But it wasn’t the same. I actually feel guilty for ever comparing the two. Alex’s was much more advanced and difficult to control. Michael’s was removed entirely through surgery.

I still remember seeing Alex and her family on the Today Show to tell her story. She told of how she wanted to hold lemonade stands to raise $1 Million to help rid of this terrible disease.

She was weak, but strong. She inspired us and she inspired a movement. Not long after that appearance, she would succumb to the disease, but her message is louder than ever. Kids and families from across the country will again be holding lemonade stands in her name.

So as the summer rolls around, we know that it’s time to shift our focus to baseball and Michael’s upcoming lemonade stand. Michael sets a goal, and we do all we can to help him accomplish it — and then some.

We always announce the stand to our friends on Facebook and we contact local newspapers and news stations. We tend to get a decent amount of coverage, and the generous people around us always help Michael reach that goal.

But I always feel like we can — and should — be doing so much more.

I don’t want any parent to have to experience what we went through. And it breaks my heart thinking of those families that dealt with much worse.

What Would You Do?

I’d love to get your feedback on how you think we should get the word out to help raise as much money as possible — not only for Michael’s stand but for the foundation. What would you do?

How You Can Help

Just reading this means that you’re helping. Thank you! But there are several other things that you can do.

You can donate to ALSF directly or you can donate to Michael’s stand. Now, I don’t expect you to attend. But if you’re in the Colorado area on June 8, you’re more than welcome to stop by!

Finally, I close with the video “What Do You Stand For?” that Alex’s Lemonade Stand recently put out. Michael opens it up…

If you watch closely, you’ll also see him appear later with each of his little brothers!

What do you stand for? I know I stand for Michael and the thousands of kids and families who deal with childhood cancer.

This has been a bit of a diversion from what I typically write about, but this was a post that I had to write. Thank you so much for taking the time to read our story!