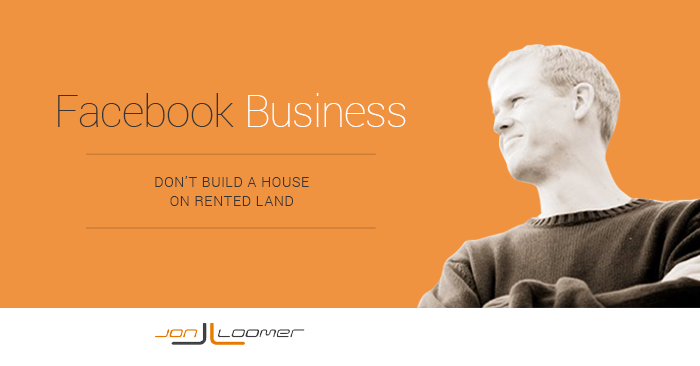 As I sort through my angry emails and Facebook messages (largely related to Facebook changing their algorithm again), there’s a common theme I’m picking up: An over reliance on Facebook.

I know, this sounds crazy coming from someone like me. Facebook is core to my subject matter. You’ve undoubtedly seen many of my ads on Facebook. Yet Facebook doesn’t even make up the largest percentage of my referral traffic.

My point today is more than not wanting to rely too much on Facebook. The same can be said for anyone whose business is mostly driven by a single website or social network outside of their control.

Today I want to give you an idea of where my traffic comes from. Additionally, we’ll get an inside look at the source of some of my online revenue. In the end, I’ll talk about my recommendations for how you can build your business without relying too heavily on Facebook — while also benefitting from it.

[Tweet “Is your business relying too much on Facebook? Here’s why you don’t build a house on rented land…”] 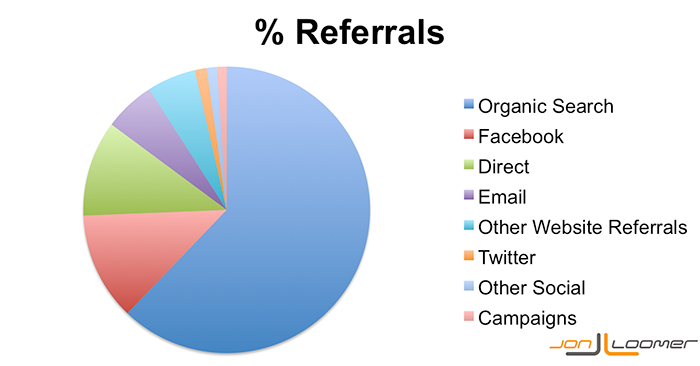 During the past three months, visits to my website can be broken down as follows:

[Note: I needed to extract Email from Direct. This will matter later.]

I’m not here to tell you that this is the proper breakdownBreakdown is a way to get insights into your ad performance related to time, delivery, action, or dynamic creative element. by any means. It’s only meant to illustrate that Facebook, while being my second biggest traffic driver, only sends 12% of my visits.

The amount of traffic driven by email is growing as I continue to build my email list. But I regularly will have days where a single email will drive 1,000 clicks to my website. The goal is to make this percentage as high as possible.

As you can see, Organic Search is by far my biggest traffic driver. Of course, Google makes up almost all of that number. While such a high percentage makes me nervous, this is actually down from being over 80% not long ago. And actually, the most recent 30 day period has organic search just under 60%.

It’s not that I want to get less organic search. Not at all, actually (it’s growing). I simply want to build up other methods (again, the main being email) to knock the percentage down a bit. While I do nothing that should upset Google, they can easily change their algorithm and send me less traffic.

On the surface, you might even question why I value the traffic so much from Facebook. I have over 35,000 fans, I post every day and I also spend a decent amount of money on advertising. Yet, Facebook still only drives 12% for me.

Well, that takes us to revenue…

Some of My Online Revenue Sources 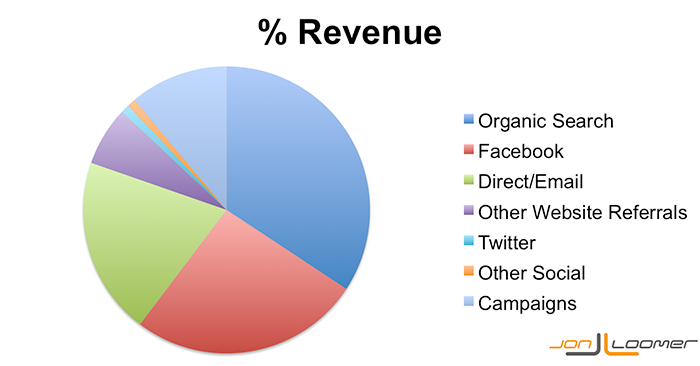 I also wanted to break down the percentage of online revenue I get as a result of this traffic. Keep in mind that this is inexact. It doesn’t include my one-on-one service because I’ve yet to figure out a good way to track it (no purchase redirect).

Regardless, we have a pretty decent starting point here. Below is the same list of referrers again, but it now also includes percentage of online revenue that resulted from those referrals:

[Note: Here’s where extracting Email from Direct becomes a problem. While I could dig further to get the precise percentage of revenue from email, I don’t have it available at this time.]

As much as I love Google, I get quite a bit of traffic from it that doesn’t lead to revenue. Organic search is still my biggest revenue driver, however.

But take a look at Facebook. Even though only 12.19% of my traffic comes from there, these visits lead to more than a quarter of my revenue.

Direct and Email, no matter how that shakes out, provides a higher percentage of my revenue than traffic. Same with Other Website Referrals (like Social Media Examiner and PostPlanner), which must be highly relevant.

Most efficient are the Campaigns. This includes ads on my site and other specific campaigns I’m tracking with URL parameters. Not a surprise that this does well, and I should do more of it.

I often get asked the question whether a website is even necessary. There’s so much you can do within Facebook, after all. And the amount of maintenance is lower.

There’s an old saying that I’m likely about to butcher: Don’t build your house on rented land.

I’ve seen too many businesses attempt to run entirely within a single social network. No website. No email list. Or those two things are very low on the priority list.

This is dangerous. And people who run their businesses this way are those who are bound to be most upset about any changes Facebook — or any other rented land — makes.

What This Doesn’t Mean

Some will assume I’m saying it’s time to pull out of Facebook.

No way! It’s all about how you use it.

You should absolutely use Facebook and other social networks to drive website traffic and revenue. But don’t allow all business to happen there. Don’t put your entire business at the mercy of those websites.

If Facebook blows up tomorrow, I’d certainly have to adjust my subject matter. But I’ve been building a house on land I own — as a result, I’m better able to withstand such an event.

Due to my efforts, other websites drive traffic to my site for me, and this also leads to the high amount of Google referrals.

Every piece has a role. But the pieces I own are most important to the success of my business.

What percentage of your traffic and revenue comes from Facebook, Google and other sources? What are you doing to keep as much as you can within your control?