[NOTE: This post continues a series exploring the topic of entrepreneurship. While my focus has and will continue to be on Facebook ads, I have plenty to share about what I’ve learned while building my business.]

Now that I’ve begun writing more about the day-to-day grind of entrepreneurship, I am getting flooded with stories from readers that follow a common theme: They are scared. They have an intense fear of failure.

They are paralyzed by this fear, and I can relate. I’ve been there. And looking back, I wish I could grab my old entrepreneur self, shake him, and slap some sense into him.

These things are all common for entrepreneurs. While normal, they keep you from experimenting, learning and ultimately succeeding. While I am self-aware these days, I can tell you that I still deal with this counterproductive behavior.

There Is No “Fail”

But that’s not what we typically define as failure. We define failure as poor results. And that’s a terrible approach.

Not everything is going to work the way you planned. Nothing is automatic. People aren’t robots. Crazy things happen. Bad results aren’t “failure,” but instead something you can learn from. 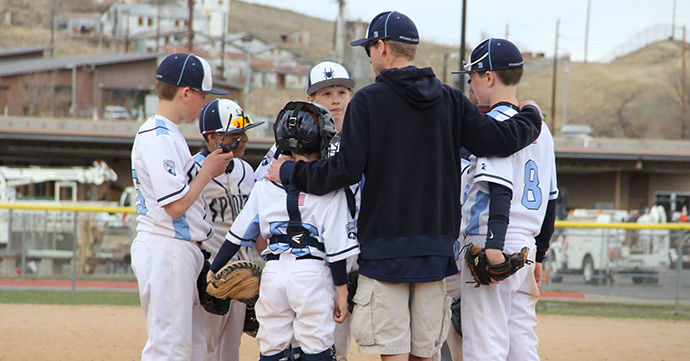 Those who fear dropping the ball on a tough play are more likely to let it drop in for a hit. It may not appear as an error, but that lack of effort prevented a potential out.

While telling these 13-year-old boys this, I refrained from using the word “mistake.” There are no mistakes. Everything we do is intentional. It’s just a matter of whether our intentional approach led to the desired result.

When the desired result doesn’t happen, we have to ask ourselves, “Why?” Was there something else we should have done? Was our approach correct? Did we do everything right, but it simply didn’t work out in our favor?

Whether you’re an entrepreneur or teenage baseball player, how do you react to things that don’t go your way? Do you blame the results? Do you dwell on them? Do you focus more on the results than the process that led to those results?

Do you learn from what happened?

The best athletes and most successful entrepreneurs have no apparent fear of failure. They swing for the fences, and they leave caution to the wind. As a result, you may not even notice the failures when they happen, but you notice the successes.

Be Willing to Embarrass Yourself

I would argue that we — entrepreneurs, young athletes, people in general — aren’t necessarily afraid of “failure” or making a “mistake.” We’re afraid of public embarrassment.

I again asked these same young athletes this simple question: “If you dropped a baseball, but no one was there to see it, would you be embarrassed?” They all shook their heads, “no.”

Of course not. And as a result, you’re more likely to take risks when no one is watching.

If we launch a product and no one buys it, is our biggest concern that it didn’t sell or that someone might see our business, our product, or the entrepreneur as an embarrassing failure?

Be willing to embarrass yourself. Get to the point where trying, doing and sometimes getting bad results is part of the process — not a source of embarrassment.

Don’t watch opportunities pass you by. Don’t sit back and wish for something to happen. Don’t blame results on things you can’t control.

Do something about it. Take risks!

Those who are best equipped to learn are those with the most experiences and the most data.

Note that I used the word “experiences” here over “experience.” You can have “experience” doing the same thing for years at a time while having very few “experiences.” And you can also have many experiences in a short period of time.

Every time you try something, it’s an experience — an opportunity to collect data and learn from it. Your goal, particularly in the early days, should be to create the most experiences — the most learning opportunities — as is possible.

Of course, you shouldn’t simply experiment without the connectionWithin your ad set, you can further narrow targeting by adding a connection to a page, app, or event that you control. of learning from it. Otherwise, it’s wasted action. It’s experimenting without a purpose.

When making an evaluation, here are questions to ask yourself:

Be the person who isn’t afraid to try something. You are your own boss now. Act like it.

Do you often ask for advice, using the phrase, “Should I…?”

While you should always tap into the knowledge and expertise of those who been there, don’t underestimate the value of finding out yourself through experience. Don’t overvalue one single person’s experience that may or may not apply to your situation.

It’s a phrase I often get related to Facebook advertising. Should I target Lookalike Audiences or interests? Should I optimize for conversions or website clicks? Should I create multiple ads for split testingSplit testing (or A/B testing) allows you to test changes in Facebook variables like ad creative, audience, or placement to determine which approach performs best.?

My answer is always a variation of the same: I don’t know. Should you? Try it. Experiment. There are no universal rules. Find what works for you.

Launch When You Aren’t Ready

Don’t be a perfectionist. Perfection is an impossible goal that will only lead to a perpetual feeling of dissatisfaction. And you won’t accomplish anything.

Admittedly, I’m dealing with this right now. I’ve been preparing to launch a community for entrepreneurs. I was originally going to launch it at the end of January. I decided against it.

Why? There was a combination of fear of failure (what if no one buys it?!) and feeling that it wasn’t ready. I’m spoiled with an audience of Facebook advertisers who provide me the confidence to launch Facebook ads-related products. But I don’t have that same confidence with a new topic.

So really, it’s a bit like I’m starting a new business from scratch. I don’t have the luxury of a built-in audience that I know would buy an entrepreneur-focused product. I have unknown, and that unknown creates uncertainty.

But as I look back through the past five-plus years, every product launch of mine has been a success. Note that “success” doesn’t mean that it resulted in a high number of sales. “Success” means that I immediately received data that I learned from, allowing me to improve and adjust.

My first product launch came after months of worry. I didn’t know what product to create, how to create it, how to sell it or how to promote it. I eventually, sent an email with a PayPal link to pre-order a product that didn’t exist yet.

Spur of the moment. Imperfect. Not ready. And it was the best thing I could have done. I immediately learned from the results. And all of those months of worry immediately looked silly.

The launch is exciting. It’s intoxicating. And, yes, it’s a little scary. But embrace it! Each new launch takes you a step closer to your goals, even if that product isn’t “perfect” or “ready.”

How do you relate to the topic of failure?