If you know me, you’re well aware that there are two topics that I love to talk about: My three boys and baseball. If you combine the two, I’ll never shut up.

This is my favorite time of the year since my life is dominated by both as I coach my oldest son’s Little League team. The highlight for me this season has been keeping them motivated while they are getting beaten, only to come back in the end for a glorious victory. 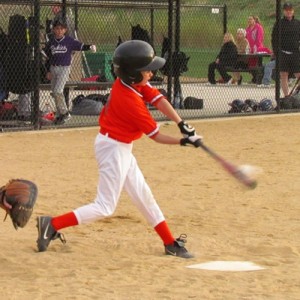 This is what happens when you stay focused and aggressive!

It’s easy being the coach when your team’s winning. The real challenge is when the team or individual players are struggling. That’s when you earn your non-existent salary as a Little League coach.

Those times are even more challenging when the struggling player is your own son. Michael, who is as dedicated as they get, just wasn’t getting the results at the plate. For the first time, he was starting to doubt himself.

As I’ve given Michael and the other Giants advice this season, I’ve quickly realized something: there are very close parallels between what I tell my players and what I tell you and my clients as your digital marketing and social media coach.

Don’t believe me? Read on… Here are the six things that marketers can learn from Little Leaguers:

Michael’s curse is that he’s the caoch’s kid. It’s good and bad, I guess. But he knows my coaching philosophy through and through. He knows that I want to make the pitcher pitch, and that I don’t trust Little Leaguers to throw strikes. He knows that I think a walk is just as good as a hit.

But that approach can backfire, and it did in the case of Michael. He started to struggle. When he put the ball in play, the defense was throwing him out. When he took the first pitch, it was always down the middle. He then started looking for walks and had a hard time pulling the trigger.

He was quickly losing confidence. I told him to forget everything I had told him before. I reminded him that he was a great hitter and to go up looking for something he could hit. “Don’t wait for another one,” I told him. “Be aggressive and hit it hard!”

Michael fought out of his slump. This can happen to marketers, too. You can be too careful and too passive. A few things don’t go your way, and suddenly you’re afraid to take risks. You don’t make changes. You sit back and make conservative moves.

It’s one of the worst things you can do. You know you’re better than that. Be a confident marketer. Do things that no one has done before. Be aggressive!

The failure to hustle is my biggest pet peeve as a coach. Whether you have plenty or little talent, everyone should hustle. If you hustle from the second you leave the box or your current base, it will lead to several hits that you wouldn’t have gotten otherwise over the course of the season. This also leads to more runs and more wins.

It’s something that also prevents major slumps. An example was when one of our players, who was having a tough time at the plate, hit a grounder to the second baseman. He watched that ball go and didn’t really start running until the fielder bobbled it. Our hitter was thrown out by an eyelash.

He thought he was safe. He blamed the umpire. It’s easy to blame everything else around you when things are going wrong. It feels like the world is out to get you.

The same goes for marketing. Don’t get lazy. I had a busy night tonight and I could have easily skipped my scheduled blog post. But I didn’t. I know that if I hustle — if I keep to my routine — good things can happen.

It doesn’t mean that every time you hustle you’ll get a hit. But it means that if you always hustle, you’re increasing the likelihood of a positive result. So, marketers: Always hustle!

3. Take Care of What’s In Your Control

It’s easy for Little Leaguers to get overwhelmed by everything that’s happening around them. The umpires aren’t very good. Maybe their teammates are making errors. Or they keep hitting the ball right at defensive players who are making spectacular plays.

Some things are just outside of your control. You hit it hard but it was caught? Good hit. You played a grounder cleanly and threw late to first? Good play. You threw a pitch at the knees and the umpire called it a ball? Nice pitch.

I focus more on process than results. While the ultimate goal is to get a hit, score a run, get the other team out and win the game, the process to get there is most important. If our team did everything they were coached to do and still lost, it’s okay. The process is sound. Chances are, if they do that again they’ll win — a lot.

Same thing with marketing. There is so much that is outside of our control. I create content that I think people will love, and it gets no hits. Just as soon as I think I have Google figured out, it ignores me. Or I’ll strategically make a specific type of post on Facebook at a specific timing, expecting success and… nothing.

It happens. Some things are simply out of our control. But keep to the process. The results will not always be immediate. Keep sticking to the plan and your results will come.

One of the most common mistakes Little League hitters make is that they are too anxious at the plate. The glory is in the big hit. So they’ll go up there without much of a plan and hack at a ball over their heads. On the next pitch, they’ll chop at a ball in the dirt.

This is all about focus. Sometimes I’ll take a kid aside who I think is unsure of the strike zone and tell him to take until the umpire calls a strike. Other times, I’ll tell him (making a small box with my hands): “Look for it in a small area. Focus on a spot. If you get it, HIT IT!”

It’s all about focus. The same can be said for marketers. We need to have a plan. We can’t go up there hacking at Facebook, Twitter, Pinterest, Google+, YouTube and every other social network.

In practice today, I ran a drill where I tell my fielders the situation (outs and runners on base) and hit it to a base. It’s up to them to know what to do with it.

A few times, I hit it to various fielders, and they looked around the field frantically before deciding on a destination for their throw. They just didn’t have a plan.

The biggest mistakes in baseball are mental. Not knowing the situation. Making unnecessary throws. Running on a fly ball when there is only one out. Failing to run to first on a dropped third strike. Swinging at a ball over your head on a 3-0 pitch when the pitcher just walked the bases loaded.

Physical mistakes are going to happen — and they will happen a lot. But the main thing I want my players to understand is the mental side. Think through every scenario before it happens. Know your responsibility.

We also need to anticipate as marketers. Don’t simply react, frantically looking around the field for a base to throw the ball to. Know ahead of time the situation and what you need to do.

Just like baseball, the digital world isn’t always predictable. But there are certain scenarios that you can plan for. For me, a good example is the launch of Facebook Timeline for Pages. I knew it was coming. I was prepared for it. I knew what I was going to do when it came out. And when it did, I jumped in and pumped out 40 tutorials in a month.

Always be prepared and have a plan!

Look, sometimes you can do all of these things and it still seems like a kid can’t buy a hit. He’s aggressive, has a good approach, hustles and he just can’t make contact. He just can’t field a grounder cleanly or make an accurate throw. It happens.

But that doesn’t mean he can’t have value to his team. The biggest thing he can do is remain positive. A baseball player can be his own worst enemy when he gets into his own head. So I always work with these struggling players to make sure that they keep a positive outlook. It’s especially important for the leaders to do this and set a good example.

Maybe nothing is going right. But do the little things that have value. Cheer on your teammates. Talk about scenarios so that others are ready. Help warm up the pitcher when the catcher is getting his gear on. Be a good leader.

Sometimes, things never seem to go right for us marketers, too. Nothing we write is getting any hits or being shared on social media. We’re having technical issues with our sites and we’re not making enough money.

But you can’t let it get you down. Don’t get into your own head. You’ve got to remain positive and do the little things to add value. Be a good team player and encourage others in your blogging community. Help out someone who needs a hand. Keep plugging away, and things will turn around.

Maybe I’m crazy, but I’m finding more and more of these scenarios with kids that have a very close correlation to the business world.

Have you noticed any other tips marketers can learn from kids? Give an example below!