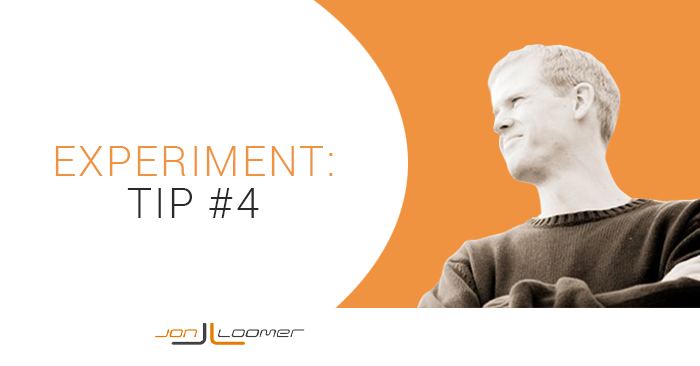 In Tip #3, we talked about targeting people based on the specific page they visited. But what if you want to exclude people from your targeting based on the pages they’ve visited?

Here’s an example in action for promoting Tip #3…

I targeted those who read Tip #2 for a 14 day duration because I figured if they haven’t clicked my ad within 14 days, they no longer wanted to participate. I also wanted to allow as much time as possible for people to have the ad served to them. There is never a guarantee regarding when — or even if — an ad will be served, so I needed to leave that duration as long as possible without wasting too much money (ultimately, some money is wasted with each passing day, but that’s the price I paid to reach as many people as I could).

I excluded those who read the post already within the past 180 days because if they already read it, there’s no reason to spend money to show it to them again. That’s also why I made the duration the limit of 180 days.

And finally, I allowed people to opt out of the experiment by visiting a particular page. Again, if they ever visited that page, there’s no reason to show them another ad related to the experiment. Therefore, I set the duration at the limit of 180 days.

While the experiment was a huge success, there were clearly some holes in this logic. I would love to show certain content to only specific people. Things don’t always work out that way.

First, some people were served ads and simply didn’t see them. We’ve been trained to ignore ads, and I’m sure that some who claimed to not receiving my ads were simply missing them.

Second, as mentioned earlier there was no way to guarantee that EVERYONE would be served my ad. And if they were, I couldn’t guarantee that it would happen quickly. It may have been within a few minutes or a few days. Or maybe not at all. I controlled that as much as I could with bidding and budgeting.

Third, I imagine that those who clear cookies, block cookies or surf incognito weren’t being targeted or excluded properly. I’m not positive on this, but I assume that it caused problems.

Finally, there was an issue of organic distribution that I never considered before starting this experiment. I did not distribute any of these lessons — or the initial invitation — via an organic post. I only served them with ads. 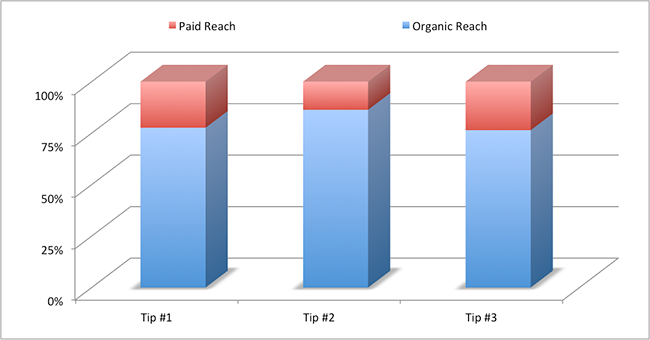 At this point, more than 80% of the reach of my Tips “ads” had been organic. Since I was not publishing these ads organically, this could only be due to the insane engagement on the ads — comments, likes and shares — that were then attracting other people.

Note that Facebook stops counting a person as being reached organic once they’ve been reached as paid, so that actually deflates the way they report organic reach. So in reality, I reached even more than this number organically.

A future tip will take a closer look at how organic distribution impacted this experiment.

Something else that seems to have happened is that Facebook is more actively surfacing content when a page you like comments. So it’s also likely that a decent chunk of the organic distribution is due to me replying to the dozens and dozens of comments I had been getting.

People Visiting Specific Web Pages But Not Others

I wanted to show you how I ran my experiment, but I also want to include a few bonus tips.

When creating a Website Custom Audience, you also have this option… 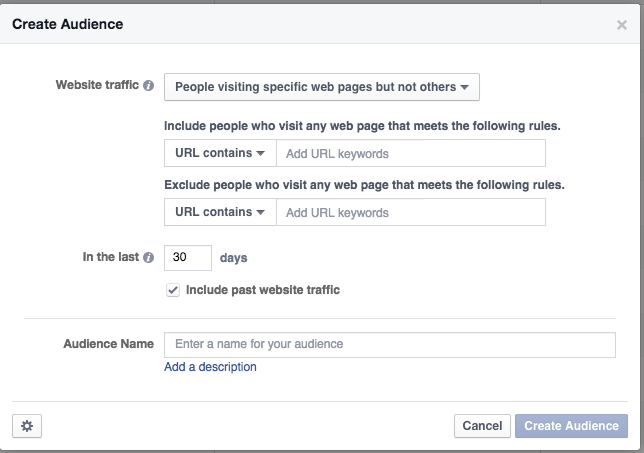 In reality, I could have used this method to create a Website Custom Audience for those who visited Tip #3 but exclude those who viewed Tip #4 or the opt-out page.

I chose not to because the Website Custom Audiences for individual pages are then more flexible and can be used for multiple purposes. I could use a single WCA to target or exclude. Additionally, the method of combining “include” and “exclude” within the same WCA removes the flexibility of different durations for each page.

I guess it also comes down to personal preference, but that’s how I chose to run my experiment.

This experiment already outlines some pretty obvious reasons why you’d use exclusionary logic. But let me hit a couple more use cases that I use in particular…

1) Promoting a Blog Post. Within seconds of publishing a new blog post on my site, I’ll create a Website Custom Audience. There are two reasons for this. First, I may want to promote something related to that post later, so I’ll want to reach those who read it. Second, when I promote that blog post, I’ll want to exclude those who already read it since there’s no reason to spend money to show it to them again.

2) Promoting a Product. This especially comes into play when promoting a one-time-purchase product. If someone has already bought my training course, for example, there’s no reason for them to buy it again (might not be the case for physical products, however). So I’ll create a Website Custom Audience for the “thank you” page that they see following the purchase. I then exclude the people who visited that page during the past 180 days when promoting the product.

Of course, I also exclude the email list of those who bought, but that may not be dynamic (you can use third party tools to help with this), and it’s often not the same email address as used for someone’s Facebook profile. That’s why I exclude both.