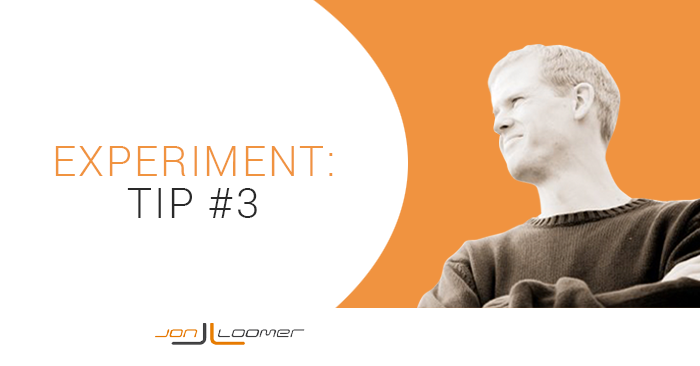 In Tip #2, we talked about casting a wide net so that you could attract relevant people (Facebook fans, website visitors and even Lookalike Audiences) into your funnel. Now it’s time to start building your funnel by serving content to people who viewed a particular page.

We’ll start with the basics of how to do this before moving on to how I used this type of targeting for my experiment.

How to Target by Page Visit

While you’re on the Audiences page within Power Editor or Ads Manager, click to create a Custom Audience… 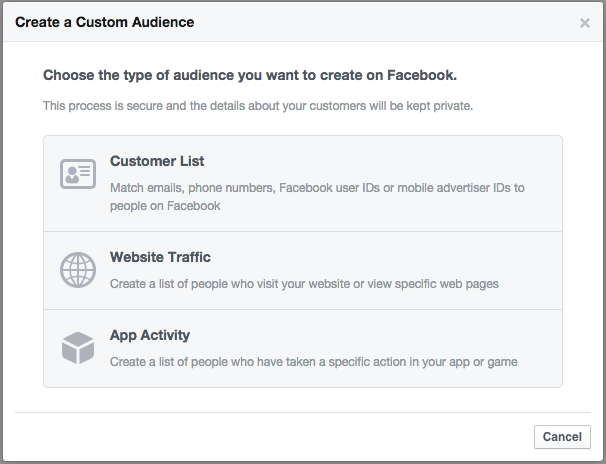 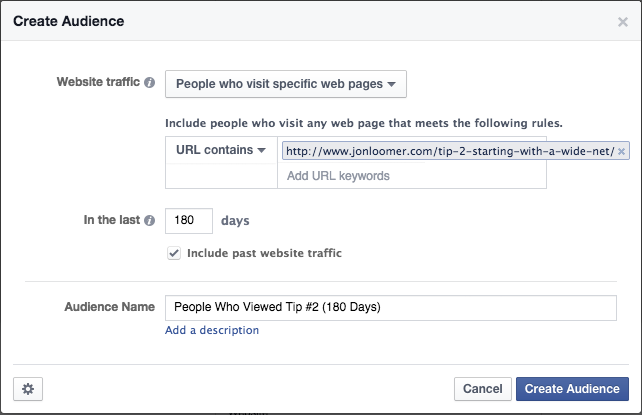 Make sure to name it something very descriptive so that you’ll know what it is later. You will have duration options of 1-180 days. By default, Facebook chooses 30 days.

Also by default, the audience will be based on “URL contains” whatever you place into the text box. In the example above, I pasted the entire URL for a particular article.

You could also include only a portion of that URL… 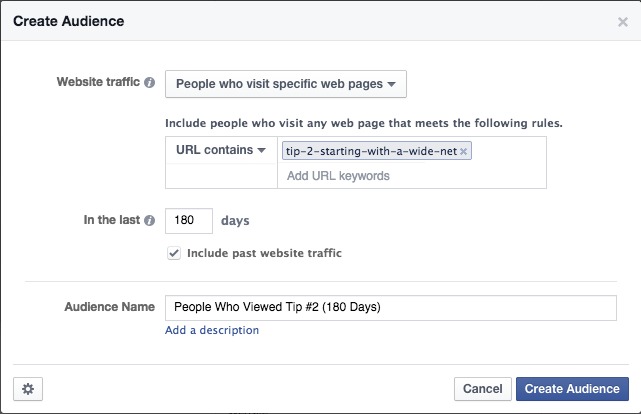 Or you could select “URL equals” and enter the entire URL… 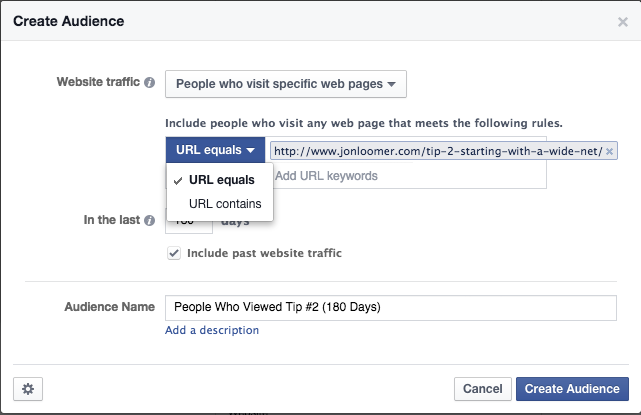 First, if you use “URL contains” and enter only part of the URL, it’s possible that multiple pages of your website will contain that same URL segment.

Second, if you use “URL contains” and enter the entire URL, it’s still possible that more than one page would qualify. Think of the following as an example:

If I used “URL contains” and the full URL of https://www.jonloomer.com/my-product, there would be two pages that would qualify.

Finally, just make certain that if you use “URL equals” that you use the same URL that everyone will use. For example, can some people access via http and some via https?

Once you’ve created this audience, you can target it within the Custom Audience text box when creating your ad set.

We’ll get to excluding later!

I first created a campaign that invited people into my experiment.

As discussed, I primarily targeted my Facebook fans and website visitors during the past 30 days, but I also experimented with Lookalike Audiences.

I then create a second ad that welcomed any new participants into the experiment. 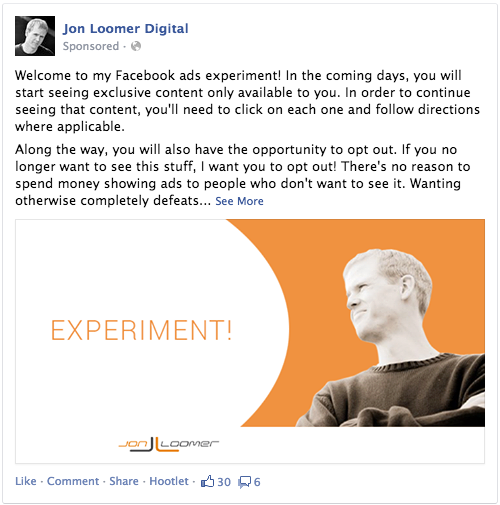 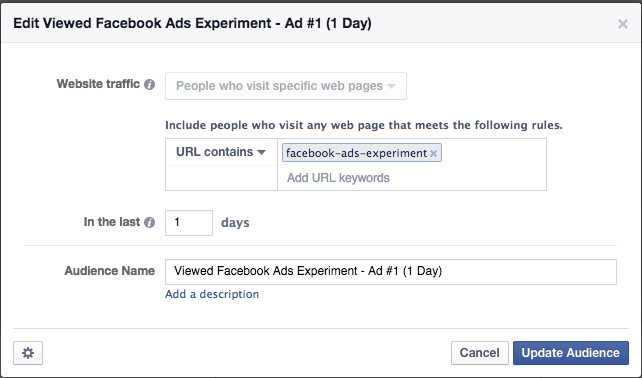 Note that the duration in this case is only 1 day. That way I wouldn’t spend money welcoming someone to the experiment days after they’ve joined.

I also excluded audiences, but we’ll get to that later! 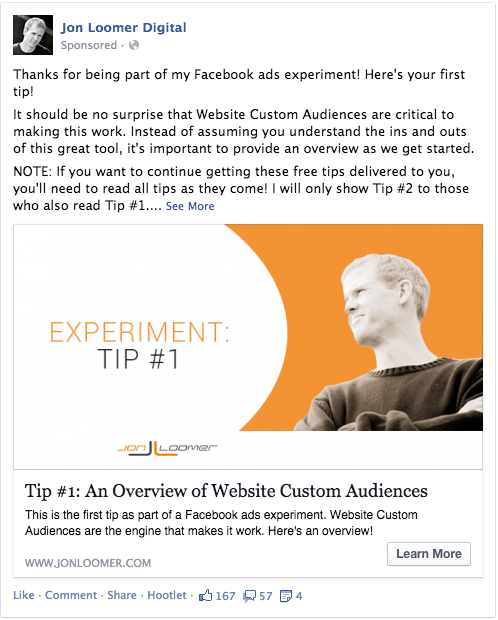 In this case, targeting was nearly identical to that of the welcome ad. I again wanted to target people who clicked the first invitation ad and viewed that article. In this case, though, I wanted the duration to be longer than 1 day. 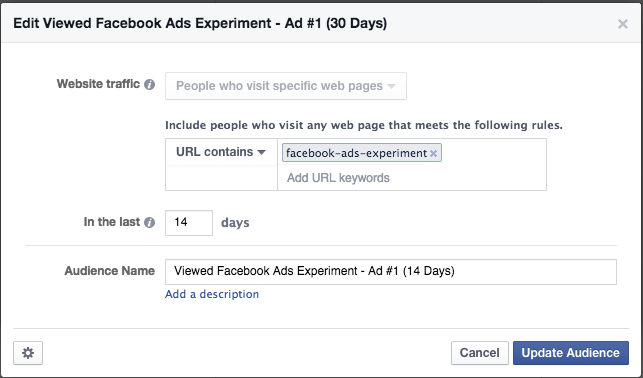 I chose to keep the duration at 14 days. I certainly wanted to show the ad for longer than a day after entering the experiment, but I worried about cutting it off too soon. I wouldn’t reach everyone initially with the ad, so I wanted it to run longer to give people the chance to continue.

At the same time, I didn’t want to waste too much money on people who didn’t want to participate any longer! Ultimately, my ads were most efficient on the first day and the cost per website click would go up over time, but that was the price I’d pay to make sure everyone who wanted to participate had a reasonable chance (in this case 14 days) to see the ad.