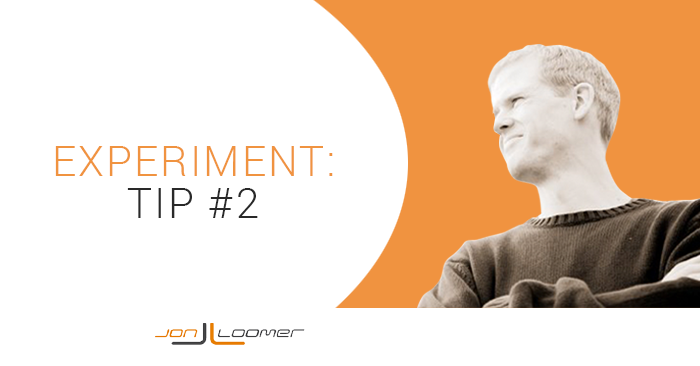 Since you’ve read the first tip, you have a general understanding of how I ran my experiment. Or, at least you can start making some basic assumptions.

You know that I used Website Custom Audiences. Yes, this is true. But it’s far more complicated than that.

My goal for this campaign was to find the select number of people who would be willing to participate in an experiment with me from start to finish. I expected attrition, and I needed to account for that.

This is similar to a membership. Let’s say that 100 people agreed to take on the initial challenge. I’d expect some to drop off with each new step. With 13 total steps, how many would be left at the end? Going into this, my guess is that out of 100, it would be in the neighborhood of 20.

I budgeted about $100 per day for this campaign that ran about 60 days. This includes a “ramping down” period where I shout off the initial ad to let those in the funnel work themselves through.

The vast majority of the campaign was spent on attracting the first group (the individual remarketing groups for each tip was small). If the targeting is good enough, I expected about 3% of those who saw the initial ad to click the link to participate.

If we assume about a $5 CPM, that’s about 20,000 people targeted each day resulting in 600 new daily participants. Of course, we’d expect that number to drop every day as those who click are no longer targeted and those who don’t become fatigued by the ad.

That’s a lot of math, right? Hang with me…

For that first ad, I had Facebook optimize for the website click, allowing Facebook to automatically bid and optimize (formerly referred to as oCPM). I’ll get to more on bidding in a later tip — expect my approach to change in other ads.

Understand that when Facebook optimizes for an action, they won’t show it to everyone within your potential audience. You don’t want them to do that at this point. You don’t want to waste money on people unlikely to act.

I’ve even found this to be the case even when you have a highly relevant audience. Facebook’s auto-optimization is fantastic.

But since Facebook doesn’t show that ad to everyone, I needed a starter pool of people far bigger than 20,000 people. It’s up to you how big you go, but I’d recommend at least 200,000 (you could easily go well beyond 1 Million).

It may be a personal preference, but I like to keep that initial pool as relevant as possible without branching off into Lookalike Audiences. And if I do use Lookalike Audiences, I want that targeting to take up a minority of my budget.

We’ll get to the groups you should be targeting in a minute (and the groups I targeted for my experiment). But first…

You may have seen this. It’s possible, though, that you haven’t since some reached my tips due to friends participating in and engaging with the experiment.

This same ad was shown to three different audiences. I created three ad sets, one for each audience.

I first started with $25 budgets for both fans and my website visitors during the past 30 days (who aren’t fans). Fans performed extremely well, so I doubled the budget.

I also experimented with Lookalike Audiences (based on my fans) because I wanted to get greater volume. Lookalikes didn’t perform at the rate that fans and website visitors did, however, so I eventually deactivated this group.

I chuckle whenever I hear someone say that likes no longer matter. That there’s no value in page likes anymore, and that you should certainly never run ads to increase that audience.

I know that I’m increasingly in the minority of people who disagree with this stance, but I disagree because of the results I see. Not only does organic reach still exist, but this is an extremely valuable group of people to target with ads.

Let’s assume for a moment that organic reach no longer exists at all (it does, but hang with me). Even then, there would be value in a like.

Why? Because by liking your page, a user is separating themselves from the herd. You previously saw that user as one of hundreds of thousands or millions with similar interests. That group, by itself, has limited expectations for performance.

By liking your page, that user is placed into a bucket. I then target that group to drive website traffic, build my email list and sell products.

You know what? I have more success targeting fans than any other group. So, yes. Fans (high quality fans, of course) really do matter!

So when I started that first campaign, it was a no-brainer that I target fans. However, since I can’t target all fans regardless of country (you can do this with Custom Audiences), I focused on eight main countries to start.

This, in addition to Facebook’s optimization, significantly limited the size of the audience that saw my ad. So while I may have started out with 75,000+ fans I could target, I reached closer to 27,000.

Depending on the size of your fan base — and the budget you want to spend — you may be able to stop here. But you may need to expand the net further…

It’s what made this entire experiment possible!

I advise that you create dozens — if not hundreds — of Website Custom Audiences for targeting purposes. Even when it comes to “all website visitors,” I’ve created many variations based on duration, going from one (smallest audience, but most relevant) to 180 days (largest audience, but least relevant).

By targeting users who have visited my website during the past 30 days but aren’t fans (I’m already targeting those people in a separate ad set), I can reach another 125,000 people. If I limit my targeting to eight core countries, that number falls to about 75,000.

For this experiment, I was looking for the happy medium between large audience and hugely relevant, so I chose to limit by country. But this filtering was eliminated later in the experiment.

Maybe you don’t get much website traffic, or maybe you’re looking to spend far more than I did. In that case, you’ll need to expand the net even more…

Whenever I start a new campaign, I will always start with fans and website visitors. They are most relevant and most likely to act. It’s why I work so hard to build those audiences.

But Lookalike Audiences are a great way to reach a larger audience. This is appropriate for anyone who is starting an audience from scratch or simply can’t get enough out of fans and website visitors.

When you create a Lookalike Audience, Facebook will look at the similarities between the people who are within an existing audience of yours. Facebook will then build a list of users most similar to them.

This essentially automates the process that is otherwise done manually when you sit down to determine the best interests, age groups, demographics and more to target. Some advertisers have found this to be hugely effective.

I find Lookalike Audiences to be a nice next step. They are a decent group to target for “light” actions (page likes, post engagement and website clicks). But I don’t rely on them for “heavier” actions like opt-ins and sales.

Since my experiment relied on traffic, I figured I’d mess around with Lookalike Audiences. However, I was also skeptical I’d get much return since I needed a certain level of time commitment to participate (later confirmed).

Facebook can create Lookalike Audiences based off of any of the following:

What you use may depend on the situation. If I were trying to sell something, I may focus on the conversion pixel. But what I wanted to do for this experiment was drive traffic.

In this case, I chose to use a Lookalike Audience of my fans because this group (fans) generated the most efficient website clicks.

Of course, you can also generate an audience the hard way — by manually entering interests.

Before doing this, I strongly recommend that you dissect your current audiences using Audience Insights. From there, you can determine the ideal ages, countries, interests and more that you should be targeting.