Mashable published an article the other day that induced convulsions, tirades, rants and migraines. The title:

Okay, Mashable. I’m doing it wrong. Quite the attitude you have there. Please explain.

If you’re looking to take a day off from posting on Facebook, choose Wednesday, but don’t rest on Sunday or you’ll miss the best opportunity of the week.

That’s the advice from Buddy Media’s “Strategies for Effective Wall Posts: A Timeline Analysis,” a report based on activity from 1,800 of the world’s biggest brand pages from April 1 to May 31.

Oh, boy, here we go. Another one-size-fits-all generic template to make us all post at the same time with the same, tired techniques.

I give Buddy Media a pass here. They created a report that includes the massive amount of data they have to show how massive and awesome they are. When you have all of that data, you might as well do some crazy stuff with it.

But Mashable takes it far too literally. The thing about these studies that we all need to remember is that they are averages. They mash up every industry, every sized brand, every location into one report. The end results may make for an interesting read, but they don’t necessarily mean anything to your brand.

Wait, between 8pm and 7am in what time zone? Eastern? Mountain? Central? Something else?

Only half of my Facebook Fans are in the US. I have just about every time zone represented.

So tell me, what would you consider “off-hours?”

Exactly, you can’t. It’s why I schedule two posts per day — one that happens in the early morning and one that happens late at night (my time). I’m constantly shifting those times to reach as many people as I can.

There is no true “best time to post.” What works for you may not work for me.

But let’s just say, for argument’s sake, that everyone in the world agreed that they’d like to see your cat pictures between 8pm and 7am EST. It becomes public knowledge that this is the time to post.

You know what happens when everyone posts at the same time? It’s no longer the best time to post.

Buddy Media (and Mashable) suggests limiting your posts to 80 characters. I’ve seen that number before. It’s close to impossible.

Are you familiar with Mari Smith? Yeah, she’s kind of a big deal in Facebook Marketing. She’s notorious for her long posts. One of her posts that has received 90 shares, 185 Likes and 122 comments (so far) is taking up pretty much the entire right side of this blog post.

Wanna know how many characters that is? 2,084. I pasted it into Word and it went to two pages. Just a shade over 80 characters.

Mari is successful because she’s not only knowledgable, but people like her. She has a unique, conversational voice. Mari would lose much of what makes her who she is if she limited her posts to 80 characters.

This horrible, say-nothing, soul-less, boring sentence is what 80 characters loo

looks like! Come on, let me finish my sentence!

Here’s the funny thing: They also suggest you use questions and calls to actionA call-to-action is a button or link on your ad that suggests the action you want your audience to take. Examples: "Learn More" or "Sign Up.". In 80 characters.

Do you know how hard it is to post anything of substance with a call to action and/or a question and keep it under 80 characters? It’s pretty freaking difficult.

Your first focus should be on your voice. Have personality. Have a soul!

3. “Ask Fans to caption a picture”

Oh, yeah? Should I also make sure it’s a picture of a cat?

Seriously, are Mashable and Buddy Media just looking to highlight all of the types of posts I hate?

4. “Fill in the blank is another good option”

Oh, sure it is. If I want to hate myself.

This works for some people. But if it’s not you, don’t force it.

Are you freaking kidding me? It just keeps getting worse…

Apparently, posts with emoticons receive 52% more engagement. You know what kind of engagement that is? Probably a bunch of people telling them to stop using emoticons.

Next thing, you’ll probably actually suggest which types of emoticons I should use. :[< (that's a frowning dude with a handlebar mustache)

AHHHHH! THEY DID IT!

Again, these kinds of reports are sometimes a “nice to know” type of thing. They are kind of fun for entertainment value.

But please… Please don’t be a cookie-cutter marketer.

You should absolutely post with a purpose in mind. Think about the goals of your post. Think about what will get your audience to notice and participate in that post. But do it without losing yourself and looking or sounding like everybody else.

Could you imagine a Facebook where every Page was posting at the same time, asking questions with a call to action, using fill-in-the-blank and “caption this” with emoticons?

I don’t want to be part of that Facebook. 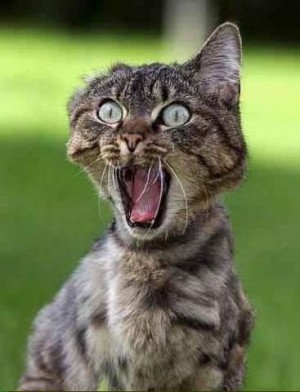